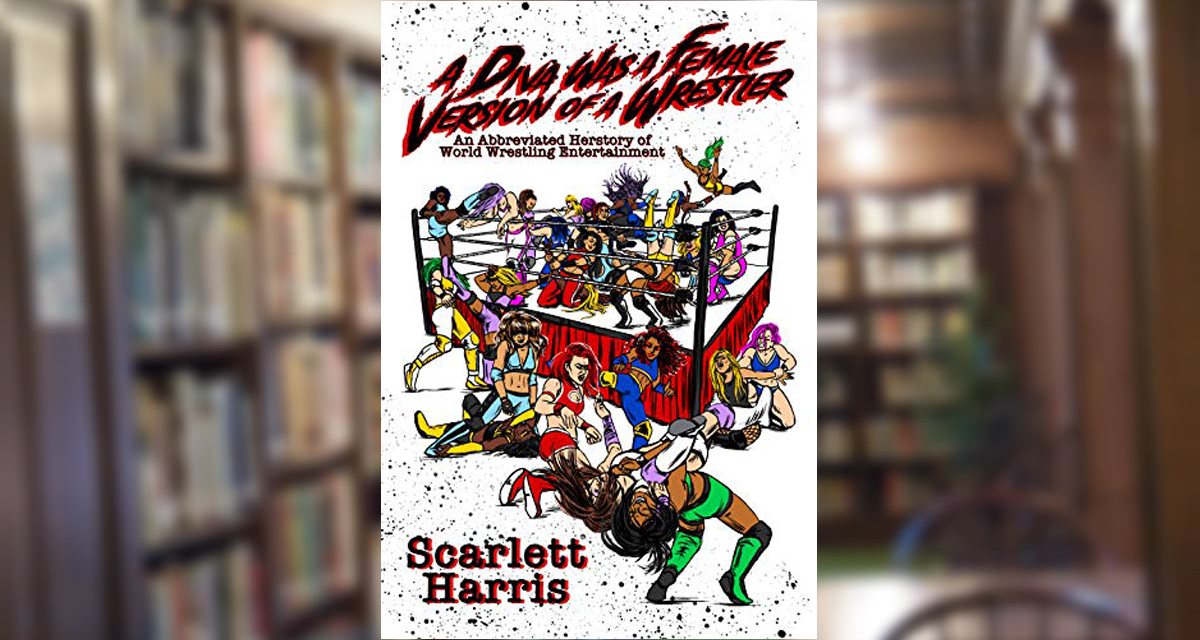 Kermit the Frog famously lamented that “it’s not easy being green.” Well Kermit, it’s not easy being a fan of women’s wrestling, especially if you are a follower of World Wrestling Entertainment (WWE). But now readers can further explore/commiserate/laugh over all the facets of this hardship in Scarlett Harris’ first book, A Diva Was A Female Version of a Wrestler: An Abbreviated Herstory of World Wrestling Entertainment, out now from Fayetteville Mafia Press.

“For years we (women’s wrestling fans) grasped at any straws thrown our way,” wrote Harris, who is from Melbourne, Australia, in the book’s prologue. “That’s what happens when a historically misogynist industry retroactively factors women into its marketing plan, instead of making them a priority from the beginning, I suppose.”

This reader has been a fan of what comes out of Harris’ brain since first being exposed to her prose with her contribution, “Fantasy Wrestling Federation: The Role of the Fan in Modern Wrestling” from the Women Love Wrestling anthology edited by Jason Norris. I’ve also savored her deliciously thought-provoking tweets on Twitter. With her trademark sharp and fearless wit, Harris provides an overview of the WWE’s portrayal of women in its programming from the days of the Fabulous Moolah to the origins of the problematic “diva” moniker and the women’s evolution movement which saw the corporation patting its own back even more than pro wrestler Barry Horowitz. 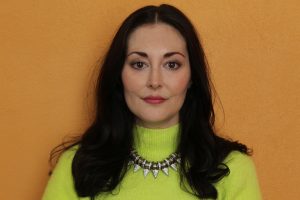 “A Diva Was A Female Version of a Wrestler is loosely chronological ranging from the 1950s to the ‘end of women’s evolution,’ as WWE dubbed it: the first women’s main event of WrestleMania 35 in 2019,” summarized Harris in the book. “I have also included a handful of notable happenings after that, such as the first women’s match in Saudi Arabia and some developments with the Four Horsewomen (consisting of Becky Lynch, Sasha Banks, Bayley and Charlotte Flair). But it’s not a history lesson chronicling every woman in WWE’s wins and losses. For that you can checkout some of the books I’ve listed in the ‘Women’s Wrestling Syllabus.’ Rather, I group wrestlers and ideas together to look at what they mean to the industry and culture in general, with reverence that often wasn’t afforded to them at the time. Or even now.”

Harris, who has had her work published in media outlets including The New York Times, Playboy and VICE, is definitely a writer who doesn’t pull any punches and is both articulate and bold with her bluntness. And while I’m sure there will be some readers who will write this book off as just another feminist take on pro wrestling, I genuinely feel sorry for them as they will be missing out on pages that are intriguing, contemplative and definitely not stuffy.

As I was reading Harris’ book, I found myself embracing my inner “Stone Cold” Steve Austin, as I often circled passages and wrote “Oh hell yeah!” next to them. I also frequently scribbled (I’ve often been told my penmanship resembles that of a first grader) the question, “Did she really just write that out loud?” and the word “Yes!” more than Daniel Bryan has ever uttered that word throughout his time in the WWE.

Let’s take a look at just some of the highlights for this reader from the following chapters:

-“The Woman, The Myth, The Moolah: The Fabulous Moolah & How We Tell Women’s Stories in Wrestling.” This chapter deftly chronicles the controversies/successes of the late female wrestler whom Harris says along with the WWE “largely casts a shadow over their (the women of the WWE) contributions to the industry.” It’s in this chapter that Harris also ventures into the WWE’s “foray into the Middle East.”

“The furor from fans – myself included, in one of those aforementioned moments that made me question my patronization of this company – when WWE expanded its Middle Eastern presence into the conservative Muslim country Saudi Arabia in 2018 was loud,” critiqued Harris in the book’s first chapter. “Prior to Saudi Arabia’s involvement with WWE, as part of its Vision 2030 campaign to portray a more progressive country to the rest of the world, women were not permitted to play sports there. The tandem promotion of WWE’s Saudi Arabian shows and its women’s evolution – the (WWE’s) Evolution pay-per-view was held the same week, which some proponents of gender equality saw as a consolation prize – hinted that WWE’s end goal, aside from the money, was the good press that would come with being the first company to host a women’s sporting contest there (the Natayla vs Lacey Evans match in 2019).”

-“The Tragic Journey of the Women’s Wrestling Trainwreck.” In this reader’s favorite chapter of the book, Harris really calls out WWE. “Society loves a bad boy made good,” observed Harris in the book’s second chapter. “Professional wrestling is no different; it’s a wasteland of bad men who’ve committed intimate partner violence (IPV), sexual assault, and, in some cases, even murder. Let me count the ways…” Harris then points out the sins/crimes/allegations of male wrestlers including Scott Hall, Jimmy Snuka, Jerry Lawler and Hulk Hogan, who continue “accumulating accolades while leaving fallen women in their wake” or as Harris points out, at the very least they get the WWE documentary treatment.

Harris points out that “women in wrestling have not been beneficiaries of the redemption story,” citing prime examples including Miss Elizabeth, Sensational Sherri Martel, Luna Vachon, Chyna, Sunny and Ashley Massaro. But it’s important to note that instead of patronizing or acting holier than thou towards those she has dubbed “the trainwrecks of women’s wrestling,” Harris has chosen to tell their “long-silenced story” by giving them “the same reexamination” normally reserved for their male counterparts.

-“Bad Twin: The Empowerment Doublespeak of the Bellas.” Now I will admit I was surprised I enjoyed this chapter as I’m not a fan of the Bella Twins. I, a self-described quirky introvert, just never related to them. For me I was always about bringing on the oddballs (and I say that with love) like AJ Lee, Chyna, Martel and Vachon. This chapter really showcased Harris’ ability to not only be a critic (which is a personal trait she shares she is often critiqued for), but also an advocate. Even though she is a fan of the Bella twins, and I’m still not one, Harris recognizes and reflects on what also makes the Bella Twins “bad.” Just one example being how the twins constantly preach a message of empowerment without truly acknowledging ALL the powers and advantages that led the twins to success in the first place with the WWE, reality television and beyond.

“While empowerment might have been well and good for the Bellas pre-women’s evolution, power is what they now possess, running a multimillion-dollar conglomerate,” declared Harris in the book’s fifth chapter. “What they don’t seem to understand is that they’ve achieved this due in part yes, to their hard work, but also their class and pretty privilege, and how they can leverage that to empower other, less fortunate women.”

Or another way of looking at it, if the Bella Twins were bestowed with more pedestrian looks, they’d sell a lot less clothing and wine. They’d be looking at peddling bug spray and camping supplies at best!

Harris concluded at the end of the chapter, “I wrote at the outset of this book that it’s important to critique the things you love in order to make them better. I highly doubt the Bellas are reading this, but if they are, I hope they know that that is what I’ve tried to do here.”

As you can tell I could really go on and on about this book. But I’m sure Harris would not appreciate me spoiling the contents of her book for everyone. What I will say instead is for a book just over 200 pages, Harris gives readers a lot to digest and it’s oh so yummy and satisfying. And I for one want seconds.

The only real criticism I would have for the book is that I wish Harris had conducted more original interviews. As it stands, the book only features excerpts from an interview that she did with Lynch in 2019. But even with saying that, Harris has still done her due diligence with the ample sources she has sought out and cited including books, podcasts, television shows and articles.

In addition to the chapters I’ve already mentioned, Harris also analyzes WWE’s “sideshow” treatment of wrestling weddings; the hypocrisy of Stephanie McMahon’s role in the women’s evolution; the taboos/aversions that continue to surround intergender wrestling; the integral role that appearance (gear, hair, makeup and body type) plays in storytelling and the overall career of a female wrestler and so much more!

Harris concludes her book with an epilogue entitled, “We Still Need a Revolution.” In addition to questioning “the absence of an Evolution 2 and Mae Young Classic 3,” Harris points out what a REAL women’s revolution in the WWE would look like to her.

“Though the women’s wrestling evolution of WWE began in response to the short match (a tag team match with Paige and Emma versus the Bella Twins in 2015) discussed in the prologue, the measure of its success should not just be quantity, but quality,” declared Harris in the book’s epilogue. “High-quality matches and storylines that showcase the plentiful skills of WWE’s women wrestlers and get fans invested. More opportunities inside and outside the ring for women wrestlers who aren’t White, blonde, straight, cisgender, slim, conventionally attractive and able-bodied. Quotas in place to insure equal representation and remuneration. And, finally, recognition that the women’s wrestling evolution is far from complete, and a commitment to seeing it reach the next stage.”

Harris concluded in the same chapter, “The women’s wrestling evolution is not over because WWE says it is. As long as wrestling is a male-dominated industry in a patriarchal society, there will always be room for evolution. From bra and panties to the pinnacle of the industry; the green room to the main event; a Diva to a wrestler. And that will be truly revolutionary.”

Simply put, Harris’ book was such an enjoyable and intellectual read/experience. I laughed. I learned. I agreed. I pondered. I questioned.   Harris has voiced several of my own frustrations as both a women’s pro wrestling fan and a pro wrestling fan in general. There needs to be more books like this and thankfully us fans of pro wrestling books are finally getting them!

Bonus video interview: Jamie Hemmings talks with Scarlett Harris about releasing her first book, the struggles of being a women’s wrestling fan, #speakingout and what a real women’s revolution in the WWE would look like.