Due his popularity the past few years, it was only a matter of time before the WWE released a Daniel Bryan book. In YES! My Improvable Journey to the Main Event of WrestleMania, Bryan, along with writer Craig Tello, takes the reader through Daniel’s start in the business, and continues through him headlining in the main event of the biggest card of the year. 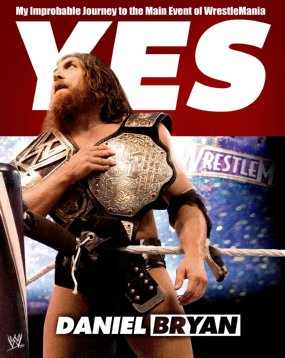 Tello sets up each chapter detailing Bryan’s week going into WrestleMania 30, from Bryan going to the supermarket, to the media events throughout the week, and the Hall of Fame ceremony the night before WrestleMania. After Tello’s introductions, Bryan’s voice takes over in the book.

The book (St. Martin’s Press, available July 21, 2015) details the early years of Bryan Danielson’s (Bryan’s real name) love for wrestling when a classmate brought wrestling magazines over to his house and was amazed by them. The magazines also helped him with his reading skills during his school years. His love continued when his friends would play with the LJN WWF action figures and creating their own wrestling ring in his parent’s living room, where he and his friends would become their own wrestling characters.

The book takes the reader through his early journey of working part-time jobs to pay to attend wrestling school, only to have it close before he ended up attending. He eventually ended up at WWE Superstar Shawn Michaels’ wrestling school, where Michaels gave him the nickname “The American Dragon,” because Bryan’s wrestling reminded Michaels of the Japanese style.Bryan’s book takes the reader on a trip throughout countless independent leagues, where he gained his popularity, including a unique story where former AWA Champion Nick Bockwinkel encouraged the booker to make Bryan “go over” and win the main event because he saw a talent in Bryan.

From wrestling in England to Ring of Honor, there are great stories that Bryan discusses in the book, including getting signed to the WWE after a few failed developmental deals, where in 2008, there was discussions of bringing Bryan in to turn on Michaels and join Chris Jericho and Lance Cade in Jericho’s feud with Michaels. Bryan also tells tales of wrestling throughout the Independent scene being in the ring with future stars Samoa Joe, Austin Aries, Seth Rollins, and the first time he wrestled the future Dean Ambrose.

Bryan discusses his time on the NXT reality show, where he was treated like “a rookie,” and felt the contestants were treated like “fools” instead of trying to become popular with the viewers.He talks about meeting his future wife, Brie Bella, and how the Total Divas reality show affects their personal time, as well as his tag team with Kane, which Bryan speaks fondly throughout the chapter, including “ribs” on Kane with the song “Downtown.”

WrestleMania Day is disappointing because Bryan does not discuss much about his day leading to the match, saying that he thought the WWE Network and website “covered it”. If the reader didn’t follow that on the Network, they are left out of what was in his head (it is part of the title of the book taking us to the main event). This lets the reader down instead of building to a climatic finish.

Overall the book is a good read, especially the first half, with his journey throughout the independent leagues. Once Bryan gets to the WWE roster full-time, there is not much information that is new to the reader, because the book describes the television storylines, and not much of Bryan’s thoughts of most of the events (which is a typical theme in WWE-owned books). Running over 300 pages in length, there is still something readers will find enjoyable in the book, although the second half started to lose this reader’s attention due to lack of insight.