Like a lot of things, Buddy Landel was able to chuckle about his abrupt run with the World Wrestling Federation in 1996. In retrospect, debuting the same day as Steve Austin probably should have been the major factor, but in fact it was injury and ego that derailed his attempt for a big run.

It came together because Jim Cornette was shutting down Smokey Mountain Wrestling and was going to the WWF.

Landel, who died today at age 53, recalled the conversation in 2006:

“By the way, you and me are going to New York,” countered Cornette.

Never one to shy away from his past, Landel told the story of his brief stay with ease and great candor.

“When Smokey Mountain closed down in December of ’95, Steve Austin and I started on the same day, December the 5th, ’95, we started the same day, him as The Ringmaster, me as ‘Nature Boy’ Buddy Landel,” he said. 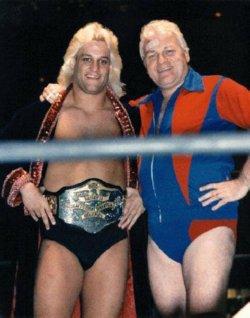 He was pumped for the opportunity.

“I think at that time in my life, I had come back from a lot of negativity in my life, and proved myself in Smokey Mountain. I drew the biggest house they ever had with Shawn Michaels in Knoxville, my home town. I was feeling confident, looking decent, feeling confident. I was ready to get back in it.

There was no signed contract, but there was talk of signing something at the Royal Rumble, in January 1997.

“Let me tell you a quick story how I got over with Vince [McMahon]. I’d never met him. I flew up a day early, and had the suit and tie on, real dark, looking as good as I could look. I went by the booking room, and Shane Douglas, Vince was cussing him out. Me, being the wily veteran that I was, looking for an opportunity to check things out, acclimate myself to what’s going on. [Douglas] was supposed to work with Amhed Johnson that night, and he was saying that he was hurt and couldn’t do it. Well, Bruce Prichard [of the WWF’s creative team] had walked out of the office, and I said, ‘Hey Bruce, I hear there’s a problem in there. If you need someone to put Amhed over tonight, tell Vince I’m your man.’ He kind of looked at me funny, because nobody ever offered to do jobs. So he went back and told Vince. Vince came back and said, ‘You’ll do that?’ I said, ‘Hey, I’ll put him over right in the middle of the ring in 10 seconds.’ So I went out there and did the thing with Tony, Amhed. Right after that, J.J. [Dillon, head of talent relations] and Vince met me at the curtain and said, ‘Thank you for doing that. You’re going over Bob Holly tomorrow night on Monday Night Raw.’ That’s what caused the hell between me and Holly.”

It was on a separate occasion that he shared the Holly story.

“Bob Holly was funny, they put me up with Bob Holly, and Holly walked up to me in front of [agent Jerry] Brisco, and said, ‘I don’t want to put him over. It’s nothing against you, Buddy.’ ‘Hey, no problem, brother.’ But they made him do it. We got in the ring, and he tried to get cute with me. If you watch the tape, you’ll see that I actually had to take him down and put him in a sugar hold to calm him down. I beat him anyway. On the way back from the ring after that, Bob Backlund had refused to put Bret Hart over, the champion. [Jerry] Brisco asked me if I would go out there and put him over real quick. I said, ‘Yeah, under one condition.’ They all sort of jumped back a bit. They said, ‘What?’ I said, ‘He’s got to pin me right in the middle of the ring.’ After that match with Bret Hart, Chris Candido, Tom Prichard, Tammy [“Sunny” Sytch] and I were coming back in a snowstorm. I slipped and ripped my patella, a quad injury, that put me out about six months.”

To Landel, the wrestling business was just that, a business, and everyone was in it together.

“I learned that from Bill Watts: Find your place and be part of the team. There’s no teamwork anymore, it’s all about me and I.”

He did go back to WWF later for just a couple of TV matches, but then that was it.

“It was just one of those things were success eluded me again as far as wrestling was concerned.”