Cora Combs, who died June 21, 2015, at age 92, allowed her evil side to come to the forefront when she donned an outfit and wrestled as Lady Satan. Usually, her opponent was quite familiar to her — her daughter Debbie Combs.

And that made it tough.

In an interview in 2006, Cora told this writer that it was her idea “to wrestle mean,” but it was a challenge wrestling her daughter: “Yeah, it was hard, because I didn’t want to hurt her.” 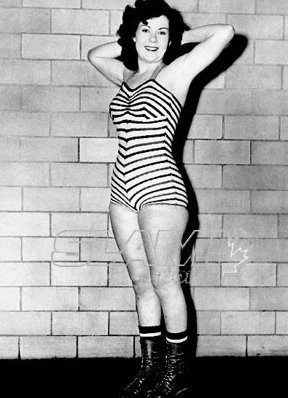 The story of Cora Combs is full of colourful stories like that. Settle in to learn a few of them.

Born Cora Svonsteckik on March 17, 1923, and raised in Hazzard, Kentucky, which was coal mining country, Cora said that she enjoyed basketball and track and field as a youngster, but it was music that first had a hold on her. “I’ve always loved music. I did music before I wrestled. I played the bass fiddle.”

In Nashville, she joined a country western group, the Trail Riders. While the group didn’t become well-known, years later, while living in Music City, she was still involved in country music. Chances are if you are a fan of the country twang, you might have seen her in a music video or two, or even an occasional movie filmed around town.

The first was “Ten Feet Tall and Bulletproof,” by Travis Tritt. There were others, including videos by Trisha Yearwood, Dolly Parton, Confederate Railroad and Mark Chestnutt.

“I’d pretend to be somebody and they’d be singing,” was how Combs described her roles.

It meant that Cora Combs was still recognized; “Good that they still remember me. I still get fan letters.”

In some ways, her life in wrestling was like a movie script.

Nashville’s Hippodrome was home to professional wrestling, and the promoter was Nick Gulas. It was Cora’s sister who deserves credit for the lifestyle change.

“My sister went all the time and I never went. So I went with her and I fell in love with it right away,” Cora said. On the card in late 1949 was Women’s World Champion Mildred Burke and Dot Dotson. 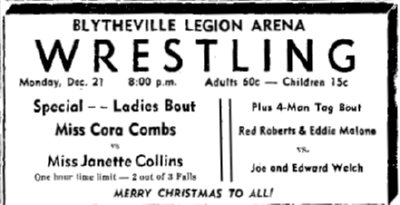 “I’ll never forget,” said Combs. “I wanted to do it. I challenge everything anyhow. I don’t no more! I’m too old to do it anymore!”

“I went and talked to him, and he told me to come to Columbus, Ohio, and they trained me.”

Training to be a pro wrestler was different than being a musician. “It was rough. I wasn’t used to all that.” Cora figures she trained for about six weeks before her debut, a seven-girl battle royal in Jacksonville, Mississippi in early 1950. “I got the stuff beat out of me.” The Combs last name came courtesy of Billy Wolfe.

That was one of the few things that Wolfe gave instead of taking.

Wolfe made her calendar. “He did all the bookings, and we paid him 50% of our earnings. Back then, money wasn’t worth as much as it is now. We’d give him 50% and he’d do everything, arrange everything for us. We didn’t have to do nothing. And what a man he was. A lot of people don’t like him, but boy, he did his girls good … If we got hurt and couldn’t wrestle, he’d pay us anyhow. He was a good man.”

According to Combs, Wolfe paid for the hotels, but the wrestlers paid for the food. “Sometimes he’d take us out to dinner, if he was on the trip with us, he would.”

The biggest help on the road, while learning the art of wrestling, was June Byers. “She’s the one that took charge of me,” said Combs. “She was lovely. She was strict on me, you know, and everything like that. She was a good person.”

Another big help was Mildred Burke, who later broke off from Wolfe and started her own promotion, World Women’s Wrestling Association, which included Combs. “She was wonderful. She was the mother of all the wrestlers. She was a good wrestler. She wrestled babyface, never heeled, never heeled. I went on the road with her.” 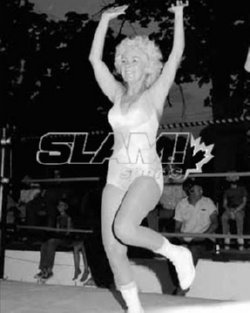 “She just told me how to act, how to get in the ring and listen to the people. They call you every kind of names that there were. She said just don’t get mad because they had paid their money to see you, so you’ve got to get up there and perform. She told me that. She told me a lot. We talked a lot. But when I wrestled her, it was different. I babyfaced when I wrestled with her. We both shook hands when we got through.”

For the most part, the red-headed Combs was a babyface, but she said she enjoyed being a heel later in her career.

The life of a wrestler, moving place to place, was tough.

“It’s very lonely on the road. Back then, you couldn’t go to a bar by yourself or they’d think you were trying to pick up somebody. What I did, or what most all of us did, we’d just go back to the hotel and stayed because we had to wrestle the next day. We traveled in the cars. We flew some, not very much. But I loved it … You had to love it to put up with all the bruises and bang-ups you get in the ring. You had to really love it.” 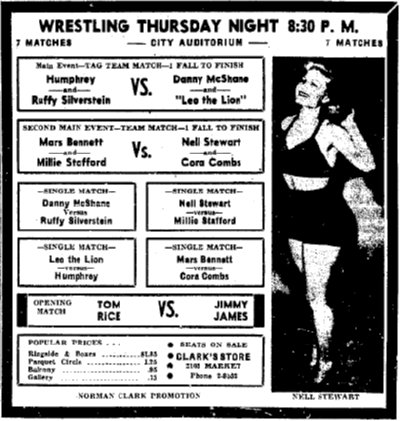 While wrestling, Combs broke her collarbone, and dislocated a shoulder. Then there was the cauliflower ear, her left one, “from people getting a side headlock on me.”

“It proves that you were a good wrestler if you get cauliflower ears!”

In 1954, Combs was married, and took the last name Szostecki, who was in the military. They’d met in Nashville, but he wasn’t a wrestling fan. “I made him one!” cracked Cora. “He had to be good to put up with me for 51 years.”

They had two children, Charles and Debbie.

It was Debbie that became a pro wrestler. 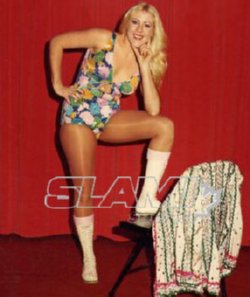 Debbie Combs debuted when she was 17 years old. “She went with me, and one of the girls didn’t show up and we put her in the ring,” chuckled her mother. “She lasted five minutes and she fell in love with it like I did.”

Mom said her daughter was a quick study; “She’d been around it all her life. She watched the matches and wanted to do it. When she was little, she’d dress up like wrestlers.”

They teamed together the one time in St. Louis. Roger Dean’s St. Louis Wrestling Fan Club described the bout, which aired November 24-25, 1979: “St. Louis’ first mother-daughter tag team of Cora and Debbie Combs took two of three falls from Kay Roberts and Sherrie Lynn. Debbie won the opener from Roberts, Lynn the second from Debbie, and Cora beat Lynn for the win.”

However, the mean Lady Satan beating up the beautiful Debbie Combs makes for a memorable storyline. 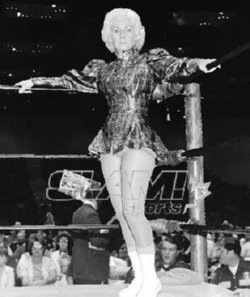 Writer and ring announcer Jerry Wiseman once shared a story of seeing them in the ring in Lima, Ohio. “Cora worked Debbie early on in the show and came out in all black as Lady Satan, she had to be almost 70 I think… she got heat just walking to the ring, didn’t have to say anything but wave her hand in dismissal and growl. Debbie and Cora worked probably a ten minute match, most of it was matwork but Cora still took a couple of bumps for Debbie,” wrote Wiseman. “They worked again later in the show in a mixed tag match and she got just as much heat then as when she first walked out to the ring.”

Wrestling took Combs over the United States, as well as Canada, Mexico, Japan, Cuba (pre-Castro), the Fiji Islands, and Nigeria. There aren’t many names that Combs didn’t encounter through her 30 years in the business.

“She was the first person that I ever went on the road with, and I loved her. The first person to ever pluck my eyebrows,” recalled Ethel Brown, one of the few contemporaries of Combs’ still around.

Natasha the Hatchet Lady, who wrestled in the 1970s, ran into Combs too: “She is another rough, tough pistol. She’s from Tennessee, she’s an old hill billy. She believes in just stomping and swinging those fists and she’s good at it.”

In this writer’s files are thoughts on Combs from a few names no longer around.

“Cora was a great, great girl,” said Mae Young, who kept in touch. “Cora is a wonderful woman. I’ve known Cora ever since I wrestled.”

Sara Lee described her hard fought battles with Cora Combs: “Me and Cora worked hard together. We knocked the fool out of one another. Many times me and her both left the ring with blood coming out of our nose. We gave the people what they wanted.” 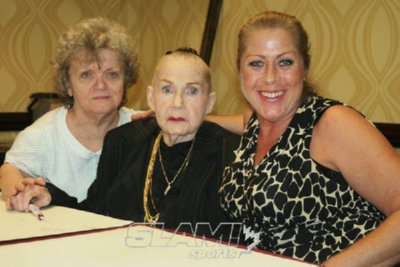 There were a few titles and another alias through the years as well.

In 1976, working for Buddy Lee’s UWA, Cora Combs worked as the Bicentennial Queen, a role later taken over by Mary Jane Mull.

Combs held the United States Women’s Wrestling Championship (one of many that existed). In May 1966, she was out in California, and the Modesto Bee described her: “Cora, a veteran of ring wars who is presently the United States champion, is a pleasant looking red head who would look right at home shopping in a supermarket.”

In the biography for her induction into the Pro Wrestling Hall of Fame in 2007, historian Tom Burke addressed a major historical moment that Combs was a part of: “Her most famous match was on March 3, 1972 in New York City. She and Princess Ti Ti (Chi Chi Paris aka the Black Dragon) were the first professional female wrestlers to have a match in New York State. The match was covered by major television and radio stations and also several print media outlets throughout the city. After breaking the fifty-year ban on women’s wrestling in the Empire State, Combs continued to wrestle and signed with a new wrestling promotion based out of Cleveland called the International Wrestling Association (IWA), which was operated by Pedro Martinez and Eddie Einhorn.”

In 1985, Cora Combs was done with pro wrestling, but stayed in the spotlight through her acting.

She was a regular at Nashville-area reunions, including Scott Teal’s Tennessee Legends celebrations at his home.

According to sources, Cora had been suffering from pneumonia in the last week, and died early on Sunday, June 21, 2015, in Nashville.