The first time Olympic gold medalist Kurt Angle met Lou Thesz, a six-time world champion, was an indescribable moment. A moment not between professional wrestlers, but two amateurs who rose through the ranks and formed an immediate mutual respect.

Charlie Thesz, Lou’s wife, said the first — “and probably the only time” — Angle and Lou met was exciting to watch.

“I’m sure you’ve seen it. It’s that one wrestler recognizing another, and I’m talking in the amateur sense, not professional,” Charlie Thesz said.

After Lou’s death in 2002, Charlie Thesz found some notes about Angle from Lou’s autobiography and mailed them to Angle. Lou wrote that Angle “filled the gap” between the two athletes.

“It was in Lou’s own hand and it was just — it wasn’t directed to Kurt, but it was about Kurt…

“Lou was, of course, incredibly impressed (with him),” Charlie Thesz said, “but that’s what (amateur) wrestling’s all about. You don’t have to be 300 pounds. Each person competes on their own level. It’s just an amazing sport.”

Those notes are now framed in Angle’s office.

“It meant the world to me,” said Angle, who will attend July’s festivities for the Geroge Tragos/Lou Thesz Professional Wrestling Hall of Fame in Waterloo, Iowa. Angle, a former TNA World Heavyweight Champion, was inducted into the Hall of Fame in 2013, but was unable to attend.

Already honored by the TNA Hall of Fame, National Amateur Wrestling Hall of Fame, and Cauliflower Alley Club, Angle said what makes the Tragos/Thesz Hall of Fame stand out is “the sole fact” that it combines the professional and amateur ranks. 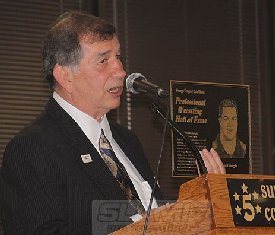 “I think, with anything, it brings back history, to know where wrestling started … how it influences the way it is today,” said Angle, who “never thought it would be possible” to see a hall of fame melding those two worlds together.

“It’s hard because when Thesz and Tragos were in (professional wrestling), it was more of a shoot style and it’s a lot different today,” Angle said.

While the psychology is the same, he said today’s incarnation of the sport is more so about acrobatics.

“They’re complete opposites in many ways,” Angle said. “From a creative standpoint to having charisma in pro wrestling, and in amateur wrestling (you’re) showing no emotion at all.”

Adjusting to telling a story in the ring instead of going straight for the pin was another challenge the current TNA star faced.

“It was hard to adapt, and to bring them together, I think, is incredible,” Angle said. “The only thing identical about them is the name ‘wrestling.'”

Charlie Thesz said Angle has not yet seen the museum, which she believes is “probably the proudest accomplishment for Lou.”

“He was just so thrilled to be associated with this museum because it’s about wrestling — not about pro wrestling — it’s about professional and amateur wrestling, and it has a completely different tone,” Charlie Thesz said.

To be recognized as one of the best wrestlers through the Tragos/Thesz Hall of Fame is “quite an honor,” according to Angle.

“You look at the hookers like George Tragos and Lou Thesz, what they did for professional wrestling and obviously Dan Gable,” Angle said.

Gable, whose namesake dons the museum affiliated with the hall of fame, is, “by far, the best, most popular coach and wrestler of all time,” according to Angle. “Dan Gable has always been the guy that I wanted to be like since I was a little kid.”

Gable has been “the name and face of amateur wrestling for so long” and deserves the accolades, according to Angle, who Gable helped train to a 1995 world championship victory.

“I went out there to train for a month and I had a whole new insight on how to train. It was borderline abuse,” Angle said. “I talked about it in my book… what he did and how hard he trained his boys, but when you talk about Dan Gable, you understand that he was able to transform average wrestlers into national champions.”

Gable said he recalled Angle having an effect on him as well. The 1972 Olympic gold medalist ran a couple sessions in Florida during the ’90s, which involved the former WWE champion.

“I just put them through one of my normal type of practices,” Gable said, “and his reaction to that practice was one that made me kind of realize that I ran a lot of practices above and beyond what most people did just because he was already a champion… and here he was saying, ‘Wow, that was a very tough practice.'”

Gable said while Angle’s career has veered in two directions, he has been “at the height of his profession” in both realms.

In his transition from the amateur ranks to the pros, Angle said he “had to forget everything” he learned — most notably his instincts.

“I said, ‘This is crazy, I have to let a guy beat me up half the time.’… Nobody ever took me down or threw me around (in amateur wrestling) … and now I have to let (them) and I have to help them?” Angle said. “It was really hard to turn off that instinct.”

He also had to work to ease up in his movements.

“I have to be lighter and not press somebody in a headlock so damn tight,” Angle said. “Everything was the complete opposite … I became what I call a follower.”

And by following and learning from WWE ring leaders such as The Undertaker and Eddie Guerrero, among others, he said he became “a great leader” in a year and a half. 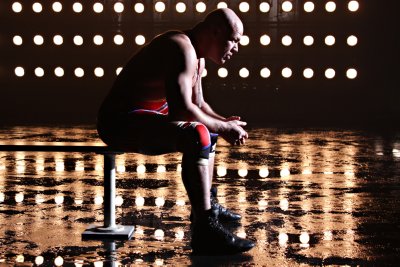 “(Dory) was so adamant about the basics in professional wrestling and that’s all we worked on day after day after day … It was very good, but he also loved to add amateur wrestling,” Angle said.Part of the training that helped bring his two worlds together came from Dory Funk Jr., who Angle said was “an incredible coach,” along with Tom Prichard. Funk taught Angle how to work a body part and bump properly, which consisted of bumping “at least 300 times a day,” according to Angle.

While Angle earned his start with WWE in the late 1990s and rocketed to the main event, he said in a recent Huffington Post interview that his career has been better with TNA. He told SLAM! Wrestling that while he “was very blessed” during his WWE tenure, he felt like he held more of a veteran status in TNA.

“To be able to pick up (professional wrestling) that quickly and have these achievements I did in a six-and-half year period (in WWE) — and I had guys like Triple H and Stone Cold [Steve Austin] say to this day nobody’s ever done that and nobody ever will. That’s a huge honour from guys like them,” said Angle, who believes he was “just starting” to hit his peak at the time, despite some fans viewing him as the best in the world.

From A.J. Styles to Bobby Roode and beyond, Angle said he has had “some amazing matches” with the talent in TNA.

“(I’ve) had a better career (in TNA) even though it’s hard for me to say it, because I had a really incredible career in WWE,” he said.

The Tragos/Thesz Hall of Fame weekend will be held July 9-11. A special recognition ceremony for Angle will be held at 4 p.m. on Friday, July 10 (and he is unable to be there at Saturday’s induction for Greg “The Great Wojo” Wojciechowski and Jim Londos). All-access pass holders and banquet ticket holders can attend the ceremony. For more information or to purchase tickets, visit this link.