Once again, it seems that the choice of recipient for the Jim Melby historian award at the National Wrestling Hall of Fame in Waterloo, Iowa, has caused some controversy. As Jim’s only child, I would like to address this issue from my perspective based on the Dad I knew. 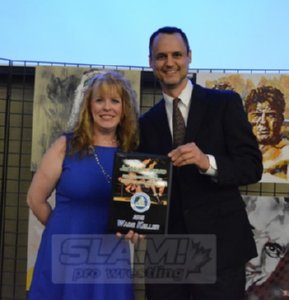 I was asked point blank what my father thought of some of the wrestling reporters who approached the business from a perspective that would seemingly be opposite from his type of journalism. My only response is to honestly say that I never heard him speak a negative word about any other wrestling reporter.

Realistically, a great majority of my father’s wrestling writing career occurred during the “Kayfabe era” and my father was, in essence, a company man with great loyalty to the men in charge of the AWA territory. Dad’s job as a writer was to promote the sport for the fans. In doing this, he put over the faces and tried to garner heat for the heels. His job was never about reporting on the behind-the-scenes operations of business. Though he didn’t write in a “tell all” style, it can be logically argued that his early writing was somewhat sensationalist.

In his later years, Dad turned to compiling career histories and arena results. One of his greatest accomplishments was to write Gopherland Grappling, the purpose of which was to provide documentation of the development of professional wrestling in Minnesota, because at heart, my father was a life-long wrestling fan.

This brings me to Wade Keller and the Pro Wrestling Torch newsletter and website (pwtorch.com), and why I support the Hall of Fame’s decision to honour him as this year’s historian.

Like my father, Wade was drawn to professional wrestling as a fan at a very young age. And just like Dad, he had a passion for documenting the information he received. As a child, even I was recruited to keep track of results from the televised shows in a notebook. I’m fairly certain that Wade and I could compare notebooks and find the same information. Wade also exhibited a need for accuracy in his reporting. Though I doubt Dad ever called the wrestling offices to find out a wrestler’s exact height, he did contact people around the world to obtain and verify the dates and results of wrestling cards from before his time.

I had not met Wade Keller until this weekend in Waterloo, but after speaking to him and getting to know his passion for wrestling and writing about wrestling, I have no doubt that my father would be pleased that Wade was this year’s recipient.

One of the first things that Wade told me was that he was disappointed that he wasn’t able to locate the letter he received from my dad when he was a teenager, just embarking on his wrestling writing career. To this day, Wade seems surprised that people like my Dad, Mick Karch and George Schire would take the time to give him a hand in getting into the business. I, on the other hand, am not surprised at all. My father’s career started at the age of 15 and he had many people in the business help him along the way, so it seems only fitting that he would do the same in turn. That is the kind of man my father was.

Whether people like or dislike what Wade has written in the Torch (or others in the newsletter, like Mark Madden or Bruce Mitchell), his career as a wrestling writer has flourished for 28 years. He has spent almost three decades contributing to the canon of wrestling literature. That fact alone is significant enough to make him a contender for an historian award. The fact that I see in Wade’s history many of the same things I know to be true of my father’s history is simply a bonus.

Finally, though I am not a part of the nomination or selection committees, I have faith in the people who do make these decisions. During his lifetime, my father was actively involved in the Hall of Fame, and he was a member of the decision making committees. The people who comprise the committees were my father’s contemporaries and friends; they knew his thoughts and opinions. I trust and respect their judgement and will stand by the decisions they make as the representative of the Melby name.