Usually, if you poke a monster like Rhino, you get beaten up. But sometimes, the poker is just trying to figure out whether the “Man Beast” is real or not.

The blame falls on video games.

Now 20 years into his pro wrestling career, the “Being Poked” story is just one of many in the arsenal of Terry “Rhino” Gerin. 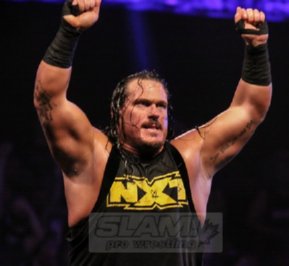 Rhino at the NXT TakeOver: Unstoppable show in May 2015. Photo by Bill Otten, B&B Productions.

“A buddy of mine, years ago, his son kept on poking me because he didn’t know I was real; he just thought I was just this video game, because he played the video game but he didn’t watch the wrestling,” Rhino chuckled. This youngster, probably around seven years old, played video games with his older brother. “Hanging out afterwards, I’m still in my gear, right? I’m leaning back and talking to them because I was up last, and he’s just poking me. His dad’s like, ‘Stop it. Don’t do it.’ He’s just poking me, I remember, in my side. I’m thinking, ‘It’s just a show, kid, not a big deal.’ He’s like, ‘He don’t think you’re real.'”

Anyone who has been in the ring with Rhino knows that he is very much real, and that’s by design.

“The cool thing about having a career like mine….is guys that started watching me when they were in their early teens, mid-teens, or late teens, they’re mothers or fathers — because there are a lot of women wrestling fans — and they have children that are starting to watch wrestling. It’s nice when they come up to you, and they talk to you, and they’re like, ‘Oh, this is my son.’ And they look at the son, ‘See, I told you, I watched him when he was in ECW.’ And now they can watch me wrestle together. That’s a benefit of having a long career. You don’t impact just one generation, you impact two generations.”

One of his upcoming impacts will be at Tommy Dreamer’s House of Hardcore show in Toronto on Saturday, July 18th, the company’s first outside of the United States. The main events have been announced, like Team 3D against The Young Bucks, and Tommy Dreamer versus Chris Hero, but Rhino has an open challenge. “I’m definitely looking forward to beating someone up — in the ring!” Rhino said.

A Detroit native who has wrestled everywhere from ECW to WWE to ROH to TNA, Rhino has a lot of ties to Toronto.

“Toronto, it’s like a second home,” he said. “The wrestling fans are great, they’re intense, they’re passionate. They’re probably some of the most passionate wrestling fans, not only in Canada and the U.S., but the world.”

And that Tommy Dreamer fella? Rhino can crack bones and jokes too.

“It’s kind of love and hate at times — he hates me sometimes and I shower him with love,” he laughed. “He’s a stand-up guy, not only to the wrestlers in the locker room, and as a businessperson, running House of Hardcore. When he worked in the offices of WWE, straightforward, stand-up guy, and that’s the way he is to the fans too. You can see it in his promos and his work.”

Like Dreamer, Rhino is a veteran of the business and is seen as mentor. Recently, WWE has been bringing him in to work with the young stars on the rise in its NXT promotion.

“I’m still full-time in the ring, performing, wrestling. A lot of guys I can help out in the ring,” he said. “I like watching matches when I have the opportunity to, when I’m at shows. I enjoy doing independent shows because I can help the guys out, teach them anywheres from locker room etiquette to things to do, what not to do, what things to work on. I stress getting the basics down and then going from there, because you can’t run before you learn how to walk.” 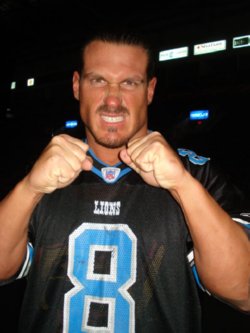 You can take Rhino out of Detroit, but he remains a Lions fan. Photo by Bob Kapur

The mentoring takes him back to the people who helped him.

“When I was coming up, I was able to be in the ring with [Ric] Flair. Dusty Rhodes, God rest his soul, and learn from them — not only in the ring but out of the ring. That’s an education in and of itself, and that’s how you learn the business too. I remember a meeting Vince [McMahon] had with us before, he said, ‘You learn the business when you’re travelling from town to town, because you talked about what worked that night, what didn’t, you talk about wrestling, you talk about different ideas, things you can and can’t do, and things you should try.’ That’s what it is for guys that are coming up that I’m working with, guys on the independent scene, some of the guys in NXT. It’s a treat that I can pass down what I learned.”

While he learned from stars of the past and is helping the next generation, he’s very much aware that many of his peers that he started with, like Edge and Christian, are finished their in-ring careers.

He stressed the in-ring portion of a career, because he said his friends still love the business.

“You’re never done with wrestling, because once it’s in you, it’ll never leave. You can take the person out of the wrestling industry, but you can never take the wrestling industry out of the person. That goes for guys on all different levels,” he said. “You’ll see Edge, he’ll come back and do something here or there, but he’s still talking about wrestling. When I talk to him, it’s just about wrestling. He asks me questions, what I’m doing. He’s very busy with stuff like Haven. I was just visiting with Christian a couple of months ago, and that’s all we talked about, was wrestling. We didn’t talk about the good old days, we talked about who’s getting over now, what looks to be the next star, the big thing, who’s really doing well. So it’s not just reminiscing about our times in Winnipeg or times in WWE. It’s about the present state of wrestling, where it’s going, how it can get there, and stuff like that.” 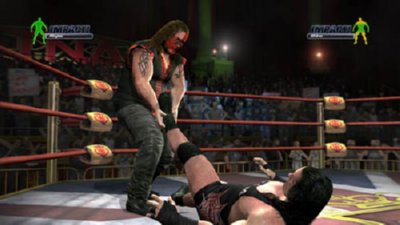 Rhino takes on Abyss in the TNA video game in 2008.

One modern change that Rhino isn’t really adept at is social media.

“I’m not good at tweeting. I just retweet, because I don’t know what to say,” he admitted. “I’m terrible at it, but it’s important because a lot of fans enjoy it. Promoters can get a hold of me through Facebook. It’s hard, because you really can’t have conversations with fans because your day is so busy. I have to do my own bookings, my own this, my own that, so I’m doing more of the work for less money, but I do it because I love it.”

One of those destinations for the Rhino-mobile is Winter Park, Florida, home to NXT and the WWE Performance Center. It’s a long way from the gyms of Detroit and Toronto.

“It’s a great place to go and fine tune and hone your skills, and you have access to top-notch trainers,” he said. “They have a full staff there, so if something’s bothering you, you can get it looked at right there. They have great coaches, great trainers. It’s a great place to take that next step. It’s a heck of a place. I would never have thought they’d have something like that.”

There is something the Performance Center doesn’t have, though, and it’s a suggestion he’s going to take to the top — the veterans would love it.

“They don’t have massage therapy — I wish! Thank you for bringing that up! I’m going to recommend that. It’s just the trainers. For your shoulder, back in the day, you’re just like, ‘Arghh,’ put a heating pad, put some ice on it.”

Greg Oliver hasn’t known Rhino (Terry Gerin) quite 20 years, but maybe 16 or so. He also would like to see massage therapy as a part of his daily routine as Producer of SLAM! Wrestling. Greg can be emailed at [email protected], and you can follow him on Twitter @gregmep.