Hopefuls try to get on WWE radar at tryout 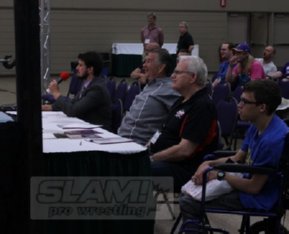 Three or four of the competitors, according to Brisco, “might get a look at,” and though nothing is guaranteed, their name will be on a radar.

Jerry Brisco and JJ Dillon at ringside for the evaluations. Photo by Kari Williams

“These kids really try. They really work hard and they take it seriously. And they want your critique too, and they want you to be honest with them,” Brisco said. “And that’s one thing, we don’t blow smoke up anybody. We make sure that they’re getting the right information.”

Now in its fourth year, Brisco said the talent level has improved with each session.

“Some of these kids I’ve seen for three or four years and they had three years and they take our advice and they work,” Brisco said, “and one kid, I think, hopefully, he’ll probably get a strong look at in Orlando that I saw today.”

Ryan Slade is one of those return customers, this year completing a third evaluation session.

“I’m still chasing my dream, I guess, so if there’s a chance for things to happen, I definitely don’t want to be kicking my ass for not taking the opportunity,” said Slade, who has been wrestling for eight years.

The Iowa native said he was “pretty pleased” with his feedback this year, which offered more one-on-one interaction as opposed to previous years.

“It wasn’t awful feedback, so I’m pretty happy about it, to be honest,” Slade said Friday prior to IPW’s evening show, “and they said they liked the match, so I’m really glad I’m going to be on the main show, so I get the chance to work in front of them again. So, I was really hoping to take what they told me and apply it, so hopefully, they can see at least that I learned things.”

In self-criticism of his bout, Slade said he thought he rushed through the match partly because of nerves.

“I used to have a real problem when I was younger doing it. But I’ve gotten a lot better about it, but I totally felt like I had reverted during that,” Slade said.

That very issue is one Brisco said is common, along with wrestlers trying to “get too much stuff in.” But he doesn’t blame them for doing so when they have just 10 minutes per match.

What he does look for is body language and footwork because he knows the best moves will be incorporated into the bout.

“Sometimes it gets a little funny, too, because the other guy’s trying to get his best moves in too, and they’re not real coordinated out there, but it happens like that,” Brisco said. “But usually the dominant one comes out the way the one that you expect to, but the kids hustle. As long as they give me their effort and their focus, I don’t care what skill level they’re going to get equal treatment.”

Jake Dirden, of St. Louis, Mo., one of the 20 wrestlers who stepped in the ring for Brisco, said this evaluation is one of the few ways wrestlers in the area can get in front of WWE — and one he’s “not walking away (from) with bad feelings at all.”

“You can’t get better feedback from anyone than Jerry Brisco and J.J. Dillon, so no matter who you are or what your opportunity is that comes out of this kind of event, it is amazingly invaluable the kind of feedback that you get,” Dirden said.

While Dirden said he tried to be involved in last year’s session but wasn’t able to get in, he still “got in the car and drove six hours just to shrink (his) world.”

“I was kind of a little on edge (because of not getting into the evaluation), and I got up here, and I listened to all the speeches during the ceremony, and that completely brought me back down and put back to where I need to be in wrestling,” Dirden said, “and, honestly, I feel like this event last year just the ceremonies helped put a much better track toward my future than even if I would have done the evaluation.”

Over the lifetime of the IPW evaluations, Brisco said he’s seen better athletes take to the mat and wrestlers who are studying the WWE product and know what the company looks for in its competitors. This weekend’s lineup included both Division 1 football players and wrestlers.

For those he saw had WWE potential, Brisco will write a report and submit it at WWE, but said it is out of his hands once it leaves him.

Roughly 40 hall of fame attendees and all-access pass holders sat in on the evaluation Friday morning. But in the evening, IPW put on a show for a packed house that featured Wes Brisco defeating AJ Smooth in the Legends Lumberjack Match. JJ Dillon and Baron von Raschke were among the historic figures surrounding the squared circle after meeting fans throughout the night. And with those fans wholeheartedly into the festivities, they were graced with bouts pitting Colt Cabana against Bob Holly with Colt winning, an IPW Vault Championship Match with Marshall Scott (C) defeating Nicky Free, Pretty Ugly teaming with Brian Blair to beat Sparrow, Aaron von Baron and Matty Starr, and the Lou Thesz Cup Memorial Battle Royal – in which Sparrow emerged the victor – among a host of other matches.