‘Two Olympic champions and a jabroni’ 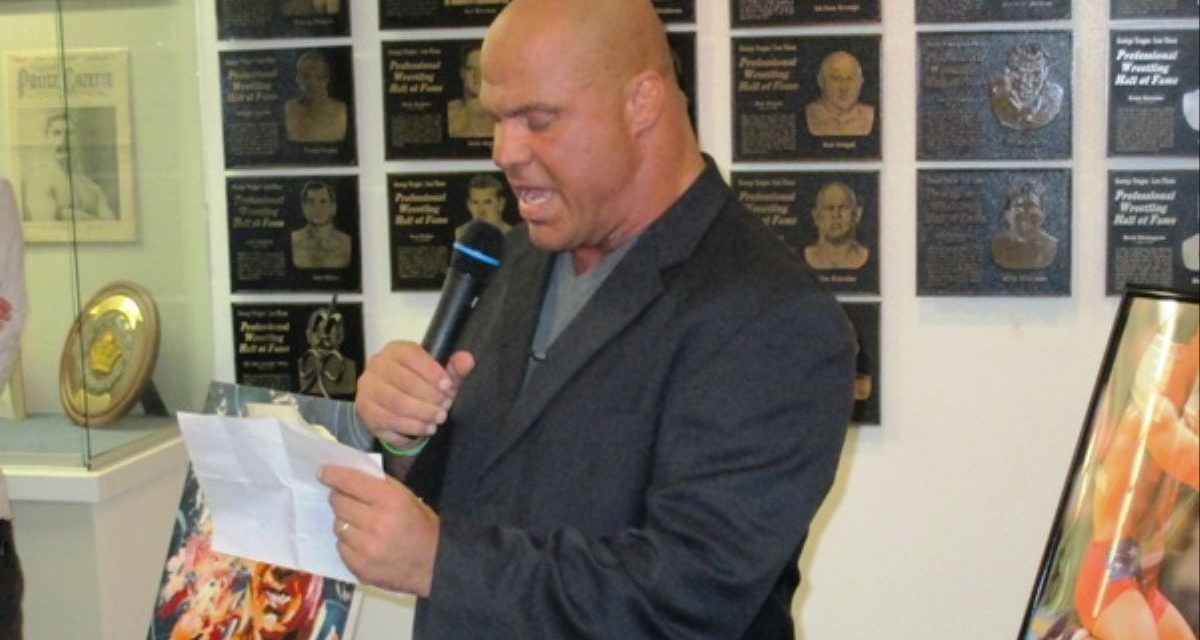 WATERLOO, Iowa – Being honored by the George Tragos/Lou Thesz Pro Wrestling Hall of Fame is “the cap at the end” of Kurt Angle’s career in wrestling.

“I had a great career in WWE. Probably a better career in TNA, I’ve enjoyed my careers. Everything I’ve done, I don’t regret anything. I’ve made a lot of bad decisions, I’ve made a lot of great decisions, but I enjoy my life and I enjoy what I do,” Angle said Friday afternoon to a roomful of hall-of-fame weekend attendees. “And after the Olympics, I had to get a real job, and I got a job in pro wrestling, so I didn’t want to get a real job.”

Upon his journey into the squared circle, Angle said he was unfamiliar with the profession but looked up to athletes like the Briscos and “Dr. Death” Steve Williams, who had amateur backgrounds. 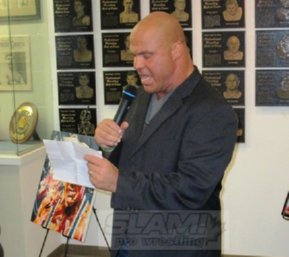 Kurt Angle reads some words Lou Thesz once wrote about him. Photo by Steve Johnson

“I was always told not to watch (pro wrestling), don’t bother with it. Do what you do and go out there and win the gold,” Angle said. “I got involved with pro wrestling and I did some research and I (then I came to) find out how good Lou Thesz was. He was the shooter, he was the hooker. He was the guy with the wrestling moves, the wrestling holds and the submissions … I was able to add Lou’s repertoire into mine.”

But Angle left an almost equal impression on Thesz, who Angle said was interviewed by WWE about two years into Angle’s professional career. Charlie Thesz, Lou’s wife, had sent Angle the transcript after Lou passed away.

“Kurt Angle is the light at the end of the tunnel to perpetuate wrestling. He has the rare full-circle ability to excel at amateur and pro wrestling. Kurt has given his labor of love to perpetuate wrestling, our mutual first love in sports,” Lou wrote. “When we first met, our eye-contact reaction was, ‘My brother, finally.’ Kurt could, in short, revolutionize wrestling — A 700 B.C. miracle.”

Angle said he didn’t know the impact his career had so soon until seeing those words from Lou.

“To have Lou Thesz write this about me is the greatest thing in the world. He was my Dan Gable in pro wrestling,” Angle said.

Coming from a family of six brothers in a wrestling family, the evening conversation centered around Iowa wrestling and its notable coach, Dan Gable.

“Our idol was Dan Gable. He always was. Dan Gable is the greatest wrestler that ever lived,” Angle said. “You’ll get arguments from other schools, other people … (but) Dan Gable was the best ever because he punished his opponents. When he won, he won big. And that’s what my brothers tried to instill in me.”

When it came time to decide where to pursue his collegiate wrestling career, Angle said he “wanted to stay near home,” which factored into his decision to attend Clarion University.

“Clarion was an hour from my house … that was important to me. I don’t know if I would have (gone) to Iowa. As tempting as it would have been, I had a full scholarship offer to the nemesis, Oklahoma State, and I decided not to go because family was important to me,” Angle said. “And I had a great, great career. I loved every part of it.”

Gable said while Clarion is a “very good wrestling institution,” it’s uncommon to see someone reach the stature Angle has.

“It’s unusual that people will be able to go to the level that he has gone and not be in one of the major places,” Gable said. “Even though Pennsylvania’s a great wrestling state, it’s just very unusual.”

Regardless of where Angle wrestled in his college years, the TNA hall of famer did spend “the worst month” of his life training with Gable.

“The easy days were the hardest days I’ve ever been through, and he just showed me another level I needed to get to, and I’m glad I went too,” Angle said. “Would I ever go again? No.”

While Gable pushed Angle to his limits during this month-long stint, it was a one-day training session in 1995 that stood out to Gable.

“I just wanted to test these guys a little bit, so I just did what I normally do. And I what I normally do was a little too much because he wrote about it in a book,” Gable said, eliciting laughter from Angle and the crowd. “And he’s still having trouble recovering.”

Just days before the hall of fame weekend, Angle underwent neck surgery, but Gable said not to feel sorry for him.

“It’s just part of the game, you know, and he’s not feeling sorry for himself either,” Gable said. “I can tell, otherwise he wouldn’t be here. It’s just the nature of this guy.”

Jerry Brisco said it was an honor to stand before the fans at Angle’s reception with Angle and Gable — or, “two Olympic champions and a jabroni” — to honor the former WWE star.

“(Kurt Angle) made the complete circle, and I’m very proud of him, I’m always proud of him when a wrestler, a good wrestler from the collegiate ranks joins us and becomes a star and set a role model,” Brisco said.

Angle also was presented with two championship rings and signed the Mat of Honor in the professional wrestling portion of the Dan Gable Museum.