Tragos/Thesz HOF induction: From Bee to Glamazon to Wojo

WATERLOO, Iowa – From comparisons to Superman to heartfelt appreciation for fans and family members who offered support along their journeys, this year’s George Tragos/Lou Thesz Professional Wrestling Hall of Fame inductees took time to retrace career highlights and express the passion and gratitude they hold for the industries that governed their lives.

Wade Keller, of Pro Wrestling Torch, was commended for his work in professional wrestling journalism. Keller is nearing 28 years writing and publishing the newsletter, which became the culmination of a career he unintentionally started by keeping win-loss records of AWA shows he watched in his youth.

“It has been, absolutely, an amazing journey, and I am always, always thankful for the sacrifices that wrestlers have made to entertain us and provide me something fascinating to write about,” Keller said. “There’s never, ever been a day where I’ve gotten out of bed and gone to my job that I haven’t been excited about what’s in store for me. There’s been some down days, some tragedies and I take that responsibility very seriously and cover those, but to be able to spend as many years as I have … It is something I’m thankful for every day.”

Keller credited Bruce Mitchell, who has written for PWT for nearly 25 years, for helping channel the editorial direction of the newsletter, which Keller said includes “calling out hypocrisy that we believe undermines the business.”

In introducing Lindland, Jim Ross, the evening’s emcee, said the wrestling business always has been “built on toughness” and Lindland epitomizes that characteristic.

“Matt was a tremendous MMA competitor, one of the best in the world, and fought in the UFC for many years … If you follow MMA, you saw Matt Lindland fight and you never saw him back away from interacting,” Ross said. “He’s a badass. But he’s also a great guy.”

Though Lindland is currently the head coach of the United States Greco-Roman Olympic team, he said early career plans weren’t near the mat, but rather out riding horses. Finances and the suggestions of a high school gym coach-led Lindland to wrestling, which through some twists and turns then led him to careers in MMA, UFC and brought him full circle as a wrestling coach.

“I’m blessed to be doing what I love to do,” Lindland said.

The first female recipient of the Frank Gotch Award, Phoenix said it was “intimidating” to receive the call that she was being honored, but Ross’ praise of her cast little doubt on the decision.

“You never wanted to bring poison into the locker room,” said Ross, a former head of talent relations for WWE. “There’s more than just finding bodies and more to just finding looks. You wanted to find charisma and physical and mental toughness because the job description is very challenging. It isn’t for everyone. So you want to bring good leadership quality, solid human beings to your locker room because that spreads. It’s contagious, it’s infectious. And that’s what we got with Beth Phoenix.”

Phoenix brought not only her track record in the professional ranks but her experience at the amateur level to WWE’s Divas division. One constant in both worlds, according to Phoenix, is that you need to have “grit.”

“You need to be the type of person that is willing to do the work, put in the dedication, love your fellow team members and when it’s up to you to be out there to do your best at that point,” Phoenix said.

She also thanked the wrestling family she gained along her journey for bringing to her newly formed family with Adam “Edge” Copeland and their daughter, Lyric.

And while the ex-Glamazon no longer conquers opponents in the ring, she is on a new journey with Headlock on Hunger, an outreach program of Asheville, N.C.,-based Eblen Charities that works to obtain food for children facing hunger in their own household.

Blair, also affiliated with Headlock on Hunger, told the story of how a sermon he heard in Gary, Indiana, during his youth resulted in him praying to become Superman.

“And I prayed that prayer as I’m standing here, for over a year,” Blair said.

Though a childhood friend derided the goal because Superman is on television, outruns locomotives and leaps over buildings in a single bound, Blair realized his prayer was answered.

“Be careful what you pray for because I lived on television,” Blair said. “Although I didn’t have the blue cape or the ‘S’ on my chest, I could hit the ring ropes like a speeding bullet and leapfrog a man with a single bound and get slammed and have a 300-pound man jump on my chest.”

Jerry Brisco listed off Blair’s wrestling accolades, while at the same time commending the ex-Killer Bee’s decision to enter the public realm of politics. Blair has served as a Hillsborough County (Fla.) commissioner.

“(Brian) decided he wanted to make the ultimate sacrifice and put his life out for darts to be thrown at him everyday 24/7 and put his life, his entire life, in the public hand,” Brisco said, “and when you’re in public when you’re running for an office, nothing is sacred. You can’t have any skeletons and this guy didn’t have any.”

Londos and Wojciechowski also were recognized during the evening, with Ross saying Londos “saved the wrestling business” and Wojciechowski speaking to his career and the near misses he faced in attempting to for the gold in the Olympic Games. 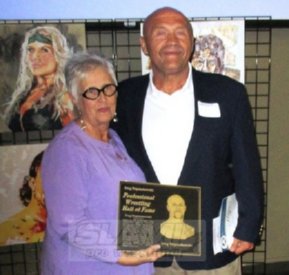 “As I was going through the Lou crap, I found a treasure that I knew had a specific home. And this has been the real joy in my life to distribute pieces of Lou to people who loved him. People who understood what it was all about, understood what life as a wrestler was about,” Charlie said.