“Sensational” Sherri Martel died Friday morning at the age of 49.

Details are still unclear at this point what she died from. She passed away at her mother’s home in Birmingham, Ala.

Born Sherri Russell in Birmingham, Alabama, on February 8, 1958, Martel went to wrestling shows with her mother as a teen. 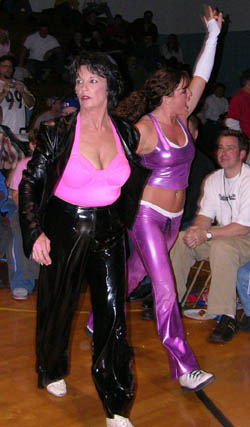 Sherri Martel heads to the ring with Jenny Taylor for a show December 4, 2004 in Lenoir, N.C. Photo by Chris Schramm

Martel talked about her start in wrestling in a 1997 interview on Dennis Coralluzzo’s Wrestling Radio Show. “I started out with a little independent promotion ran by Grizzly Smith and Bill Watts who ran shows in the Mid South. I went to Smith when I was 16 and of course they didn’t take me seriously. So they told me to come back when I was 21. Okay, so I waited went back to school and all that. When I was 20 I got divorced from my second husband and moved to Memphis and I found this little school there and the guy who owned it was Butch Moore. Now I walked in there the first time with my 500 bucks, 20 years old with 500 bucks I want to be a lady wrestler you know. So the first think he does I mean he’s a big guy, bleached blonde hair and eyes that could stare through you. Anyway before he says anything or took my money or asked me anything he got up came around the front desk and slapped the living piss out of me. So I looked at him and said is that all you got?”

Her first ever match was in a cattle auction barn in Hattiesburg, MS. At The Fabulous Moolah’s school, Martel furthered her training with Moolah and Donna Christianello, starting in the fall of 1980.

As a wrestler, her first manager was memorable — it was Jim Cornette in the old Tennessee territory. Within a few days, she was injured in a battle royal and went on the wrestling disabled list. “In two weeks, I managed to set her career back 15 years,” Cornette recounted.

In Memphis, Martel managed Pat Rose and Tom Pritchard, as well as wrestled.

In the American Wrestling Association, Martel won the women’s world title three times in the 1980s and served a stint as manager of the championship tag team of Doug Somers and “Playboy” Buddy Rose. In 1987, Martel moved to the WWF (while still AWA women’s champ) and quickly captured the women’s world championship from Moolah.

“I won the WWF women’s championship on July 24, 1987 in Houston, Texas,” Martel told writer Jimmy Van in 1999. “Being that she was my former teacher, I think she probably gave me one of the worst beatings of my life… which I probably deserved at one time or another ’cause I was always a very disobedient student.” Martel and Moolah extended their rivalry as captains for the first-ever women Survivor Series teams in 1989.

Sherri held the title for 15 months before Rockin’ Robin defeated her in Paris. A bad back eventually sent her to the managing ranks on a full-time basis.

“Women like Sherri and Luna (Vachon) were so inspirational — they set the precedent, so the fact that they were so cool to me really made me believe that I could make it in wrestling,” Lita wrote in her autobiography.

As a manager, the wild-eyed Martel took charge of Randy Savage, and played a key role in the feud between Savage and Hulk Hogan. She even got her hair cut at SummerSlam 1989 when Miss Elizabeth knocked her out with a purse following a main event tag match.

Compared to staid managers like Mr. Fuji, Martel was a wildcat as a manager, screaming, running around and using her purse or shoe as a weapon.

In 1994, she talked about her desire to perform on the FM Light Show radio program opn WBAI. “You know people, if you don’t go out and give them everything that you got, they’re going to see it, and that’s not what they pay their hard-earned money to do. They didn’t come to see a failure out there.”

Martel also became recognized in the WWF as manager of Shawn Michaels, who, in a previous wrestling life, was the leading challenger to the AWA’s Somers and Rose. That role ended when Michaels accidentally smashed her with a mirror during a set-to with Marty Jannetty, leaving glass in Martel’s eye.

“Sherri was an awesome lady to work with,” Michaels wrote in his autobiography. “She was very excited to work with me and said she would do whatever I wanted.”

At various times, she was known as Queen Sherri (with the “Macho King” Randy Savage), Sensational Sherri, and Sensuous Sherri.

After her WWF departure, Martel was a regular on the AAA promotion in Mexico, worked briefly in ECW and for Cornette’s Smoky Mountain Wrestling.

In WCW, Martel managed Harlem Heat as Sister Sherri, a white woman with two African-American wrestlers in a role that announcer Gary Michael Cappetta said created “easy heat.” But Martel didn’t care about that. “We didn’t see color and I don’t think anyone in the wrestling business sees color because we’re brothers and sisters and family,” she said. 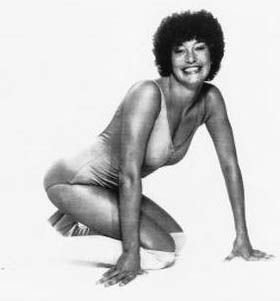 During a Wrestle Radio U.S.A. radio program in 1994, Martel was asked about whether she preferred being a manager/valet or wrestler. “”Well, when I was wrestling at a particular time, then it was wrestling. When I started managing, the thing that scared me was that I didn’t know how to talk on TV. And you know yourself when that red light goes on, there’s no turning back. It’s true that you can do the interviews over, but you just have to get comfortable with the storyline.”

In September 2006, Martel made an appearance in TNA, scouting Bobby Roode. Earlier in the year, she was inducted into the WWE Hall of Fame by her former charge Ted DiBiase. Martel stole the show. Her speech upon her induction was regarded as one of the most heartfelt, animated and even brassy acceptance speeches in recent years. Even as she professed her love of the sport and its people, Martel snapped into character to shout down a heckler: “That’s it, the nice girl stops here — I worked 26 years for this, so sit down and be quiet!”

Booker T was asked about Martel’s speech at the Hall of Fame by the Silvervision website in Britain. “Yep, that’s just Sherri right there. She’s wild, we had a lot of fun times on the road. Sherri is one of a kind, there’ll never be another one like her.”

A resident of Jacksonville, Fla., Martel leaves behind a son. Funeral arrangements are unknown at this time.