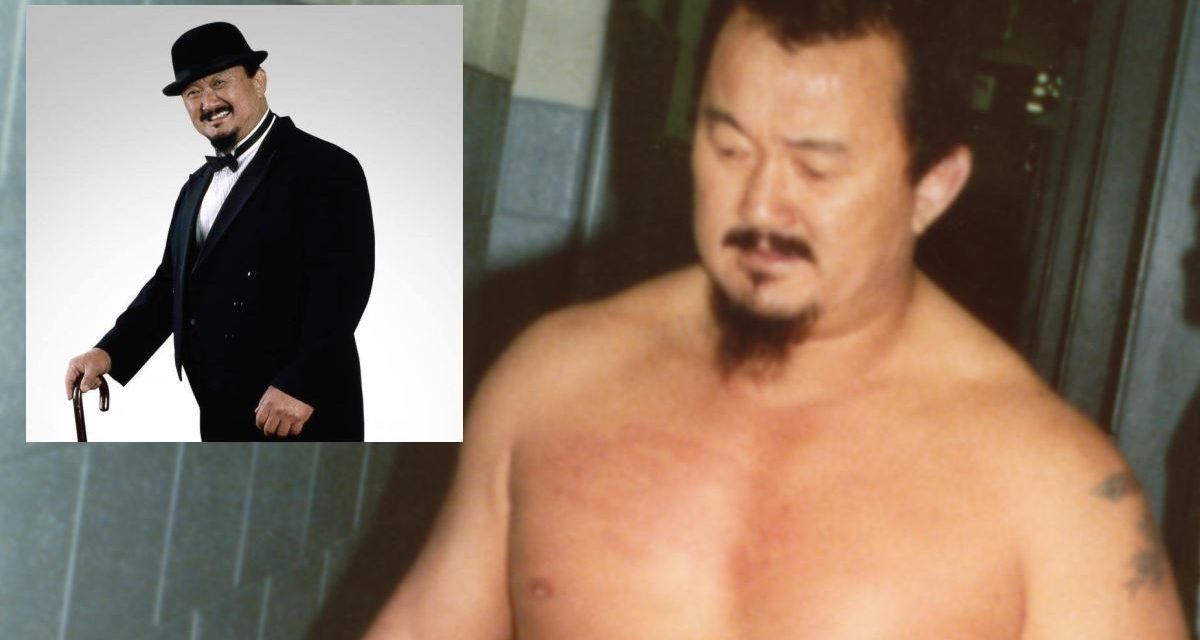 WWE is reporting that Mr. Fuji — Harry Fujiwara — has died. He was 82 years of age, and had been in poor health for a number of years.

While many remember Mr. Fuji as the devious manager of the likes of Demolition and Magnificent Muraco, he had a storied wrestling career well before becoming a manager.

As for his colleagues, they remember his ribs.

No one was safe from Fuji.

“Fuji’s were nonstop: in the arena, in hotels, in airports, in restaurants. And Fuji was an instigator. He’d find weak-minded wrestlers and have them do ribs for him, just to wreak more havoc. The man was incorrigible,” wrote Classy Freddie Blassie in his autobiography, Listen, You Pencil Neck Geeks. “If you were sitting across from Fuji, drinking a cup of coffee, he was liable to slip in some laxatives when you weren’t looking. It would be time to go to the ring, and you’d be on the toilet, shitting your guts out. If he heard you on the phone, making airplane reservations, he’d call up the airline after you hung up, and cancel your trip. You’d miss a booking, lose money, and Fuji would think it was funny.”

There was the occasional payback, though, said Larry Zbyszko. “We used to put him in some sort of leg hold, because they didn’t wear shoes with that gimmick, and we’d grab his ankle and tickle his feet and he’d go apeshit,” recalled Zbyszko, a frequent foe, with a chuckle.

Jules Strongbow said he did the same thing as revenge against Fuji.

“Fuji tried to get silly in the ring with me one night. I let him get away with it because I figured somewhere down the line, I’m going to find out something about Fuji and I’m going to use it against him in a rib,” said Strongbow, a WWWF tag team champion with Chief Jay Strongbow. “Well, I found out that he had very ticklish feet. So one night me were in, I think it was Baltimore, and I grapevined his legs, and I started tickling him. I kept it up for about 10 minutes. To the crowd, it looked like he was in pain, absolute miserable pain. But he wasn’t, and I just kept it up, and kept it up. And after that, he never did anything to me. He never pulled a rib on me outside the ring.”

“I liked Fuji. We got along good,” said Randy Colley, who was Moondog Rex. “He never did give me a hard time, but I knew some guys he’d just do things that were awful. It was always a situation usually when he’d done something that nobody knew for sure it was him, but a lot of people suspected it was him. But he was a good guy too. He was one of them you had to know.”

For all the ribs played against his colleagues, Fuji was also a wonderful performer. He held the WWWF tag team titles three times with Professor Toru Tanaka and twice with Mr. Saito. As well, he was a star in many territories, from Portland to San Francisco, from Hawaii to Australia.

It all started for Fujiwara in Hawaii in 1962, but really didn’t start full-time until about 1966. He said that he knew “a lot of guys wrestling, who wanted me to become a wrestler because I was big.” At 5-foot-10, and 235 pounds, Fujiwara was a decent size, and comparable to other stars in Hawaii, most of whom trained at the gym run by Dean Higuichi, who himself would find his way into the business as Dean Ho.

Ed Francis, the promoter in Hawaii, gave Fujiwara and chance, and he never looked back.

His first mainland promotion was Don Owen’s Portland territory, and it was there that he first had to buy proper shoes instead of sandals — it was “Tough” Tony Borne who helped him find a pair. In his early years, Fuji spent a lot of time in the Pacific Northwest territory, teaming with Haru Sasaki and Tony Borne for tag gold, and having success as a single too. 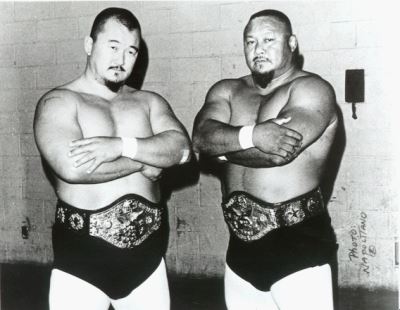 Fuji and Tanaka were brought back together in 1972. “I was wrestling in Texas and he saw me. He talked to Vince McMahon Sr. and that was it,” said Fuji about his entry into the WWWF. Assigned The Grand Wizard (Ernie Roth) as their manager, Fuji and Tanaka immediately struck gold, winning the WWWF tag belts on June 27, 1972 from Sonny King & Chief Jay Strongbow. A few months later, they main evented against the dream team of Pedro Morales & Bruno Sammartino in Madison Square Garden. Two more WWWF title reigns would follow, as well as regional titles until their split in 1979.

What worked for the team? “We were both big, for one, and I was a flyer and he was a ground worker,” Fuji said. “We clicked real good. At one time, they said we were the best tag team of the ’70s.”

Zbyszko can still vividly recall their look, the way their filled the ring. “Fuji was probably 270, and then he teamed with Tanaka. Tanaka had one of the most fantastic looks in the business — 300 pounds with that 25-inch neck of his. He looked like a giant fireplug. They both would put fear in you,” he said. “You’d look at those guys—especially Tanaka — and you’d say, ‘Jesus Christ, I wouldn’t mess with him. He’d kill you.'”

Fuji would have another successful run as WWWF tag champion with Mr. Saito (who was legitimately from Japan), and by 1985 had transitioned into a manager in the expanding WWF, handling the likes of Demolition, the Moondogs, Killer Kahn, Orient Express, Don Muraco and Yokozuna. “I enjoyed it. I really did. I wanted to be the best, and I think I did become the top manager there too,” Fuji said. “I still wrestled too, I wrestled a little, maybe eight, 10 matches a year.”

In recent years, Fuji lived a quiet life out of the business in Tennessee.

— With files from Steven Johnson and The Pro Wrestling Hall of Fame: The Tag Teams