Meng and Me one tough comic strip

The stories about Meng are legendary. Which one have you heard? Was it the time he pulled out a wrestler’s eye? How about when he bit off the nose of a person who messed with him? Perhaps it was when he cleared out a bar because the patrons were saying racist comments to the hulking grappler? Or was it when he and Chris Jericho took on the police in a Mexican airport? There are so many stories about Meng/Haku/King Tonga, that you know there must be a kernel of truth to them. One thing is for sure, few people would want to raise the ire of Meng. Perhaps it is this tough exterior that makes it humourous to envision Meng as a tough softy and that is who we see in the online comic Meng and Me.

Meng and Me (mengandme.thecomicseries.com) is a fun and fictional look at the wrestler during his time in WCW. It is his relationship with Eric Bischoff that is highlighted in the series and what would Meng do if he really was the savage he portrayed on television. 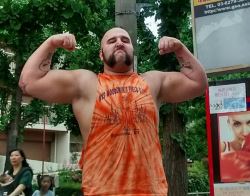 Creator of the series, Mike VanSlyke, has been a fan of wrestling ever since he happened to be flipping channels as a five year old in Oneida, New York. On that day he saw the image of the humongous Andre the Giant fill the screen and he was instantly hooked. It lead him to take up the sport of kings and he wrestles throughout the North Eastern United States and Japan as Brute VanSlyke.

The move from professional wrestler to comic strip creator does not seem to be on the “connect the dot” trajectory, but the series came about after a bull session with his colleague Dick Justice.

“Like most things it was late at night and we were delirious and tired and just trying to make our way home from the show we were on without falling asleep and dying,” said Justice. “We had just read a list online of the “top crazy Meng stories” so we started envisioning different conversations he would have backstage, which led to him saying some outlandish and funny things as the trip went on.”

Later they watched Meng matches from WCW. There was a match where Meng beat the Giant for four minutes and then the Giant beat him with a choke slam. It wasn’t just the brevity of the match or how one-sided the match was, but it was the ferocity of Meng’s super kick to the Giant’s face that caught their attention. The friends began to joke that Meng asked Eric Bischoff for the match just to kick the big grappler in the mush.

“The next match was Meng vs Goldberg for the title,” recalled VanSlyke. “So we started joking that Meng went to Eric was said he wanted to wrestle for the title even though he wasn’t a main eventer. We started doing these deep voices and making up stories pretending to be Meng and going, ‘Hey Eric….’ This joke kept evolving until finally Dick was like, hey make this a comic.” 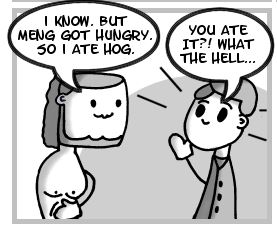 VanSlyke does not have any formal training as an artist. The simple pictures of Meng and Bischoff are perfect for the fun stories that are presented. For example, Meng finds Bischoff and laments to his friend that he has missed him. Bischoff admits that he was in a meeting and yes, it was long. Meng then introduces his pal to his tiny friend that fits in the palm of his hand. The new pal is called squishy, but the boss quickly points out that it is Rey Mysterio.

“I just want to have some fun with it,” said VanSlyke. “Colt Cabana once said he started doing his podcast so the boys had something to listen to on the road, so it would be cool if some guys out there enjoyed it enough to check it out and be in the locker room going, ‘Hey did you see this last Meng and Me?’ Who knows how long this will go but I hope people enjoy it while it does.”

Caleb Smith tried phoning Meng twice and was convinced the Tongan grappler would reach through the telephone and punch him. Thankfully, this did not happen.