Mr. Fuji is remembered as one of the most treacherous villains to ever to enter the squared circle. On March 31, the Manager of Champions will be inducted into the WWE Hall of Fame.

Mr. Fuji in the early 1980s, while still active as a wrestler. Photo by Terry Dart

SLAM! Wrestling recently caught up with Fuji via telephone to discuss his upcoming induction.

“I accomplished my goals in the ring from the beginning and then retired,” explained Fuji. “Getting inducted is something I can’t explain, it’s such a great feeling.”

Fuji captured his first title as one half of the NWA Pacific Northwest Tag Team champions with Haru Sasaki on July 27, 1966 by defeating Pepper Martin and Rene Goulet. He held the tag titles on four different occasions, three with Sasaki and once with Tony Borne. Fuji would go on to win the NWA Pacific Northwest Heavyweight title before heading to the World Wide Wrestling Federation in 1972 to form a tag team with Professor Toru Tanaka.

“I was wrestling in Texas and he [Tanaka] saw me,” recalled Fuji. “He talked to Vince McMahon Sr. and that was it. We were both big, for one, and I was a flyer and he was a ground worker. We clicked real good. At one time, they said we were the best tag team of the ’70s.”

Tanaka and Fuji would hold the WWWF World Tag Team titles on three separate occasions. Mr. Fuji would also capture both singles and tag championships in the NWA and AWA before forming a tag team with Mr. Saito in the World Wrestling Federation.

The duo won the WWF World Tag Team titles from the team of Tony Garea and Rick Martel in 1981 only to lose the belts to Chief Jay Strongbow and Jules Strongbow in June of 1982 at Madison Square Garden. However, Fuji and Saito would go on to recapture the titles in a rematch less than a month later.

Fuji began the transition from wrestler into a managerial role in the mid-1980s.

“It was something different,” recalled Fuji. “I was talking to Vince McMahon. We came up with this tuxedo and a derby.”

He first managed George “The Animal” Steele before forming an alliance with fellow WWE Hall of Famer, The Magnificent Muraco.

Muraco will be at his former manager’s side once more during the induction ceremonies at the Fox Theatre in Detroit. “Don Muraco is going to introduce me on stage at the Hall of Fame,” confirmed Fuji. The WWE 2007 Hall of Fame Induction Ceremony will air on USA Network on Saturday, March 31st, at midnight/11 CST.

Fuji would manage the likes of Kamala, Killer Khan, Sika, and “Cowboy” Bob Orton before leading Demolition to tag team gold. With Fuji in their corner, Demolition defeated Strike Force at WrestleMania IV for the WWF Tag Team titles, which they would hold for 478 days. The Powers of Pain, Orient Express and the Berzerker would all acquire the managerial services of Fuji. 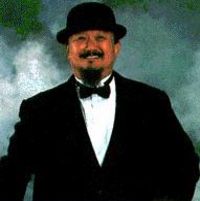 In 1992, Fuji introduced the late Yokozuna to the WWE audience. At WrestleMania XII, Fuji made one last appearance in the WWE accompanying Yokozuna to ringside before retiring.

Outside the ring, Fuji was known as an infamous prankster. In Listen, You Pencil Neck Geeks, the late Freddie Blassie recalls the constant ribs.

“Fuji’s were nonstop: in the arena, in hotels, in airports, in restaurants. And Fuji was an instigator. He’d find weak-minded wrestlers and have them do ribs for him, just to wreak more havoc. The man was incorrigible.”