It was the great Thomas Edison who said, “Opportunity is missed by most people because it is dressed in overalls and looks like work.” Unfortunately, he said nothing about opportunity coming at inopportune times. That quote comes from Bryan Danielson’s opponent in the first round of the ongoing NWA Title Tournament, Nelson Creed.

“It’s pretty typical of my career actually,” “The Bomber” said from his home in Victoria, referring to his upcoming match with Danielson. “The best opportunities always seem to come at the most inopportune times.”

To many wrestlers grinding away on the independent wrestling circuit, the opportunity to wrestle someone as well-known and talented as “The American Dragon” would be looked at as being one of the biggest matches in their careers. But for the 6-foot-2, 230-pound Creed, it’s really just another match.

“This is probably terrible to say,” he said, “but I can’t say this is the match I am looking forward to the most. There have been matches in the past I have been more excited about. I’m taking it all in stride at this point and I don’t get as excited about matches as I used to. I’m looking forward to it a lot, don’t get me wrong, but that giddy feeling I used to have about wrestling isn’t there too often anymore.”

Creed, who turns 29 in another week, recognizes that the upcoming match with Danielson — set to take place in Vancouver, B.C. on June 16th — is a “huge opportunity”, but in the seven years since Creed turned pro, he has become a little bit “disillusioned” with his sport. It doesn’t do for him what it used to. 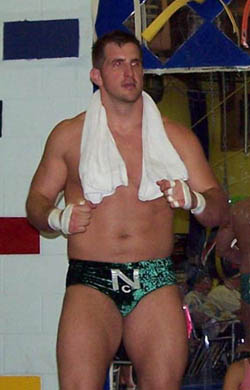 “Your perspective changes when you get into it,” he explained. “In the beginning, you want to go out there and do great and have a good match. But where I am right now, I know it’s not the end of the world if I don’t have a great match. That excitement and immature bewilderment of wrestling kind of goes away and you realize you are just wrestling another person. It’s great that it’s wrestling but it’s still just wrestling, you know?”

Disillusionment is nothing new in the world of wrestling; the independent scene had produced some of the most cynical and bitter athletes in the world. But Creed is not bitter, just a little disenfranchised. “I have an Arts degree in English and Philosophy and when I look at wrestling in that light, I wonder what redeeming qualities wrestling has for people as a culture. That’s a big question for any form of entertainment.”

He doesn’t appear to like the answer to that question and as a result has quietly decided that he needs to wind things down, stating that he plans to hang up his boots “in a couple of years.” Which brings us back to that whole opportunity thing. The most successful period in his career has come at the exact same moment as his disillusionment. How’s that for lucky?

“I used to be in way better shape and when I stopped training so intensely, that’s when the phone calls started coming,” Creed said. “Now the opportunities are there and they’re great but sure come at an interesting time in my career.”

It’s become interesting because in the not too distant past, Creed made a decision to start promoting himself more. He flew himself down to the New Japan dojo in California where he met David Marquez, one of the higher-ups in the National Wrestling Alliance organization. “They really valued my work,” Creed recalled, “and saw that I was a bigger guy that could also move.” Arrangements were made to start flying Creed to various shows in places like Las Vegas, Phoenix and Orlando.

So when the NWA decided to cut ties with TNA and hold a title tournament to crown a new World Champion, they thought of Creed as a suitable candidate to represent the West Coast in the Jack Brisco Bracket, opposite Brian Danielson. Creed believes it’s the impression he made in California that helped him win that spot.

“I don’t think I am the best local talent here in the Pacific Northwest,” Creed said. “There are guys out here that are better than me and certainly more recognized. But I’ve been pushing myself hard at a career outside of the local scene and I think they looked at me and saw that I have enough of a whole bunch of things that make me title-worthy.”

Creed, who often wrestles for Extreme Canadian Championship Wrestling, has never won any titles with that promotion, but said he was never particularly concerned with being a champion. Until now.

“To hold the NWA title, there’s no question it would be an honour,” he said. “Yes, the title was a little sullied and tarnished with that whole WCW, TNA fiasco, but they’re making a huge step in the right direction by making the wrestling important. It’s the right direction. People have forgotten the legacy of the title and about those epic Flair vs. Steamboat hour-long matches but it will come back and that is really what the NWA is going for.”

So how does Nelson Creed reconcile his disillusionment with wrestling and his apparent excitement over being an NWA Title contender? Part of it has to do with breaking his leg awhile back that required some uncomfortable knee surgery. “It’s taken a long time to come back,” he said of the injury, noting that when he decided to continue his career he didn’t want to do the same old routine anymore, which is the other reason he’s found some passion for the sport again.

“I’m coming back with a different perspective and it’s become more fun for me which is what really brought me back. And it should be fun. That’s what gets people involved in the sport in the first place.” Like it was fun when he first discovered wrestling as a six-year old boy watching Hulk Hogan and Tito Santana on television. The same type of fun that drove him to try the sport himself.

“I always felt that my life wouldn’t be complete without at least giving it a shot,” he said. Creed had always been a natural athlete, a trait he thanks the “great genetic lottery” for. “I loved athletics, loved acting and drama and since wrestling is a fusion of the two, it had a natural draw for me.”

That draw may be waning, but there’s still enough gas left in the tank for one more, good solid run and for Creed and it starts with a match against Brian Danielson on June 16th. “I know the match is big for the local scene and so fans can expect my best that night.” No doubt Danielson will feel the same, which could lead to a fantastic match in the first round of the tournament.

But Nelson Creed is looking beyond the tournament. There may only be a couple of years left in his career, but he intends to make them count. “I’ve always valued what wrestling can be, and I don’t know that it is that now,” he said, mindful of his own abilities. “But I know it can be again.”