Modern-day fans probably think of Grizzly Smith, who died today at the age of 77, mostly because of his children — Jake “The Snake” Roberts, Sam Houston, and Rockin’ Robin Smith, accomplished wrestlers all. But in his day, Smith was one-half of the country’s most-beloved and well-traveled tag teams, the Kentuckians.

Through the 1960s, the pair sold out everywhere they wrestled with a down-to-earth, simple folk appeal. “These boys are admittedly ‘a-feared of nuthin,'” wrestling writer Steven Tischler explained in 1964, calling them “by far one of the most colorful tag teams.” 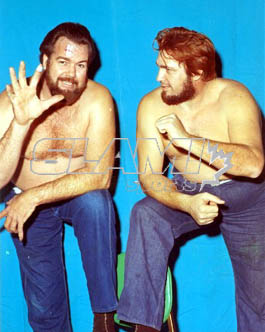 He was born Aurelian “Jake” Smith in August 6, 1932 in Whitesboro, Grayson County, Texas, to Maurice and Grace Smith, and, at about 6-8 and 350 pounds, he was a giant by the standards of his era.

When he moved from Gainesville, Texas to Amarillo, Texas, in 1958, he took employment as an oil business trainee, though he told people at the time that his goal was to be a pro wrestler. In those Texas oilfields, he got to know another big guy, Luke Brown, a.k.a. Carl Dennis Campbell Sr.

Later, when Smith headed to Oklahoma, Brown called him, looking for bookings, and Smith got the idea for a team. “We hit it off real good,” the soft-spoken Smith said in The Pro Wrestling Hall of Fame: The Tag Teams. “My brother died when he was four years old and I had two sisters. Luke was the closest thing I had to a brother.”

Using a bearhug finisher, Smith wrestled as Tiny Anderson in the Mid-Atlantic since promoters said strong memories of “brothers” John and Al Smith from the 1950s might perplex fans. But he soon became more known as Tiny Smith or Grizzly Smith. And don’t forget one of his great innovations — a cowhorn that one of the team members would sound to rally the audience to the cause.

“They used to bring a bugle and they’d blow it when they made their comeback,” said Tinker Todd in a Whatever Happened To …? interview. “When you had one of them down, the other one would pick up the horn and blow it. The guy would throw you off and tag out.”

“Beautiful” Bruce Swayze, one of his foes from the Texas-Louisiana-Oklahoma territory, recalled Smith’s in-ring tactics. “He used the big club, the big boot,” said Swayze. “He wasn’t a big bump-taker, but he got over. The people liked him because he had that hillbilly gimmick.”

The Kentuckians’ greatest feud was with Bolo and the Great Bolo, later known as the Assassins, a battle they carried from the Carolinas to Florida to California. Joe Hamilton of the Assassins, who first got to know Smith on the Oklahoma circuit, was instrumental in the multi-territory war.

According to Hamilton, the Kentuckians hadn’t made much of an impact in a swing through the Carolinas in the early ‘60s because they were being employed as typical, run-of-the-mill mat wrestlers. Hamilton and partner Tom Renesto turned their opponents into veritable Paul Bunyans.

“We never took them off their feet. Never!” Hamilton explained in his 2006 autobiography. “They were the hottest team of babyfaces in the entire country at the time. That was the biggest, consistent business the Carolinas had ever done — has ever done.” In fact, a reported 3,500 fans were turned away from one sellout in Charlotte.

One of those that believed in the rivalry between the Assassins and the Kentuckians was Smith’s oldest son, Aurelian Smith Jr., or Jake “The Snake” Roberts.

“The Assassins to me were the fucking ultimate. They scared me to death,” Roberts recalled. “I just knew those guys were chasing my dad down. They went from territory to territory with each other.”

“‘Dad, you’ve got to quit wrestling! Those guys aren’t going to give up!'” he remembered begging, and confessed that the feud brought him nightmares.

A major part of the issue, said Roberts, was that his father never smartened him up to the inner workings of the business.

“Mine never told me that, he worked it all the way, and then some. It’s sickening. How can you do that to your own child?” Roberts asked. 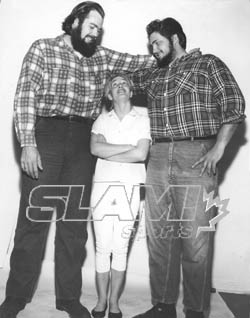 The Kentuckians dwarf a fan.

Yet Grizzly Smith regularly acknowledged to his legion of followers that his roots were in Texas, not the Bluegrass State. “They’d say, ‘No, you’re not. You’re from Kentucky.’ What could I do?” he shrugged.

Smith, known as “Pops” to colleagues, also demonstrated a good ear for the audience as a singles star.

One night in Dallas, he improvised in the ring by turning his planned squash of Dusty Rhodes into an unexpected victory for the “Dream,” based on the crowd was reacting to Rhodes. “That’s why Pops, to this day what he did for me … anything that I ever did for me couldn’t pay him back,” Rhodes recalled.

Smith eventually moved behind the curtain as a promoter. He was a booker for Bill Watts’ Louisiana promotion, and followed that up working for George Culkin in Mississippi. For a short while, he had a backstage job with World Wrestling Federation, and later was a road agent for World Championship Wrestling.

He had a lot of influence on the NWA and WCW stars. At the 2008 NWA Legends Fanfest Hall of Heroes induction, Magnum T.A. (Terry Allen) talked about Smith. “He ended up being a mentor of mine in many ways as I started my career,” Magnum said.

Smith, who was in declining health and living with relatives in Amarillo, Texas, could not make the trip. His son Mike said his dad would be pleased with the honor. “My dad really wanted to be here but it wasn’t one of his better days,” Houston said. “My dad’s got fond memories of you all, all the boys.”

He had a complicated relationship with his four children, to say the least.

There were two children from his marriage with Paula Lorene Smith, Roberts and a daughter, JoLynn.

“I was always scared to death I was going to lose my father, I was never around him anyway. I saw him twice a year for fifteen minutes, but it didn’t matter, every child still wants that father,” Roberts told IGN Sports. He has often claimed that he became a pro wrestler just to stick his success in his dad’s face. 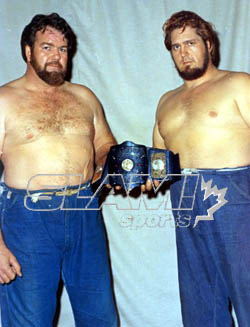 JoLynn was kidnapped and murdered. Former promoter Howard Brody writes about her in his book, Swimming With Piranhas. “[O]ver the years there’s been suspicion that Grizzly was actually the culprit. The incident hit the family hard, and although it never went away, it was rarely discussed by family members.”

In Brody’s book, Robin Smith’s years of sexual abuse at the hands of her father are detailed, as are his penchant for young girls.

“Robin was lucky that her mother got her out of the situation when she finally discovered what her daughter was going through,” wrote Brody.

A second, brief marriage, came in 1992, to Michelle D. Hyde, who was 34 years Smith’s junior, lasting a little over a year.

All three of Smith’s living children have had significant, public battles with alcohol and drug addiction, according to a variety of news accounts.

Over the last few years, a number of challenges arose in Smith’s life.

He was living with his son, Michael, when high waters struck their home near New Orleans when Hurricane Katrina made landfall. They lost most of what they owned.

Later, Alzheimer’s took over, and Smith declined in size to 165 pounds. He never recovered and died on Saturday, June 12, 2010.

“Wrestling was his life for a long, long time,” Robin explained in 2008.