Madison Rayne: Beauty, brains and the school of hard knocks 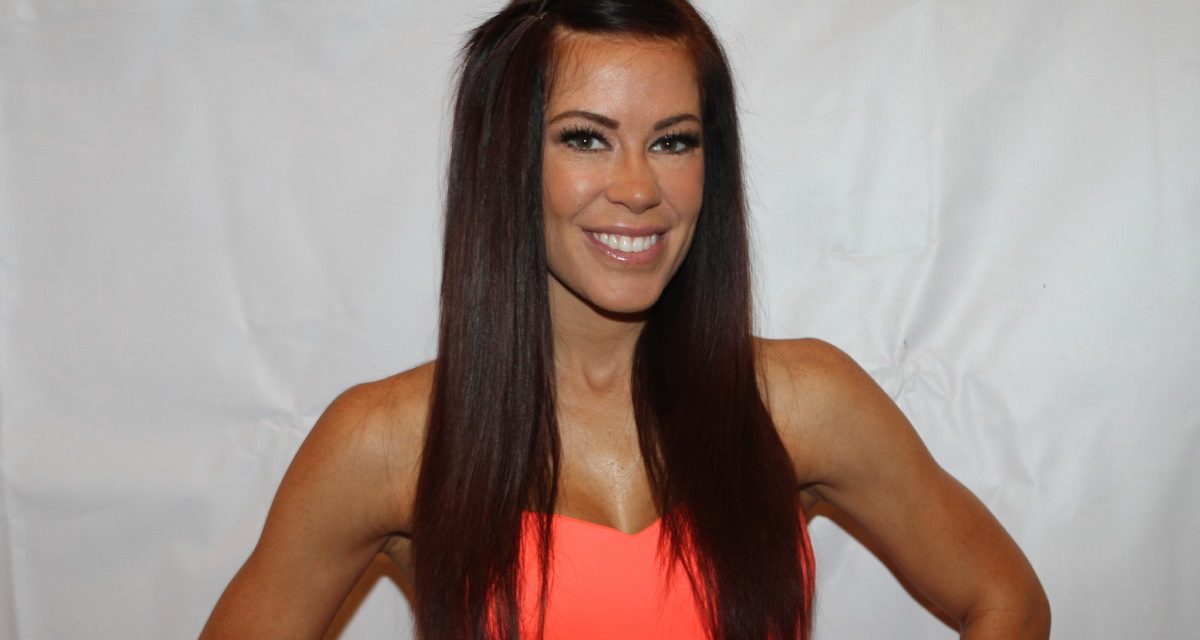 The girl who debuted in TNA in January 2009 but didn’t record her first victory until October that same year has gone on to become the company’s women’s champion and is poised to headline her division this Sunday at Slammiversary.

“It’s kind of surreal — I didn’t have the greatest start coming into TNA winning matches,” she admitted in an interview with SLAM! Wrestling. “I’ve been giving 110% in the company for a year-and-a-half now, so to have been given the opportunity to show that and for it to pay off is pretty awesome considering I’m only 24. I’m excited; I’m just taking it all in a day at a time.”

Rayne won the Knockouts title at April’s Lockdown and will be taking on Roxxi at this weekend‘s pay-per-view in Orlando, Florida. 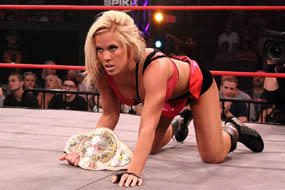 “She’s just recently come back to TNA and her first match back was with me, it was a non-title match, and she beat me. So she’s now the number one contender and I’ve got some retribution to get against her on Sunday. So it should be a really, really good match.”

Rayne downplayed the belt’s effect on her and where she stands in the company’s pecking order, pointing to the wealth of talent in the women’s dressing room.

“I don’t think of myself as the leader or the top of the food chain or anything like that. Keeping me grounded is what has made me so successful.”

Her reign comes amidst massive upheaval at TNA. The arrival of Hulk Hogan and Eric Bischoff this year has brought with it many changes, with one of them being reduced airtime on Impact for the women wrestlers. Rayne, however, didn’t believe that anyone outright decided to cut the number of Knockouts segments.

“They’re just trying to test the waters and see what works and what’s pulling ratings and what might not be. So they’re throwing a little bit of everything onto every show, and the entire roster knows that, and the girls especially know that. So we’re all just going to keep doing what we’ve been doing since the beginning, and the numbers are going to keep speaking for themselves,” Rayne said, adding the Knockouts continue to pull in “great ratings” every week.

Roster moves have also become a fact of life. One of the biggest changes came when Awesome Kong asked for and was granted her release following her highly publicized (and still ongoing) real life feud with now ex-TNA employee Bubba The Love Sponge.

“She’s an incredible athlete and performer and I personally learned a lot from her in the time that I was able to work with her in TNA,” Rayne said. “I definitely hope that with continuing to do independent shows that our paths will cross again and that I’ll get to work with her again, because she’s an absolute joy to be around and a joy to be in the ring with.”

A more recent exit is that of Tara, who also wanted out. Tara’s finale came in a career-versus-title match against Rayne at May‘s Sacrifice, a contest that Tara had requested, according to Rayne.

“She made that decision for herself and I wish her well. I hope that whatever it is that she decides to do next that she’s very successful in and maybe our paths will cross again someday, and if not, I’m glad they that they did at all.”

As TNA rebuilds and recruits new faces, Rayne said that if asked, she wouldn’t hesitate to recommend her old tag team partner and fellow Ohioan Nevaeh, with whom she won the first-ever SHIMMER Tag Team belts.

“I don’t think people have seen enough of her to know how great she is and how skilled she is, and so I’m hoping that she in the near future gets an opportunity.”

HER OWN ROAD TO THE SHOW

There’s no easy path to wrestling stardom, as evidenced by Rayne’s sacrifices to get to TNA. Don’t let her great looks fool you — she’s nobody’s dumb blonde. Before she laced up her boots, Rayne showed academic promise, earning a 4.0 grade point average in community college as she weighed majoring in radiology or physiotherapy.

But something nagged at the long-time wrestling fan, who as a child had to fend off her older brothers from applying holds on her that they’d just seen on TV. She realized college could wait, but that the pro wrestling window was a narrow one. Rayne remembered the day she went home to tell her mom she got an ‘A’ on her final but that she was dropping out in favour of becoming a pro wrestler.

“I’m not sure she totally believed me because I’d gone through phases growing up, where I’d want to be Miss America, a doctor, a teacher… but once she realized that I seriously was dropping out of college and I was going to go work part-time as a waitress or bartender and try to pursue a wrestling career, I think she was sweating a little bit, wondering how long that phase was going to last.”

Rayne found it a struggle to balance earning a living while carving a niche for herself in the wrestling business, wearing herself thin, getting too little sleep and occasionally doubting if she made the right choice.

“There were times when I kind of got down on myself. Sometimes I would go a month or almost two without getting to go to a wrestling show, and I would just be working part time and wondering if, when and what I needed to do, if I needed to change something. There were definitely times when I second guessed my decision but my gut always told me to keep going.

“There was never a time when I said I’d never wrestle any more and just go back to college, work at the restaurant and be content because I knew I wouldn’t be.”

If you’re driven enough to reach a certain goal, you’ll find ways to succeed, Rayne said. And now that she’s established herself in TNA, she said her mom buys all the pay-per-views and wrestling magazines.

“She’s really, really proud. It worked out, luckily,” Rayne said. “I can always go back to college and I fully intend to. But right now, I’m in a good place and living my dream, so I’m going to keep doing that for as long as I can.”