The first thing Sam Houston wants you to know is that he and his dad, Grizzly Smith, are safe. Forget everything that’s happened to them in the last six months — the watery destruction of their home near New Orleans, the loss of their possessions, and the infection that nearly cost Grizzly his leg. 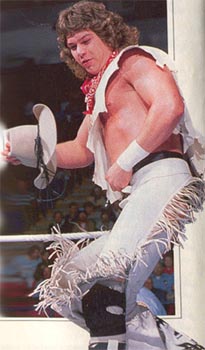 “It’s been real. And in a way, it’s been fun. But it’s not been real fun,” an upbeat Houston said from his girlfriend’s house near Baton Rouge, La. “We’re both doing a lot better now. We’re just trying to get back on our feet.”

Like millions of residents along the Gulf Coast, Houston (Mike Smith), known best for his work in the WWF in the 1980s, and his father, one of wrestling’s top stars in the 1960s, saw their lives turned topsy-turvy in a matter of hours last August.

Their apartment near a main highway in Metairie, La., was well west of Katrina when the Category 3 storm made landfall at daybreak Aug. 29. But the flooding associated with subsequent levee breeches in New Orleans dispatched waves of onrushing water that drowned their residence, and tens of thousands of other homes and businesses.

By that time, Houston already had headed to higher ground in northern Louisiana. Initially, Smith, one-half of the famed Kentuckians tag team (with Luke Brown), and a long-time backstage official in several promotions, stayed behind. Houston equipped him with a cell phone, hoping that would enable his dad, 73, to stay in contact during the storm.

But Smith balked at using the new technology, not that it would have done much good – Katrina snuffed out cellular communications in the region for days.

Even worse, the day before Katrina hit, Smith scraped his leg working at his job tending to a cemetery near the French Quarter in New Orleans. Stuck in Katrina’s watery aftermath, without access to transportation or electricity, the scrape became infected, and he started to develop a fever.

“He spent four days wallowing around in that nasty water and got a staph infection in his leg,” Houston said. “For four days, we didn’t hear from dad and they wouldn’t let anybody in the city. We were worried sick.”

Finally, a female supervisor from the cemetery navigated her way through high waters to New Orleans to check on the condition of crypts that the flood washed up and out of their graves. She dropped by to check on Smith and secured a vehicle for him to drive inland.

Smith made his to way to Tangipahoa Parish, the home of Houston’s girlfriend, but didn’t remember the directions to her residence, or her name. On his behalf, local police officers drove around asking if anyone knew a man named Grizzly Smith. Houston’s girlfriend was outside at the time, collecting ice from a Red Cross station, when she happened upon an officer, and reunited Smith with his son.

“He was sitting in the police station, all disoriented because of the infection and we went up there and got him,” Houston said. “After we got him, we drove him down to Texas [to his sister’s house] because he didn’t want to see a doctor here. That was a 20-hour trip, 10 hours up there and 10 hours back.”

“They almost had to take his leg off. That infection took a while to heal,” Houston said. A few weeks later, Smith landed back in the hospital to repair a hernia that he suffered trying to lift a heavy object.

When officials re-opened the New Orleans area to residents, Houston and a weary but recovering Smith went back to assess the damage. Water in their apartment had crested chest-high, destroying their furniture and possessions. What little remained apparently was pilfered by looters, Houston said.

“After the storm came through, the maintenance came in and busted everybody’s apartments open, and I guess they took what they wanted because we didn’t have half the stuff that was supposed to be there,” Houston said.

Their vehicles, though, were washed away. Smith had driven his son’s SUV to work at the cemetery the day before the storm. He returned home that day in a work truck to help the cemetery supervisor move some items later.

That meant Houston’s SUV was parked at the cemetery. Within hours, it was consumed by 15 feet of water. Smith lost his car to the storm, as well.

About a month ago, Houston bought his dad a 1996 Ford Crown Victoria, a big car for a big man. Incredibly, on his way to work at the cemetery, Smith was struck from behind twice by two different vehicles.

“It totaled the Crown Vic out, and now he’s in a little, bitty Chevy Malibu, which it looks like it takes a can opener to get him out of,” Houston said with a chuckle.

Despite the family’s losses, Houston is grateful for what he has. He worked part-time at a construction company, and helped his father at the cemetery, which is operated by the Firemen’s Charitable & Benevolent Association on a pretty, historic parcel near Canal Street. It’s a 45- to 50-minute drive each way from his girlfriend’s house, but Houston said the trip was well worth it one day recently.

“We’d just been cleaning the place up. And there was this woman, and I was walking by, and she was crying. I said, ‘Ma’am, what’s wrong?’ She said, ‘Who did this to this grave?’

“I said, ‘Well, that’s the first grave I cleaned up this morning. I pulled all the weeds and raked it and filled it back up with dirt and everything.’ And she said, ‘I was out here two weeks ago and the weeds were so high. My daughter’s buried there, and today’s her birthday.'”

Houston declined her offer of payment and promised he and his father would keep an eye on the plot. Soon thereafter, he was visited by Judge James F. McKay III, head of the association that oversees the Cypress Grove and Greenwood cemeteries. McKay told Houston that the woman had praised that “long-haired guy, that young man.”

The grappler responded with a smile, and when McKay asked him why he was smiling, Houston, who passed 40 a couple of years ago, responded: “Just being called ‘young!’

“Every day is a new experience for us right now, but at least we’ve got a place to stay,” Houston said. “You’ve just got to sit back and laugh about things and take it all in stride. As long as you wake up the next morning, it was a good day.”