The Wrestling Legends pay-per-view event taping this Sunday, March 5, in Orlando is meant to be a tribute to 6:05 p.m. Saturday nights, when fans used to tune in to wrestling on WTBS. But another history-making event will take place too — the PPV debut of one of the greatest announcers of all time, Lance Russell.

Believe it or not, the voice of Memphis wrestling, and various NWA/WCW shows, has never hosted a PPV event. Sure, he’s been front-and-centre on a couple of Clash of the Champions specials on WTBS, and lots and lots of other big shows, but never a PPV. 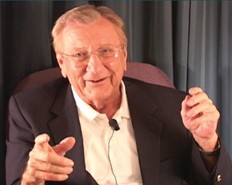 “I did two or three different syndicated shows, that’s what I did for WCW,” Russell told SLAM! Wrestling. “I’m not really that familiar with pay-per-view, and the appeal of pay-per-view big time is the fact of the big-time money that it has the capability of bringing in, even if you don’t do a sensational buyrate on the thing, you can still get pretty good money out of it.”

Russell will be teamed with Jim Cornette and Ron Niemi for announcing duties on the show. He realizes it may be hard to get a word in on Cornette. “I may have to zing an elbow in on him to get him to gasp so I can get in my two cents worth!” he joked.

Sal Corrente is the man behind the event, just as he was behind the two WrestleReunion events in 2005, that featured a daytime meet-and-greet and autograph signings, and an a centrepiece evening card.

“We just wanted to do something in tribute to the legends,” Corrente explained. “We wanted to do a tribute to WCW, basically 6:05 Saturday night, which was the big wrestling thing back in the day.”

A New York City boy, Corrente never bought into the Atlanta Braves as “America’s Team” because of the early reach of WTBS. “We hope to really bring people back, in their minds and their memories. Let’s face it, if you were a real wrestling fan, you couldn’t wait until 6:05 Saturday night — and if the friggin’ Braves ran overtime, you cursed them!”

“Where Wrestle Reunion was more of a star-studded card with tremendous matches and history attached to them, even taking angles from 20 years ago and bringing them back to life, that’s really not what this is,” said Corrente. “This is just a night of good entertainment and stars. Diamond Dallas Page is wrestling Chris Kanyon. Nikolai Volkoff and Hacksaw Duggan, the Armstrongs and the Midnight Express.”

Russell is looking forward to the event, and knowing that good friend Jimmy Hart is the key man running things behind-the-scenes helped make the decision to come an easy one. (Corrente said Tom Prichard is the other key man backstage.) But Russell admitted that he’ll miss the convention part of the past WrestleReunion events. “I had a lot of fun seeing guys, number one, that I hadn’t seen in a long, long time. Two, it was great to see the people at the convention. I think I’m going to miss that as much as anything.”

For Corrente, the modest 1,500 seating capacity is balanced off with the professionalism of the Hard Rock corporation. “This event, it’s a whole different ballgame. When you’re working with a facility like the Hard Rock, it’s a whole different thing than what independent wrestling is used to,” Corrente said. “Obviously, 1,500 people is not going to cover the expense of an event like this. We’re looking for things out of the pay-per-view to do well.”

Clearances on cable outlets is still being arranged. Announced so far are: InDemand in the U.S., and Viewers Choice Canada, Bell ExpressVu and Star Choice in Canada. Most will air at 6:05 p.m. ET on April 29, with repeats to follow.