Sad news today from the family of Lance Russell. Just days after his daughter died, Lance himself has passed away on October 3, 2017. He was 91. 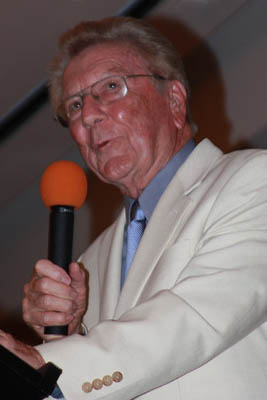 “Hey All, wanted to share the sad news that dad passed away this morning. You all have been a blessing in this difficult time. Thank You!!!” read the tweet on On Lance Russell’s Twitter account (@memphislance).

Russell’s daughter Valerie died from cancer on Friday, and on the same day, Lance broke his hip.

For most of his career, Russell was considered the voice of Memphis wrestling. Jerry “The King” Lawler, the top star ever in that city, tweeted out the news as well: “Memphis Wrestling Legend, Lance Russell passed away today. The wrestling world and I have lost a great friend. Condolences to his family.”

Dave Brown was beside Russell on countless episodes of Memphis wrestling. “My lifetime friend, Lance Russell died early this morning. I cannot express how sad I am. He was responsible for my tv career success,” he tweeted.

But Russell’s career as a pro wrestling announcer didn’t start in Memphis. He was working at a TV station in Jackson, Tenn., when he called his first mat action for a new show that promoters Nick Gulas and Roy Welch wanted to run. He never looked back. “I said, ‘I’ve never done it, but I feel like I ought to be able to do it,’ ” he recalled to SLAM! Wrestling in 2009. “I started doing commentary on it, and just loved it and had a lot of fun doing it.”

Not long after Jim Crockett’s NWA World Championship Wrestling expanded, Russell came on board in 1989, and was also a part of a national broadcast for the first time, bringing his home-cooked, low-key style to the masses.

Russell has been honoured plenty for his work as announced, including an award by the Cauliflower Alley Club, and being inducted into The Wrestling Observer Hall of Fame (1996) and the National Wrestling Alliance Hall of Fame (2006), as well as the NWA Wrestling Legends Hall of Heroes (2009).

He had been married to his wife, Audrey, for 67 years, until her death on June 28, 2014. They had three children: William, Valerie and Shane.

More details on Russell’s passing are known at this time, and we will continue to work on this story throughout the day.

For more on Lance Russell, see our archive: