Gavin Quinn on top as XICW brings wrestling back to Cobo

When XICW brings professional wrestling back to Detroit’s Cobo Center on Saturday, October 7th, it’ll have a local star front and center as its Midwest Heavyweight champion — “GQ” Gavin Quinn.

He’ll defend the title in a ladder match against Hakim Zane and Impact Wrestling’s Rockstar Spud.

And just as fitting as it is having Quinn in the spotlight, it’s equally fitting that the Midwest Heavyweight title belt is on the line too. 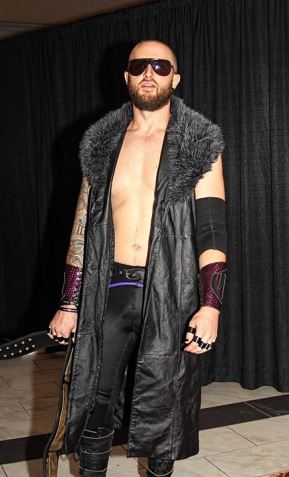 The XICW is run by Malcolm Monroe II, better known to fans as the Dirty Black Assassin, or DBA. He’ll be wrestling too, teaming with his son, Malcolm Monroe III – MM3 – in a cage match against Impact Wrestling’s Decay (Crazzy Steve and Abyss).

“Gavin Quinn is known as Michigan’s best kept secret. I’ve known GQ for a really long time,” said Malcolm Monroe III. “He came into XICW and literally took whatever he wanted. In his first match, he became the Lightheavyweight champion. He never lost the title, he just let it go just so he could get the Midwest Heavyweight championship, which is a super-prestigious title that has been held by many greats. … The title has a lot of meaning, it’s a really old title. He came in and he captured it, and he’s been king of the mountain ever since. I’ve wrestled GQ a couple of times, for a couple of different companies, and he’s by far one of my favourite opponents.”

Perhaps part of the reason Gavin Quinn is such a secret is how hard he is to reach. When he’s not at his day job, mostly behind a desk at GM, he’s spending time with his four-month-old son and his girlfriend, or heading to bed by 8 p.m., so he can get up around 3 a.m. for a good, solid workout before heading off to work. Then on weekends, he’s off wrestling wherever he can. 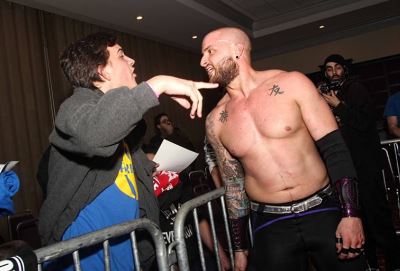 A heel through and through, Gavin Quinn argues with a ringside fan. Photo by Shannon Callahan

XICW has been a great home for GQ, who is usually a villainous character. “XICW’s great. They’ve always treated me very well. It been around Michigan for upwards of 20 years, so it’s been around double longer as I have, so that’s saying something in and of itself,” said Quinn (real name Kyle Bacon). “In a world where it’s hard to make money and longevity is really tough, XICW’s done it and has it, so hats off to them. I love working there. I’m really close with Malcolm and everybody else there behind the scenes there, and I have a lot of fun.”

Like many, Quinn became fascinated by professional wrestling, but it was in a bit of a downswing, so it wasn’t something that he publicized a ton. With a few friends in Detroit, he started a backyard promotion. The MySpace social media site allowed others with similar interests to get together.

When the 6-foot, 210-pound Quinn decided to pursue his dream and train properly to become a pro wrestler, he attended Truth Martini’s House of Truth school in town. With the backyard experience in his pocket, he found that he didn’t have the fear of falling (and falling) that many classmates did, so picked up the skills quickly. 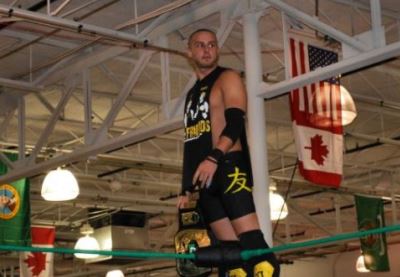 Besides what he learned from Martini, Quinn credited Petey Williams and N8 Mattson for mentoring him.

“I first met Gavin Quinn not too long after he finished training at Truth Martini’s school. From the beginning he was always very respectful, and made it a point to ask me to critique his matches. At the time he was only working a couple shows a month, but once he started getting more experience he really flourished,” said Mattson. “After seeing him hang with guys like Jimmy Jacobs, Petey Williams and Zach Gowen, I definitely took note of his improvements. The first time I locked up with GQ, I knew he had the potential to break out of the local scene. Today he is unquestionably one of the top guys in Michigan, and one of my favorites to watch and work with.” 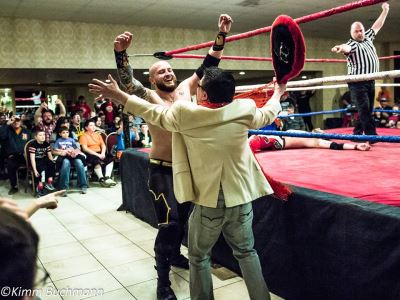 Quinn knows he has been fortunate to get to wrestle many featured names through XICW and elsewhere. “They’ve had me wrestle some of the best in the world. Just this year alone I’ve wrestled PJ Black, I wrestled Billy Gunn, I wrestled Michael Elgin, I wrestled Rhino, Robbie E, the list goes on. There’s been a lot, they’ve brought in a lot just to wrestle me and for me to prove myself. I like to think that I have. So they keep testing me, testing me and testing me, and I love it. It’s awesome. It helps me know where I am, confirm that I’m headed to the places that I would like to be, and if I can hang with these guys I can hang with just about anybody. So that’s where I’d like to think that I’m at.” 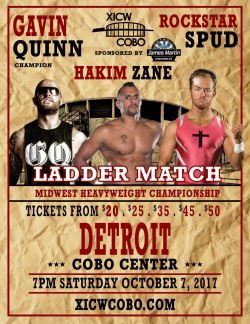 Rockstar Spud tweeted out his plan for Saturday’s match: “NEXT SATURDAY – I’m in Detroit, MI in a Ladder Match. I’m going to watch loads of VHS tapes to see how I can win this thing. #HolySpud” … and in another tweet, “I get to do some cool moves with a ladder like Razor Ramon & Shawn Michaels did at WM10 on 7 Oct in Detroit, MI #HolySpud”

At 31 years of age, Quinn figures he is just coming into his prime now, and is aiming for that next level.

“It’s a grind. I’m putting in the miles for though. I’ve done a lot of travelling, every weekend I’m on shows. This last weekend was the first weekend that I had off in I can’t tell you how long, but that’s good, man; busy is good. I do a lot of stuff in Canada now, I work for Alpha-1 a lot, or with Superkick’d every month.”

But being only 31, he doesn’t remember the glory days of Cobo Hall, when The Sheik ran roughshod over opponents, leaving blood and destruction in his path, or the NWA and WWF shows at the famed area in downtown arena.

“I know a little bit; I’m not as knowledgeable as I should be, to be honest, but I know it has a lot of history and it means a lot to a lot of people,” Quinn admitted. “The fact that I get to be a part of it, a really big part of it, is cool, man. It’s an honour for sure.”