Lance Russell: A voice for the ages

When Lance Russell gets behind the microphone Friday in Charlotte, N.C., he can talk easily, without worrying that a bag of flour is directed toward his noggin or that some tough hombre is itching to hurl him across a wrestling ring.

Russell suffered those indignities, and more like them, in a career as a wrestling announcer, mostly in Tennessee, that dates from the late 1950s. But he should experience smoother going, and considerably more respect, when he takes the podium as the second broadcaster inducted into the NWA Wrestling Legends Hall of Heroes. 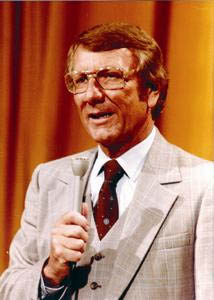 “I’m really looking forward to it,” Russell said from his home in Gulf Breeze, Fla. “There are a lot of guys there whom I have not seen in some time and hopefully, we’ll have a chance to catch up.”

In Charlotte, Russell will be reunited with veteran Mid-Atlantic broadcaster Bob Caudle, the lone announcer in the three-year-old hall, which has become the centerpiece of promoter Greg Price’s annual NWA Legends Fanfest. Russell and Caudle worked together at World Championship Wrestling toward the end of their careers in the late 1980s and early 1990s.

“Bob and his wife Jackie, and my wife Audrey, were all friends. So Bob called and we talked about it, and then Greg called and said they wanted induct me into hall of fame,” Russell said. “That made it particularly appealing, when we found Bob was affiliated with Greg and has been coming every year.”

This will be the third such honor for the octogenarian; he was named to the Wrestling Observer Hall of Fame in 1996 and the National Wrestling Alliance Hall of Fame in 2006. Not bad for a young fan who grew up in Dayton, Ohio, and envisioned himself as a big-time play-by-play for a pro sports league.

But while working at a TV station in Jackson, Tenn., some 50 years ago, Russell called his first mat action for a new show that promoters Nick Gulas and Roy Welch wanted to run. He never looked back. “I said, ‘I’ve never done it, but I feel like I ought to be able to do it,’ ” he recalled. “I started doing commentary on it, and just loved it and had a lot of fun doing it.”

For the sake of perspective, the late Gordon Solie, for many years the voice of Florida wrestling, was nicknamed the “dean” of wrestling announcers. Russell started three years before Solie, with whom he also worked at WCW. “I used to kid Gordon about that. I said, ‘What is this dean of wrestling’ business? Who is the dean in this group?’ ” Russell said with a chuckle. “He couldn’t believe it when he found out that I had been working longer in the business than he had. That was always a lot of fun and a bone of laughing contention between Gordon and I.”

Though he called occasional matches even after he retired from WCW in 1993, Russell’s contribution to wrestling extends beyond a mere timeline. For generations of fans, he offered an amiable mix of incredulity and gravity that made sense out of the wild and wooly Memphis territory, even when manager Jimmy Hart dumped flour on his head or the Road Warriors manhandled him during one ring melee. “In my heart, he’s the announcer equivalent of [former world champ] Lou Thesz — and I think he’d consider that to be a much bigger compliment than any comparison to an actor,” said wrestling columnist Scott Bowden, a veteran heel manager in Tennessee.

He’s also responsible for one of the most familiar faces in the Memphis television market. Dave Brown was just a University of Memphis student and a kid disc jockey at WHBQ radio in 1967, when Russell, working on the TV side of WHBQ, an ABC affiliate, tapped him as his sidekick for studio wrestling. The duo stayed together for about a quarter-century, becoming the longest running tag team in the annals of wrestling broadcasting. 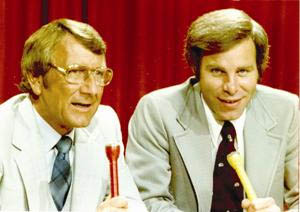 “It is just one of those things, the chemistry was perfect, Lance was gracious to share the spotlight, and we became a team,” reflected Brown, for 32 years the weather director at WMC-TV in Memphis. “As I occasionally watch portions of those old shows, I realize now more than I did then that I was a part of something very special.”

Less known was the fact that Russell wore a daytime hat programming WHBQ for years, and, in the process, changed the viewing habits of wrestling fans across the country. Grappling ran on Saturday afternoons in Memphis, but was forever being interrupted or curtailed by ABC’s Wide World of Sports and college football, until Russell had a brainstorm.

“I’ll never forget when I told Nick Gulas we were going to move from Saturday afternoon where we had been constantly battered around by Wide World and we were going to move to 11 on a Saturday morning,” Russell said. An incredulous Gulas responded: “Eleven o’clock in the morning? Are you crazy, man? Nobody’ll watch the show. Nothing but kids are watching.” But Russell had done his homework, and Memphis wrestling garnered unheard-of ratings of 20 to 25, the highest local market penetration in the country. Promotions across the country started switching their time slots to follow the lead of Memphis.

Russell didn’t care to sit backstage and pour over script after script, which is one reason, observers say, why his calls sounded realistic and authentic. “I got to the point after seeing 2,000 matches or so, I kind of got the string of how everything went down. In my mind, I could figure that out, not being totally stupid,” he reflected. “‘You want to hear how this match is going?’ The answer would be ‘no.’ We just let it flow, how’s it going to hit you? It just seemed to work well that way.”

As Tennessee wrestling historian Tim Dills put it: “Russell’s ability to sell angles to fans, to lead young stars through interviews and to communicate his disgust at the heinous acts of the nefarious bad guys, among his other talents, made him one of the area’s most valued performers over the years.”

Ignorance was not always bliss, though. One day, bad guy Jos Leduc got the bright idea, on live TV, of mutilating his arm with an axe to prove how tough he was. “Nobody was more stunned than I was. I didn’t know this guy, and to my shock and amazement, because all the time that I was doing wrestling, I was an executive for RKO General [the TV station owner], so I had major responsibilities in there,” Russell said. “To see that right on camera, with him bringing that axe down, and that skin just peeling back and slowly starts to spout blood out. What a shock that was!”

It didn’t hurt, Russell acknowledged, that he was surrounded by some of the best talkers in the business, such as Jackie Fargo, Austin Idol, and Jerry “The King” Lawler. Russell gave Lawler his initial burst of publicity when he displayed a young king’s drawings of Fargo and other wrestlers one Saturday. The friendship stood the test of time and Russell called the action when Lawler lifted the American Wrestling Association World title from Curt Hennig in May 1988.

“I loved to work with a lot of guys.” Russell said. “The closest was Jerry Lawler. I started knowing Lawler when he was 15 years old, because he drew the pictures. … He was very good, and still is, certainly in his knowledge. He knew how to work with young guys, teach them and put them over as well as anybody I have ever seen do it.” That includes Lawler’s famous 1982-83 feud with actor and humorist Andy Kaufman, a back-and-forth of mirth and madness that formed the basis for today’s blend of pro wrestling with Hollywood celebs.

But even among Kaufman’s antics, accessible to the uninformed at LanceRussell.com, Russell somehow maintained his cool and imparted respectability to the events. One of his Sunday school students, Linton Weeks, formerly of the Washington Post and now with National Public Radio, once credited Russell with understanding that even tomfoolery can have a serious side.

“There is something about wrestling that goes beyond its absurdity. Good usually wins over evil. In large part I owe my appreciation of wrestling to Lance Russell. He taught me not to turn my nose up at other people, even fat chump wrestlers.”