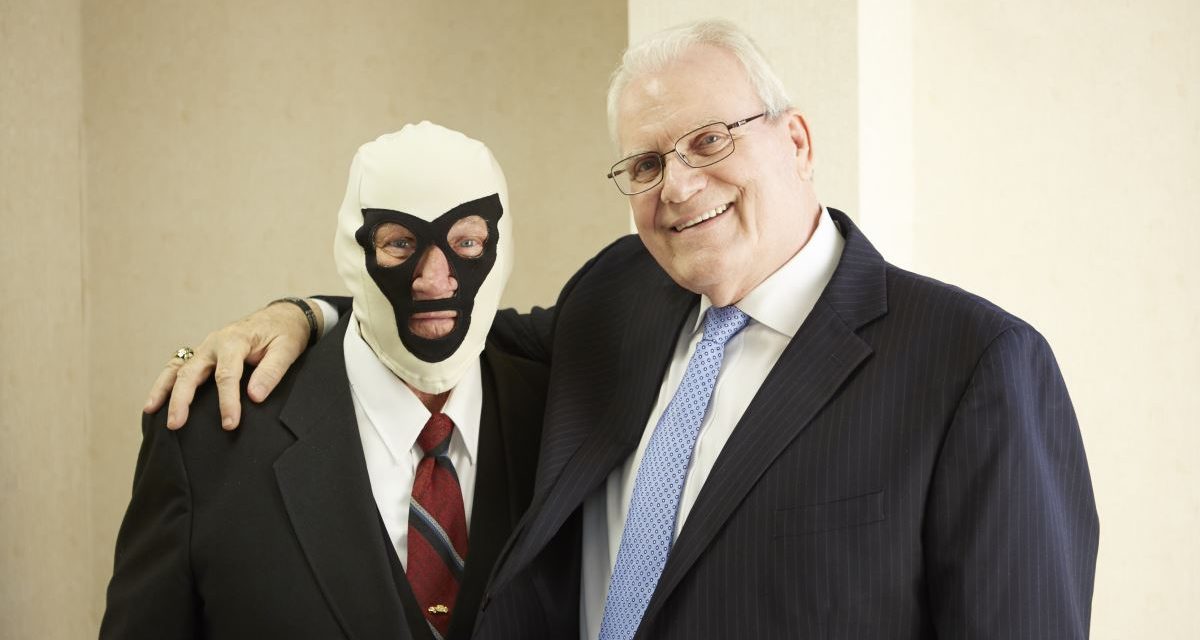 JOHNSTOWN, NY — The thirteenth induction class of the Professional Wrestling Hall of Fame had a decidedly mysterious look, with two of the main inductees, The Masked Superstar and Mr. Wrestling II, having achieved fame under a mask.

And the two men under those masks, Bill Eadie and Johnny Walker, delivered very different speeches upon their induction.

Walker’s time at the podium was short and Southern sweet, wearing his famed white mask with black piping. He only spoke for a couple of minutes. Instead, it was his son, Robert, the youngest of his his three sons, that spoke the longest. 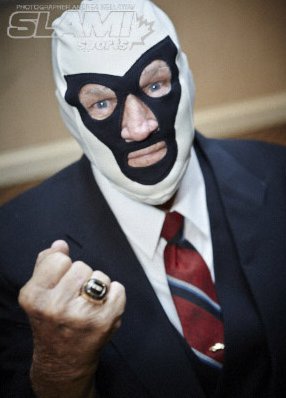 “We were truly a wrestling family,” said Robert Walker, explaining to the audience of 250 at the Holiday Inn that his late mother, Olivia, was the seamstress who designed and sewed some of the most iconic outfits in pro wrestling history, including some of Ric Flair’s finest robes. The Hall of Fame in nearby Amsterdam has a number of Olivia’s robes on display.

Bill Eadie also brought up family. “The best tag team partner I had was my wife,” said the veteran who also worked as a Mongol and as half of the WWF tag team champion Demolition.

Though Eadie did not wear his mask during his speech, he achieved singles stardom under the Masked Superstar name, he did thank booker George Scott, whose idea the change of character was.

He also delivered a big thank you to the fans.

“It’s not corny, it’s not a cliché — the fans here are a part of the business,” he said. “It’s very humbling to see that I made an impression.” 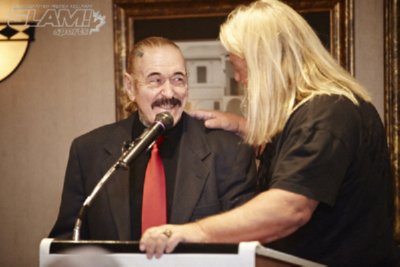 Also making an impression were the comedic duo of Greg Valentine and Don Fargo.

Fargo (real name Don Kalt) was inducted into the tag team category along with the late Jackie Fargo, and it was Valentine who did the honours. It was an appropriate choice, as Valentine worked for a while as Johnny Fargo, partner to Don Fargo.

Valentine began by telling the crowd about his early days, and how partnering with Fargo changed his life — “[he was] very instrumental in my life. He taught me how to take bumps. Later on, I learned how not to take a bump,” cracked The Hammer.

When Fargo joined Valentine at the podium, they became a tag team again, with Valentine leading the conversation and Fargo the joke man.

Many of the stories involved Fargo being naked.

On his own, Fargo was almost morbid, but in a funny way.

“I was scared I was going to die before I got here,” he said. “I’m really honoured. Of course, I thought it was a rib.”

Eadie, Walker and Fargo were the three living inductees able to attend. 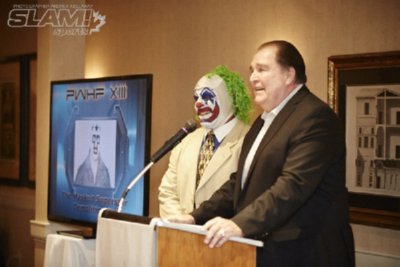 “Magnificent” Don Muraco, who emcee Brian Blair said had a “surfer boy look with the body of Adonis,” was unable to make it, having just had hip surgery.

– Bruiser Brody, who was enshrined by his long-time friend and tag team partner Stan Hansen and his widow, Barbara Goodish. Hansen said that he learned from Frank Goodish not to trust promoters, and “how to screw them before they screw you.” Barbara couldn’t help but chuckle when she said, “he wasn’t always easy to get along with.”

– Gary Hart was put in the colleague category by J.J. Dillon, who said that Hart was “never given the credit that he deserved” because he never made it to New York and the WWF, with its national scale.

– Joyce Grable inducted Sherri Martel into the women’s category. Grable, who was inducted last year and battled cancer, said that Martel was someone who “could do anything,” from working as a babyface, heel or manager. Grable teared up at some of the memories of Martel, who died a few years ago. “Ya’ll just think of her in the good times, because when you were around Sherri Martel you were going to have a good time whether you wanted to or not.”

– Lord Alfred Hayes was inducted by Davey O’Hannon, who said the Lord “might have been the nicest guy I ever met in this business” who “knew the business in and out.” He closed the honour for the late Hayes with a “Tallyho!”

– Stu Hart went into the pioneer category, inducted by two of his sons, Smith and Ross Hart. Naturally, there was a Stu Hart impression, and Smith Hart even shared a tale of Hall of Fame boxer Jake LaMotta doing an impression of Stu.

– Junior heavyweight star and later a promoter, Leroy McGuirk was inducted by this writer, Greg Oliver, aided at the last second by the emcee, Brian Blair, who was married for a time to McGuirk’s daughter, the former WWF ring announcer, Mike McGuirk. Blair couldn’t keep a straight face as he recalled meeting Leroy for the first time, when he didn’t know his future father-in-law was in the room until he started stumbling, slowly making his way with his hands outstretched — McGuirk was blind. “I didn’t really know if he was blind or not. This is wrestling.”

The final word goes to Bill Eadie, who was the final speaker. He first attended a Pro Wrestling Hall of Fame event in 2003, and remarked on the changes. “My God, it’s grown” he said of the physical hall, which is a destination any true wrestling fan should see.

“Being inducted into the Hall of Fame is the main event,” concluded Eadie.