‘I Ain’t No Pig Farmer!’ offers a rare promoter’s perspective

To adapt a famous movie line, “You had me at Chris Colt.” Simply put, Dean Silverstone’s chapter on the legendary madman of professional wrestling is a must-read for fans who think that CM Punk is a rebel in any way, shape or form. 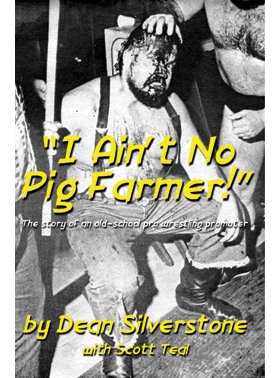 Silverstone’s autobiography, the oddly-titled “I Ain’t No Pig Farmer!”, is the latest masterpiece from Crowbar Press.

But who is Dean Silverstone and why should you care?

Well, first and foremost, in the spirit of full disclosure, Dean has become someone that I know and trust in the wrestling business, a friend who will not try to B.S. me and put himself over at the expense of others. With a family wedding out in Washington state this summer, I’m looking forward to visiting with him.

He has been a big part of the Cauliflower Alley Club for many years, and we have gotten to know each other there, both through his efforts in publishing The Ear newsletter, but also the couple of times I put together the banquet program.

Aside from that, he was involved in professional wrestling for years in Seattle, evolving from a fan, to producing the program for the Seattle promotion run by Harry Elliott (starting when Dean was only 14!), and later the Vancouver, BC, promotion as well. Along the way, Silverstone refereed, promoted spot shows, handled advertising, and learned how to deal with people.

The culmination of his knowledge was promoting his own shows in Washington state, under the Super Star Championship Wrestling banner.

To date, there are no other books quite like “I Ain’t No Pig Farmer!”, that take the reader truly behind the scenes in wrestling promotion. Silverstone shares details on everything relating to his company, from whom he picked to work the shows and why, to some of his techniques he used in convincing local businesses to get on board. Likewise, the details on landing the television deals are revealing and offer tremendous background into how the businesses of local stations worked in the 1970s. (Butcher Vachon’s third book of his trilogy offers a lot on Grand Prix Wrestling in Montreal, but not anywhere close to this level of detail.)

Since the promotion didn’t run that long, Silverstone takes the reader throughout its entire run, and offers details both great and small on the personalities that filled the positions on his cards.The title of the book is actually a reference to a famous line that Lumberjack Luke spat out on television one time, which led to huge publicity for the promotion and great box office. Luke — Don Morrison — is certainly one of the key figures in Silverstone’s story; others include Eddie Sullivan, Rip Tyler, Arman Hussain, John Quinn, Paddy Ryan, Shag Thomas, Tony Borne, and Dutch Savage.

Here’s a great example of the detail and description that is the strength of this book, where Silverstone talks about Bull Johnson, a wrestler from Hamilton, Ontario, whose two sons, Bullwhip Danny and Randy, would later become workers as well. In Seattle, Johnson was a Mongol, with a shaved head save for a pigtail at the front of his skull.

“Bull had the most amazing ability to fall asleep in a car I have ever seen. He didn’t drive, but always rode with someone. He would get into the back seat, sit down, and someone else would have to shut the back door because he would already be asleep. It was amazing, but I saw it happened dozens of times. You couldn’t help but be curious about the phenomenon because he’d be snoring as soon as his buttocks touched the back seat. He wouldn’t wake up, either, until the driver pulled into the spot outside the venue where he planned to leave the car.”

There is also some intriguing insight into other Pacific Northwest promoters. Don Owen of Portland is not portrayed as the saint that most wrestlers usually talk him up as, and Silverstone directly addresses Owen’s anti-Semitism, among his other faults. The Vancouver pair of Gene Kiniski and Sandor Kovacs come off poorly in a different way, as two men who held grudges to the detriment of their business as promoters. Other local personalities, such as wrestling historian J Michael Kenyon, who first met Silverstone when both were teens, gets a meaty part in the story, and not just because Kenyon started the fan club for Shag Thomas, perhaps the Pacific Northwest’s greatest babyface in history.

But it’s the Chris Colt chapter that really got me. He is such a mythical character at this point, a gay man in a very macho business who was so far ahead of his time as far as theatrics go, it’s almost comical. And he was one of the best talents ever in the ring, even if he was uncontrollable and incorrigible away from the ring. Paired with Ron Dupree, they were the Hell’s Angels, and variations thereof, one of the top tag teams in the world, able to generate massive heat in the ring and stand up to confrontational motorcycle gang members when necessary.

Imagine working with Colt every night, as Silverstone describes: “Our nightly routine at the arenas went as follows; match instructions, disagreement, argument, harsh words, headaches, and then performance, which always was flawless. When the matches were over, he and I took on a side relationship. Like my own three-legged puppy, I wanted to spend time with him, in the hope of controlling his outrageous behavior that really could have gotten him into a lot of trouble.”

There are many names that even I was unfamiliar with from the Pacific Northwest, but that in no way diminishes what Silverstone has delivered here. It’s an amazing book, detailed and diligent in its details (like most of the Crowbar Press books).

And it’s an amazing book without the final quarter of it, where Silverstone segues from a wrestling promoter to one of the leading record collectors/dealers in the world, operating a number of stores in Washington at the peak of the run for Golden Oldies Records & CDs. I love music as much as the next guy, but man, Silverstone’s knowledge and experiences are truly mindboggling when it comes to the musical end. Let’s put it this way, I will be lending this book to my brother-in-law, who is a real music junkie, just for the chapters on the music business, with one store still running, plus the online sales.

At the end of the book, “I Ain’t No Pig Farmer!” turns wistful and melancholy, and Silverstone recalls the reunions he and his wife Ruth have hosted at their home outside of Seattle, as well as the many people he dealt with through the Cauliflower Alley Club.

“The things I miss the most about wrestling are the road trips, the relationships I had with so many people, and the business aspect of professional wrestling. Most of all, I miss the era when wrestling was ‘real’ and the wrestlers were the only people who really knew whether or not if it was real or fake,” Silverstone writes near the end.It’s a fitting conclusion, because those days of kayfabe in wrestling might be gone, but thanks to books like “I Ain’t No Pig Farmer!” the stories from those days are not.