Colt Cabana is a trendsetter in professional wrestling. He is the master of merchandise, podcasting and, for a second time, creating a wrestling documentary. His latest offering is entitled The Wrestling Road Diaries Too and it lives up to the high expectations garnered from the first instalment. 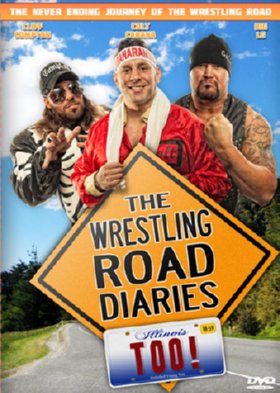 The Wrestling Road Diaries Too follows three professional wrestlers — Colt Cabana, The Big L.G. (Luke Gallows in WWE) and Cliff Compton (Domino in WWE) — on a wrestling road trip through small towns across America. While on the trip each wrestler tells his story to the audience from a very personal and heartfelt place.

From the opening scene it is evident that the three grapplers love the sport of wrestling. It also becomes clear that these men are very close friends who have developed a bond during their trips through the wrestling landscape.

In the first of many intimate moments each man discusses their WWE tenure. The Big L.G. says that he found it difficult to lose a good paying job. He also laments that the travelling friends you have one day are gone as soon as you are fired from the WWE and your support network has been shattered.

One of the themes throughout the video is The Big L.G.’s injury that he is struggling with. He desperately wants to make his bookings as a matter of pride and as a matter of feeding his family. Cabana saw the situation in the cold stark reality that it is: “The more time you take off, the less time the people who make big decisions are thinking about you and then you become an afterthought.” These cold but realistic words compel The Big L.G. to struggle from town to town in order to keep his good name.

In this video you get to see the three wrestlers interact with the fans in a genuine way. They seem to really enjoy bringing happiness to people in the small towns they visit. Cabana makes it clear that he loves working the independent wrestling circuit. “The fans are true supporters of the sport and that it is gratifying to make people feel good.” Cabana points out that he checks out the crowd before his match and tries to gauge what they would want to see not what he would rather do.

For three tough men to openly talk about their loved ones was very touching. The Big L.G. discussed his relationship with his son and how he wants to spoil him when he is off the road. Compton revealed the moment that he knew his father was proud of him and his line of work.

Seeing the crop of local independent wrestlers in each of the towns they travel to is interesting. You get to see all body types and experience levels in the ring. Some poor wrestler in one of the small towns explains to the three that he has been on the “gas” for some time now and is looking good. All three men look at one another in shock as the small town fellow is clearly potbellied and out of shape.

The bond that Colt, Cliff and L.G. share is undeniably strong. They support each other through their difficulties with humour and some hard thought realism. They come across almost as marines in that no man will be left behind.

Perhaps some of the funniest moments come during the long car rides. The Big L.G. kept his mates entertained with ridiculous stories told with funny voices. It is this humour that balances the movie as it takes some of the edge off of the stories of moving from their dream jobs at the WWE to this new reality of hopping around the globe to get their next booking. By no means is this portrayed as tragic, but each man saw it as a new beginning. They saw it as a way to further hone their craft and to do something they love a little longer.

At one hour and 46 minutes The Wrestling Road Diaries Too is a must see for the serious fan of the sport of professional wrestling. You get to witness these gentlemen stoked to be performing in front of crowds and then the reality of going from hotel room, to car, to the next town. This movie is wrestling at its most honest and intimate.