Younger readers aren’t going to remember this, but there was a time when an encyclopedia was a major household investment, and you’d be in awe visiting a friend’s place if their parents had a full collection of a high-quality set, like Encyclopedia Britannica. You’d have 20 or more volumes, based on how the alphabet was broken up.

Now, imagine only getting to choose four letters out of 26.

That’s the best way to describe An Encyclopedia of Women’s Wrestling: 100 Profiles of the Strongest in the Sport. 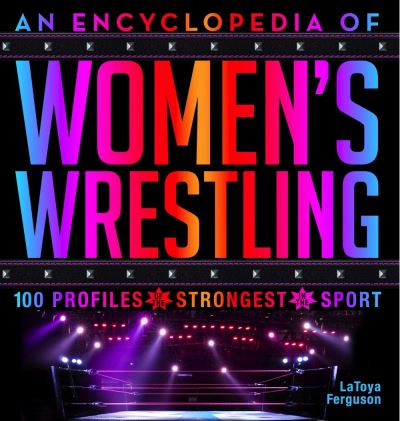 But an encyclopedia it is not, and I suspect it was the publisher (Sterling) which came up with the name. In the end, it does a disservice by promising more than it delivers.

So kudos for recognizing what it is not, meaning I’ll now focus on what it is.

In An Encyclopedia of Women’s Wrestling, you get a decent introduction, well, as much as you can get in three pages, and then you’re launched right into the profiles over its 288 pages.

If you are a fan of the current wrestling scene, as of mid-2018, you’ll love it, as so many of the key women in pro wrestling are featured. In particular, the coverage of major Japanese names is great, and an excellent reminder of how awesome the likes of Asuka and Kairi Sane were before they were on the WWE’s main roster, and why the Jumping Bomb Angels ruled. If you are a fan of SHIMMER, Women Superstars United (WSU), and other hard-hitting women’s wrestling promotions, and the Mae Young Classic, it works.

If you are looking for historical profiles, this is not the book for you. Mae Young, Fabulous Moolah and Mildred Burke constitute the oldest names, and then there are a couple like Sherri Martel and Wendi Richter from the late ’70s into the 1980s.

Ferguson provides details on the years each woman was active, who trained them, where they were billed from, their accomplishments like title reigns, ring names, and notable matches. Basics like real name, height and weight are omitted, or, in a couple of cases, covered in the text. Personal details, like marriages, relationships, kids, and the like, don’t make the cut very often. There are quotes, but those are not always sourced.

There is generally a photo with each profile, but most are of the posed variety, so this isn’t meant to be a photo book with amazing action shots. Then, some layout artist foolishly decided to ruin the bigger chapter-beginning photos and a few other full-page shots with this ridiculous overlay that I would describe as making them look like a photo seen through the raindrops on your car’s windshield.

In the end, what I see with my experienced eye is a conflict.
On one hand, LaToya Ferguson is a journalist who has written for The AV Club, Paste Magazine, The Guardian, Entertainment Weekly, Variety, IndieWire, and is the managing editor of RondaRousey.com (and Rousey is NOT in the book, by the way, which was a timing thing no doubt). She wanted to deliver quality biographies of mainly current stars.

On the other side are the folks at the publishing house. They wanted something more complete, encyclopedic, and slapped the name on it even if it wasn’t warranted. Then there is its art director, who made a mess of great photos, and, ultimately took some enjoyment away from a good, though misnamed, book.