As a young girl, she watched her dad, Rowdy Roddy Piper, perform in the squared circle and inflict his Scottish rage on his opponents. Often sheltered from the inner workings of the wrestling world, young Teal Piper never really knew what this world was like and didn’t have the urge to get between the ropes and try it for herself. As an adult, that has all changed and now she’s getting a chance to live in her father’s grappling boots except with one catch: there’s no kilt.

The second-generation wrestler will make her professional in-ring debut with Women of Wrestling in Los Angeles, California, this month during its live events. “I’m really excited to just get in there and kind of stir things up a bit,” Piper told SLAM! Wrestling. 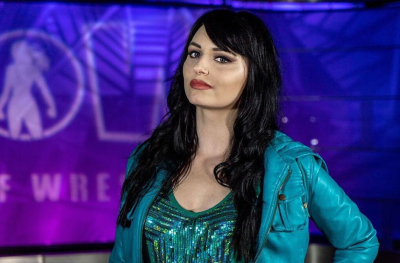 Her bubbly and confident personality emanates when she talks about getting started with WOW, a company with so many women that she looks up to. “Honestly, I don’t think they know what they’re getting themselves into with Teal Piper,” she continued, “I can’t wait to watch the chaos be consumed.”

Piper’s character is really not an act she puts on for show. “Wrestling lets me unleash the thoughts and emotions I really have and not worry about the consequences,” she said with a playful laugh. She’s wild, chaotic and shows a side of herself that she kept buried for so many years.

From her smile to the look she has in her eyes when she talks about her father and wrestling, one would not be able to recognize the unruly girl and that comes within. “I do take after my dad in the ‘Rowdy’ sense, but I also think I’m different from him because Teal Piper is a little broken. It’s fun to put it on other people and make it their problem.”

Another thing she thought was entertaining was her training when she first arrived in Los Angeles and was looking for a place to learn. Although not yet signed with the promotion, she began to work out at the WOW Training Center. Piper said she had no idea how intense it would be.

But then again, no one does until they experience it for themselves. “The first few bumps are hard. I think it’s something where you really have to hate yourself and be find sadistic to enjoy.” She has pain from the bruises, intense training on a regular basis, but said she wouldn’t have it any other way. Piper wants people to know that those welts don’t go away after the first days in the ring. “I’m still covered in them now!” 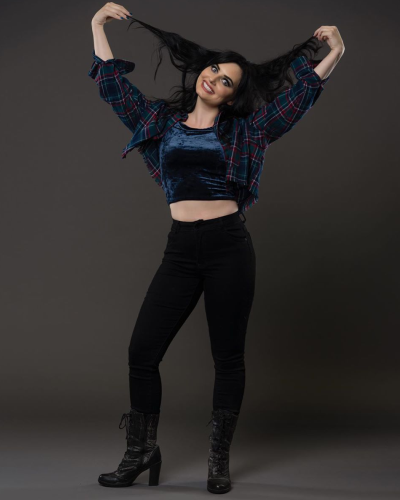 All of the hard work has only just begun to pay off for Piper. This wild child recently participated in the Women’s Battle Royale match at AEW’s All Out pay-per-view. She said the most memorable part of that experience was the sold-out crowd. “Coming out to the ring I got a great pop from the fans which was very sweet. They gave me the same kind of pop they would have given [Roddy Piper].” She revealed that it was almost as if he was with her in spirit. “It’s like I could have turned around and seen him standing behind me.” Piper is still trying to get used to using past tense when referring to her dad, who died in 2015.

After Roddy Piper passed away, she wanted to know and feel everything her father went through while he was a wrestler. She teamed with her brother, Colt — who has fought in mixed-martial arts and as a pro wrestler — on a biography on their father, entitled Rowdy: The Roddy Piper Story (where she’s credited under her full name, Ariel Teal Toombs).

Now that she has firmly presented herself as a professional grappler, she gets why he was so passionate about what he did. “It’s a weird nostalgic thing to be a wrestler. I feel so lucky that some of my dad’s colleagues and friends are there when I call them and ask them for advice,” she said with gratitude.

As far as this sport being physically challenging on your body, Piper said it’s just part of the gig. “The hardship [wrestling] has on your body is just a side effect of having a really cool life and living it to the fullest.” No one who is more passionate about this business could have said it better.

Will there be a new meaning of the Scottish Psychopath? We will find out on September 18th when Piper makes her debut for WOW, which airs on AXS TV. She hopes to make a statement in the same way Roddy Piper did — to entertain and always be remembered.