Luck has nothing to do with Douglas James’ rise

The course of Douglas James’ life, who makes his debut with Major League Wrestling (MLW) on September 7, turned on a $2 scratch ticket.

James’ athletic career did not begin with that fateful purchase, however. His path to professional wrestling was a lifelong journey marked by success in a broad array of sports.

In addition to his involvement in a host of team sports, James was also bitten by the wrestling bug early on in life. A professional wrestling fan since the age of seven, he first took to the amateur mats in the ninth grade.

“I started wrestling in high school. For four years I was on varsity and I ended up becoming the captain of my team in the junior and senior years in New Jersey.”

Amateur wrestling made for a natural transition to Brazilian Jiu Jitsu, kickboxing and mixed martial arts. James pursued them all with rabid intensity.

“I started doing [Brazilian] Jiu Jitsu after high school. Slowly but surely I wanted to fight.”

The descriptor, “slowly but surely” grossly exaggerates the timeframe of his rapid plunge into the combat world. With less than a week of jiu jitsu training, James entered his first tournament. Within just a few months of training, James had his first amateur MMA bout. He also engaged in smokers and sanctioned amateur kickboxing matches. Fortunately, at AMA Fight Club where he trained, there was a host of top talent to guide him along the path, including Jim and Dan Miller, Frankie Edgar, and Charlie Brenneman, all UFC standouts. Always on a quest for knowledge, he also sojourned to Thailand to train in Muay Thai at the famed Fairtex gym.

In 2012, James made his big leap to the west coast. His feet were barely on the ground before he sought out the expertise of one of the most innovate instructors in the grappling business, 10th Planet Jiu Jitsu founder Eddie Bravo. Ultimately, James earned a purple belt under Bravo.

The brilliant, but controversial, Bravo had an impact on James that was to have considerable carry-over as he entered the world of professional wrestling.

“People hate on Eddie, for a variety of reasons, but he’s almost the opposite of what people think. He’s super open minded about different techniques, and even white belts giving critiques on something. That’s his mentality,” said James. “For me, I’ve always looked at professional wrestling like that, too. Just very open minded, whether it’s listening to somebody that’s been doing it for twenty-plus years, or someone that’s brand new, maybe they have an idea that might work. Always open minded, always learning, never satisfied. I think I got that partly from Eddie.”

James’ transition from grappling and MMA to professional wrestling was a fairly quick one. Disappointed with a series of last-minute fight cancellations by opponents, he decided to quit the fight game and channel his energies toward the squared circle: something he had dreamed of doing since childhood.

With his lotto winnings getting him in the door, James took up training with Santino Brothers Wrestling Academy, based outside of Los Angeles, and devoted himself completely to mastering the craft under the guidance of Robby Phoenix, Phoenix Star, and Zokre. While they supplied the technical know-how, Santino Brothers Wrestling School owner and head coach Joey Munoz (kAos) provided the inspiration.

“Joey’s a super positive influence in my life. He’s a positive person. He’s always looking to better himself, to better his school, and for us to better each other,” explained James. “Some wrestling schools, unfortunately, kinda want to keep people in house. There’s a fear of having them branch out. Joe’s kinda the opposite. He’s always pushed us to reach out, to travel, to get out of the school, get out of the area, and I don’t know where I would be without somebody like Joey as an influence on my career and my life.”

Success came early for James, who was awarded SoCal Rookie of the Year in 2015.

Displaying clear talent from the earliest stages of his career, he applied his “always open minded, always learning, never satisfied” mantra toward integrating a wide array of manoeuvres into his technical repertoire. Much of this was made possible by the opportunity to wrestle a variety of experienced opponents from the outset. However, it was some time before he came full circle to his fighting roots.

“It took me a bit to really embrace my background in a way. When I first started I just wanted to be a pro wrestler. I wanted to do pro wrestling things. But we all need to be unique and different in our own ways, and I feel like my background, years of being an athlete and years of doing combat sports, really separates me. I want to use all of these techniques and the things I’ve learned and trained for, for years, to be the fighter that I am.”

Little more than a decade ago, stars such as Rey Mysterio were the rare exception in mainstream professional wrestling, which was dominated by heavyweights. The recent trend on both the independent wrestling circuits and in the bigger promotions toward highlighting the talents of smaller men, as opposed to just the mastodons of the mat, has given athletes like the 5-foot-8, 177-pound James the chance to excel.

James attributes changing tastes to the general cultural shift in attitudes around entertainment, fed by the information and social media revolution.

“[People] want to see excitement. They want to see action. I feel like with the way the world has changed, with social media and the internet, everyone has a short attention span. You have two guys in pro wrestling that are 180 pounds going back and forth, it’s full of action. It’s going to draw attention as opposed to two big dudes hitting each other every couple seconds.” 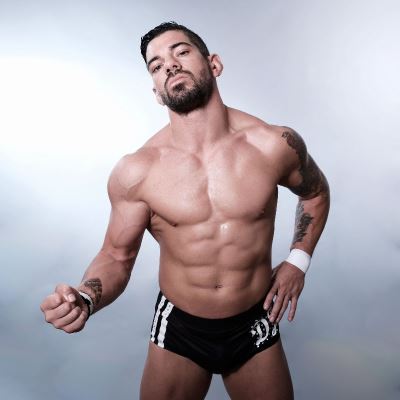 DEFY Wrestling promoter Matt Farmer is a fan of James’, and has him booked for the promotion’s Defyance Forever card on August 23rd in Tacoma, Wash., against Dragon Lee.

“Douglas James is one of those wrestlers who is relentless, in the ring and in training,” said Farmer. “He’s a guy DEFY has been high on for a long time now and we plan to feature him on a regular basis. It’s great seeing him sign with MLW where even more exposure will be shined on him!”

James’ MLW wrestling schedule will take him well beyond his regular SoCal stomping grounds. He welcomes it. “This is what I’ve been wanting to do since I was a little kid. It’s cliché, but I really got into professional wrestling to be one of the best, if not the best.”

James sees MLW’s recent partnership with Pro Wrestling NOAH, in particular, as a huge step in that direction. “I love Japanese wrestling. I’ve never been to Japan, I’ve always wanted to go. I love the culture. [NOAH’s] known for having an incredible Junior Heavyweight division, and I’d love to be able to go and fight some of the best wrestlers from Japan and really prove that I am one of the best wrestlers on the planet.”

As someone who embraces a hard hitting, strong-style approach to the sport, James looks forward to the bite-your-teeth and keep-coming-back-for-more mentality that characterizes Japanese wrestling.

Before the Land of the Rising Sun, though, Douglas James will be heading to the Lone Star State. He makes his MLW debut in Dallas at the NYTEX Sports Centre on September 7.