Stephen Amell is heading back to the ring but for any wrestling promotion.

The Canadian actor known for his roles as Oliver Queen and Green Arrow on CW’s Arrow and as Casey Jones in Teenage Mutant Ninja Turtles: Out of the Shadows will be starring in Heels, an 8-episode fictional series about two brothers running their father’s wrestling promotion in Georgia. 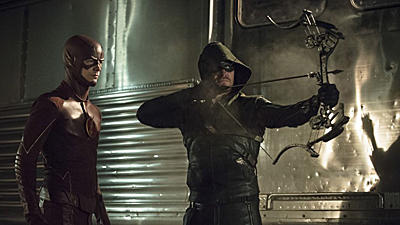 Stephen Amell as Green Arrow (right) and Grant Gustin as The Flash (left) in The Brave and the Bold episode of Arrow. Photo: CW Network.

Amell’s character of Jack Spade is described as “the charismatic villain, or heel, of the Duffy Wrestling Association (DWA). In the real world, he’s its hard-working owner, a husband and father trying to make ends meet while fighting to realize his impossible dreams. He has the mind of an artist in the body of a warrior, and a Steve Jobs-ian need for perfection and for control. He says he’ll do whatever it takes to build the DWA into an empire.”

Set to air on Starz, the drama will be written by Michael Waldron (Community) and directed by Kyle Patrick Alvarez (13 Reasons Why).

Amell is no stranger to the squared circle. He tagged with Neville at SummerSlam 2015 and defeated King Barrett and Stardust. He teamed with Cody, Kenny Omega and the Young Bucks to defeat Christopher Daniels, Flip Gordon, Frankie Kazarian and Scorpio Sky at ROH Survival Of The Fittest 2017 and was defeated by Christopher Daniels at AEW’S All In.