WWE Superstar Titus O’Neil insists his life story is so much more than professional wrestling. For his first book, There’s No Such Thing as a Bad Kid – How I Went from Stereotype to Prototype, instead of going the traditional and expected route of a straight-up wrestling autobiography, he ventured on the path of motivation.

“Wrestling is what I do for a living,” stated the 42-year-old O’Neil, born Thaddeus Bullard, in a phone interview with SLAM! Wrestling. “It’s not who I am for a living. And I think maybe down the line I’ll do something that’s geared towards wrestling, but I think my story, because I play a character on television, it’s completely opposite of the real-life character that I possess. And I think my story is more of a motivating and moving factor than my WWE character is. I can win as many championships as I possibly can and that still won’t help tell my story the way that I can tell my story.”

The book, out now and published by ECW Press, indeed shows another side of the upbeat and gregarious O’Neil that wrestling fans have come to know. The reality of his journey, especially his beginnings, are much darker and bleak. In the book’s first chapter, he shares the revelation that his mother was raped at the age of 11 and that he was “the product of that rape.” 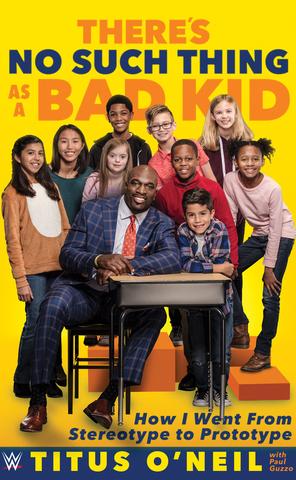 “I should have ended up in a much different and worse situation than I am in today,” O’Neil writes in the first chapter. “At a young age, I was regularly told that I would end up in prison or dead, and for much of my childhood, I was on a path to prove those people right. I fought too much. I screwed around too much. I yelled at adults too much. I didn’t study enough. I was labeled a bad kid by too many people to count. I was living up to those low expectations.”

O’Neil goes on to write about other monumental events that shaped his life like witnessing the drug-related murder of his childhood best friend’s father, being sent away to the Boys Ranch and Academy Prep school for five years when the average stay is 18 months and being “the first person in my immediate family to go to college.” O’Neil doesn’t sugar-coat anything nor shy away from laying down some tough love and he craftly juxtapositions the serious subject matter with his trademark humor. In the book’s fourth chapter, he even references his hilarious and infamous slide under the ring while entering the Greatest Royal Rumble on April 17, 2018 in Jeddah, Saudi Arabia.

“I don’t take myself too seriously,” he wrote about the show stealing “Titus World Slide” incident. “You play a superhero on TV, but in real life you are still just human, and humans make mistakes. You need to laugh at your mistakes rather than harp on them. If you get up with confidence, no one else will harp on it either.”
Now readers and wrestling fans who are familiar with the 6 foot 6, 270-pound O’Neil, may be disappointed that the book doesn’t focus entirely on wrestling. Some will also go into the book already knowing full well that his story is going to have a positive outcome. For this reader, my only criticism is that each chapter doesn’t have titles, they are merely labeled as Chapter 1, Chapter 2 etc. Having chapter titles would have reflected each chapter’s overall theme more effectively and thus resulted in the advice O’Neil relays having more focus and structure. But none of these factors diminish the remarkable story O’Neil has to tell about the obstacles and labels he’s had to overcome.

“I am a man who played football for and then graduated from the University of Florida,” writes O’Neil in the first chapter. “I am a man who went from troubled kid from the projects to elected vice president of that university’s student body. I am a man who every year makes sure that thousands of Tampa Bay area’s underprivileged kids wake up to presents under their Christmas tree and receive backpacks, lunch boxes, and classroom supplies before the school year. I am a man who relishes my job as a father and role model to two sons.”

He continued, “I am a man who proves that how you are labeled as a child does not have to define who you will become as an adult. I am a man who lives every day as proof that there is no such thing as a bad kid.”

The book also serves as a practical guidebook for those going through similar life circumstances, those individuals who currently mentor children and those who would like to mentor/help children, but don’t know where to start. For the latter, O’Neil has two words of advice: “Start anywhere!”

“I say follow your passion first and foremost and if you don’t know what you are passionate about, that’s fine,” O’Neil pointed out. “Find a cause. You can literally start anywhere and I’m sure you’ll never be turned away when it comes to helping people.”

He also advises anyone reading his book to of course stop putting labels on kids and take the time to look closer.

He continued, “Some of these kids are not eating at night when they go home. You know some of these kids don’t have the means to get uniforms and things like that, that are required at some of these schools. Once you start looking at the factors that coincide with why these kids are not learning. The kids might be hungry or the kid might be acting out because he’s getting bullied. You just can’t label these kids as bad kids!”Despite a busy WWE schedule, O’Neil, a resident of Tampa, Florida, still prioritizes his values. According to the Tampa Bay Times, he makes weekly visits to some local elementary schools including the Sligh Middle Magnet School. In fact, O’Neil mentions that he is walking across the school’s campus during this phone interview. In his book, O’Neil reveals that “his ultimate goal is to create my own school that embraces the lessons I have learned from the Boys Ranch and Academy Prep.” And while this goal hasn’t officially come to fruition, O’Neil says he has been creating “his own version of what I want school to be” at this location. According to O’Neil, the school is “in one of the most under-served areas in Tampa,” and his goals include, but are not limited to, a fitness center for teachers, a prosperity center that will offer a variety of services for parents and a culinary space to provide 500-1000 families a week with take-home meals.

O’Neil also eyes a second foray into the literary world, this time with his mother as a co-author.

“She’s got a hell of a story as well,” he expressed. “Out of the four kids that she had, three of them went to college, graduated from college and she never had to pay one dime of our college tuition, we all went on scholarship. None of us have ever been in jail, locked up or on drugs. So, she did damn good.”