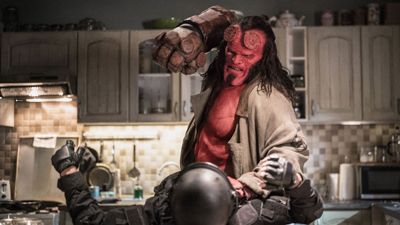 Comic book and movie anti-hero Hellboy is lacing up his wrestling boots for All Japan Pro Wrestling.

Coinciding with the movie release there, “Hellboy” (notice the quotes) will be teaming with Jake Lee and Atsushi Iwamoto to battle Takao Omori, Black Menso~Re and Omori Hokuto at the 2019 Summer Explosion in Korakuen Hall on September 3rd.

Sadly, All Japan Pro Wrestling has stated this will be Hellboy’s first and last appearance for the promotion.

The movie, starring Stranger Things’ David Harbour in the title role, made approximately $42 million overall. Its production budget was $50 million. It was released on Blu-ray on July 23.

The movie itself opens with Hellboy battling a vampire in a wrestling ring.