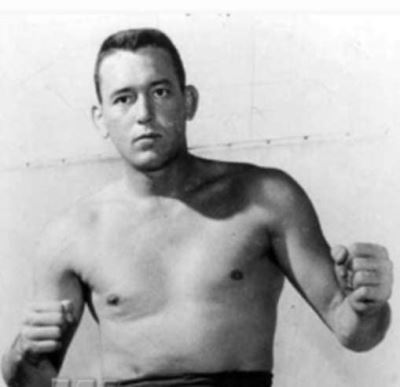 One of the greatest babyfaces in the history of Tennessee wrestling, Eddie Marlin, died today, just days after his 89th birthday. He was one of the few to say that he sold out the Mid-South Coliseum in Memphis — and in the match, he and Al Greene essentially worked a front facelock for 55 minutes.

Marlin described the sellout bout a few years back on an podcast of Booking Memphis Wrestling with Jerry Jarrett.

“I was in there with Al and and Al got a front facelock on me, and somehow, one way or another, when he did, I bit my lip and it started bleeding, bleeding pretty good. And the people thought that from that front facelock that it was coming from my throat — and I mean, them people, they really, really got feeling sorry for me,” recalled Marlin. “And we worked that front facelock, it seemed like forever, because the people just kept standing and standing and standing, and finally he backed me into the corner, and when he stepped back, I fell down and that was our call then, a small package, or jackknife, and I pinned him one, two three, and that Coliseum went wild along with me.”

Jarrett, who was Marlin’s son-in-law, raved about the bout. “Eddie and Al were so good that they worked one hold for about 55 minutes. I was afraid the time limit was going to run out on them because we set it up that Al would give Eddie a pretty good beating and Eddie would sneak a win in. It was just an amazing match to me, that somebody could keep the fans’ interest for 55 minutes, with one hold. It was amazing.”

It worked because the fans believed in Marlin, who was not huge, at roughly 6-foot, 200 pounds, and wasn’t in especially awe-inspiring shape.

“Eddie was a really, really good babyface. The fans loved him and took to him, whatever situation you put him in,” said Jarrett. And there was little ego there either, even if Billy Spears once spray-painted “Big Shot” on Marlin’s car.

Eddie B. Marlin, Jr., was born August 13, 1930, to Eddie and Annie Mae Marlin, in Nashville. His siblings included sisters Anna and Peggy, and a brother, Thomas, who also got into the wrestling business.

In a 1979 interview in the TNT Power newsletter published by Terry Justice, Marlin recalled breaking into the business in the early 1950s.

“The way I got started, I was working in Nashville and met some wrestlers at the ‘Y’ and worked out with them. One night [promoter[ Nick Gulas was running a spot show in Alabama and one of the wrestlers didn’t show up, so I took his place. I had been going to matches all my life,” he explained. 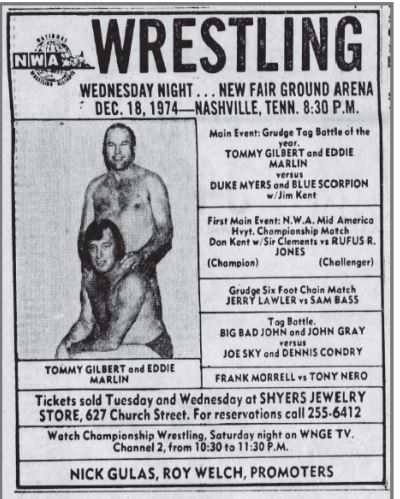 A clipping from Nashville in Dec 1974.

The legendary Jackie Fargo saw something in Marlin. Early in his career, Marlin lost to Fargo, and Fargo called promoter Nick Gulas and said, “Eddie’s a pretty good hand. Why don’t you help him out some?”

Much of Marlin’s success came in tag teams, and he won belts in Arkansas and Kentucky, as well as his home state.

“We were together one night and the promoter liked what he saw. When we teamed up, we wrestled everywhere together,” Marlin told Justice. “I think in a way, we’re a lot alike. Neither one of us when we first teamed up was what you’d call a top notch wrestler. We grew up together.”

On the podcast with Jarrett and Randy Hales, Marlin said that Gilbert could be moody, that he didn’t always talk a lot on some days, and other days he’d be chatty — “the same Tommy Gilbert, with two sides to the story. He was a great partner.” 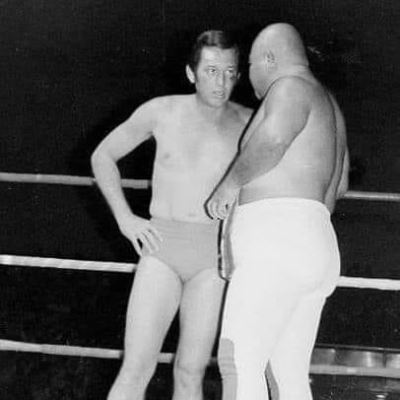 Marlin also praised another championship tag team partner, Tojo Yamamoto during his babyface run. Yamamoto was especially helpful, as he’d drive and let Marlin sleep, “he had me a pillow and a blanket back there.”

In part, Marlin needed the rest from his many different jobs. He was wrestling and working at a rubber factory when Jarrett, who’d asked for and received permission to marry Deborah Marlin, offered him a chance to work in the Tennessee, office. Jarrett sold him the promotional rights to Jonesboro, Arkansas, and his involvement in the office grew from there.

So did the family.

It’s fair to say that with the Marlins, the Jarretts and Gilberts are teamed in some capacity, the result was a dynasty. It extended beyond Jarrett’s son, former world champion Jeff Jarrett, to others they influenced.

One was Tommy Richardson, whose family knew Marlin. He’d get into the wrestling business as “Wildfire” Tommy Rich. Another was Hales, who would take over promoting in Tennessee after Jarrett closed shop. “Eddie Marlin’s the reason I got involved in the wrestling business,” said Hales on the podcast. He recalled approaching Marlin about helping him sell photos. They agreed to a deal, and Hales peddled 8×10″ black and white photos of Marlin for 50 cents, and Hales got 10 per cent, so a nickel a photo. 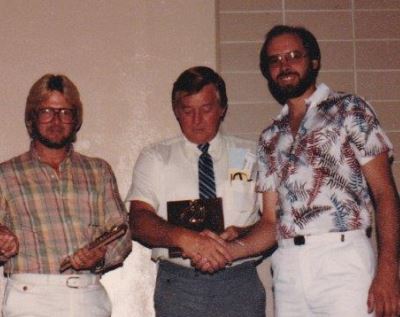 Marlin’s role in the office — “He was my right hand every day since he joined our company,” said Jarrett — was echoed on television, where he was the figurehead promoter on Memphis television in the 1980s and early ’90s, often getting punched by a heel.

“Eddie was blessed by being a great babyface seller,” said Jarrett on his podcast. “So if we needed to get a heel over, Eddie was acting promoter, so Eddie would come out there. All the heel had to do was Sunday punch Eddie and go after him, and they had instant heat. We just went back to that well as often as we could.”

Jarrett also said that he used Marlin to deliver bad news. “Eddie was known as the hatchet man. Eddie was a tough son of a gun and when it was time to tell a wrestler goodbye, Eddie was the hammer that told them we gotta make a change.”

Another task was sometimes driving the ring truck. In May 1993, he got lucky, surviving a truck accident, driving from Jonesboro, Arkansas, back to Nashville. The Wrestling Observer Newsletter described the accident, which had Jeff Jarrett in the vehicle as well: “Apparently Marlin fell asleep at the wheel while driving the ring truck. Both the truck and ring were destroyed in the accident. Marlin and Jarrett were both hurt, although at press time we’ve heard conflicting reports on their condition. Jarrett is expected to be out of action this week, but other reports indicate it could be longer than that. The accident occurred apparently just a few miles away from the accident site on the same I-40 where manager Sam Bass was killed in the mid-70s.”

Away from the ring, Marlin liked to fish, hunt, and work on the farm.

He was double-tough too, and a few online noted that with the passing of Harley Race earlier this month that Marlin was the toughest left. How tough? Here’s a tweet from Jerry Jarrett on Aug 8, 2019: “I just got the following text from Randy Hales who was with Eddie when the doctor came in. ‘Doctor told him he had lung failure, kidney failure and heart failure and he made it through it.’ Now that is what tough is all about.” 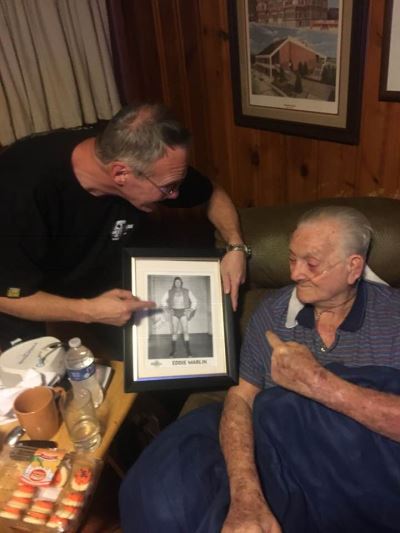 Jarrett grew up without a father, and when he married Debbie, Eddie “became really the only family figure I ever knew.”

“Eddie Marlin taught me how to be a good father-in-law,” explained Jarrett, saying that Eddie never interfered or expressed an opinion about their family. He also witnessed as Eddie took care of his wife Norma, bedridden for nearly a decade. Each night, Eddie would sleep in a chair beside her bed.

For the last few years, Marlin and Hales lived together, meaning that Marlin was still involved in the wrestling business, helping Hales with merchandise sales or spinning tales on podcasts.

Hales announced the news late on August 15. “I’m said to say Eddie Marlin passed away at 5am this morning. I waited to all the family were told until I made this post,” wrote Hales on Twitter.