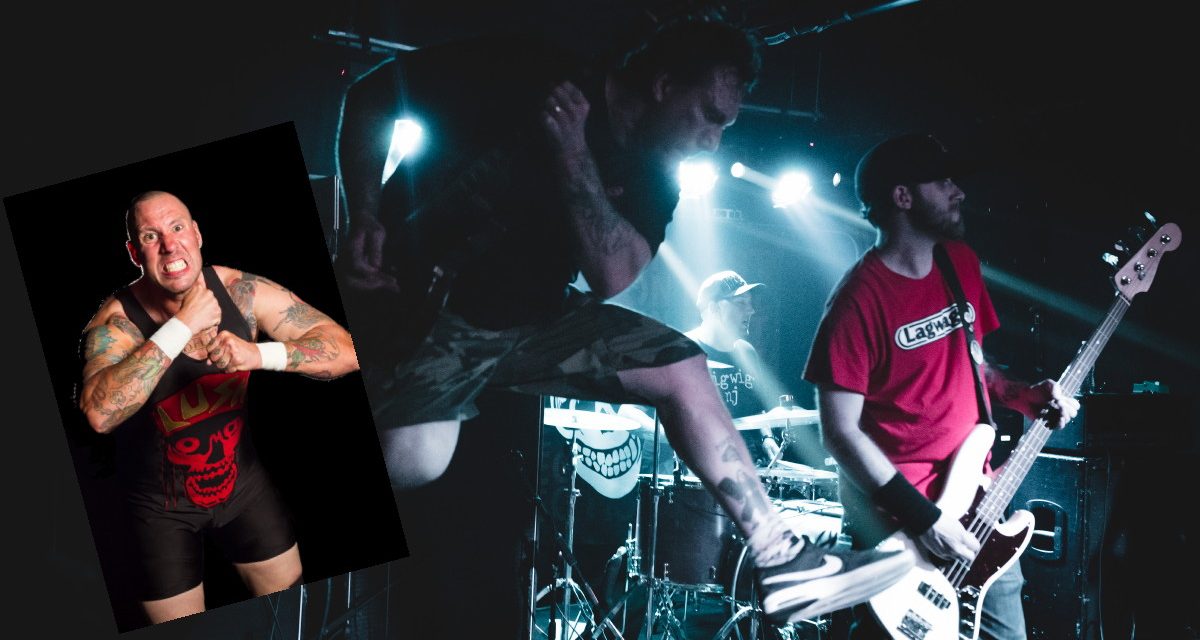 The similarities between punk rock and independent pro wrestling have become increasingly apparent to those who have taken part in both. Be it the counterculture aspect of each scene or the do-it-yourself approach to marketing T-shirts or other merchandise, punk and wrestling travel down many of the same roads.

Kenny Lush has toured the world as both a wrestler and with the punk band, Daggermouth.

He wrestled primarily with the British Columbia based promotions, All-Star Wrestling and Extreme Canadian Championship Wrestling, though he’s done tours of Japan, Korea, and more. At 6-foot-2 and 260 pounds, he sticks out on stage or in a ring.

Lush has wrestled a who’s who of top Canadian talent over the years, including names like Kyle O’Reilly, El Phantasmo, and Davey Boy Smith Jr.

Now, however, Lush is focused on his new band, Rest Easy, and the EP they just released, Sick Day. 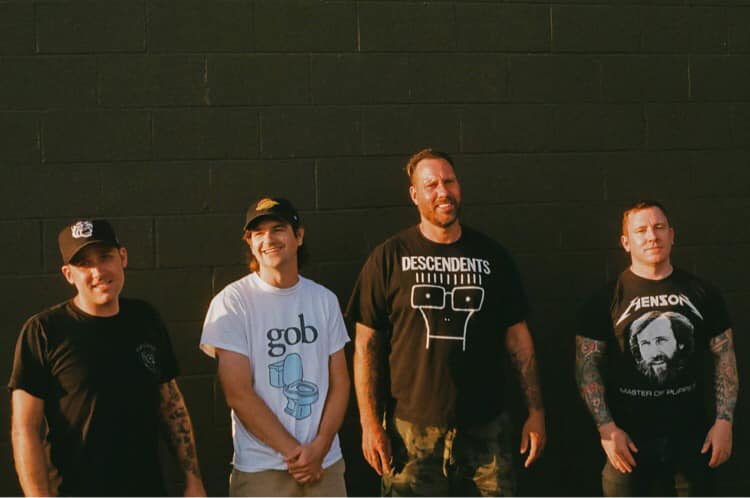 When it comes to punk rock and pro wrestling, Lush says the hustle is identical.

“Since I’ve done both, I can honestly say being in a band or an indy wrestler is basically the same,” he told SlamWrestling.net. “You gotta hustle to line up bookings, or tours. Both usually involve long drives and once you get to a venue it’s all about finding the best spots for your merch to sell.”

Both independent wrestlers and punk musicians have to work to get their name out there and according to Lush, everyone in both scenes wants to go to Japan.

“You have to constantly stay busy on social media, etcetera, to make sure people know who you are,” he explained. “And whether you’re in a band or a wrestler Japan will always be the best place to tour!”

At some point in the last decade or so, independent wrestling developed the same DIY attitude that often defines the punk scene. Wrestlers began working their own merchandise tables, designing and selling their own T-shirts and more. Much like punk rock doesn’t need major record labels, the stars of the independent scene didn’t need Vince McMahon’s machine for them to reach an audience, if they work at it.

Cody Rhodes said as much in an AEW media call in early March, referring to hunting down new talent for the new company. “We started with a lot of unknown people, or a lot of people who had like a punk rock following where everyone told you about how great they were, but you really never heard of them or seen them.”

More than that, however, independent wrestling, to some fans, has a similar feel to a punk rock show. In punk and wrestling, there is a stronger connection between fan and performer. There is also less distance placed between them. A fan of an independent wrestler can walk up to that wrestler’s merch table after the show or at intermission, buy some merch and greet them. Something like that isn’t happening at a WWE event or a Rolling Stones concert but it would at a Daggermouth or Rest Easy show.

“I think when you go to a punk show or an indy wrestling show it’s chaos but like a controlled fun chaos,” Lush said. “I think both have such a fun aspect to them. I remember going to a punk show when I was a kid and being blown away that you can just meet the band afterward. The same goes with wrestling. you can easily stick around after the show and meet your favorite wrestler.”

Each scene tends to attract the social outcast type as well, or those who feel their particular interests are rejected by “the cool kids” or the mainstream at large. A punk show or a wrestling event can be a safe haven for these fans who find solace in one or both scenes. They might feel as though they don’t fit in with others at school or work but they do here. 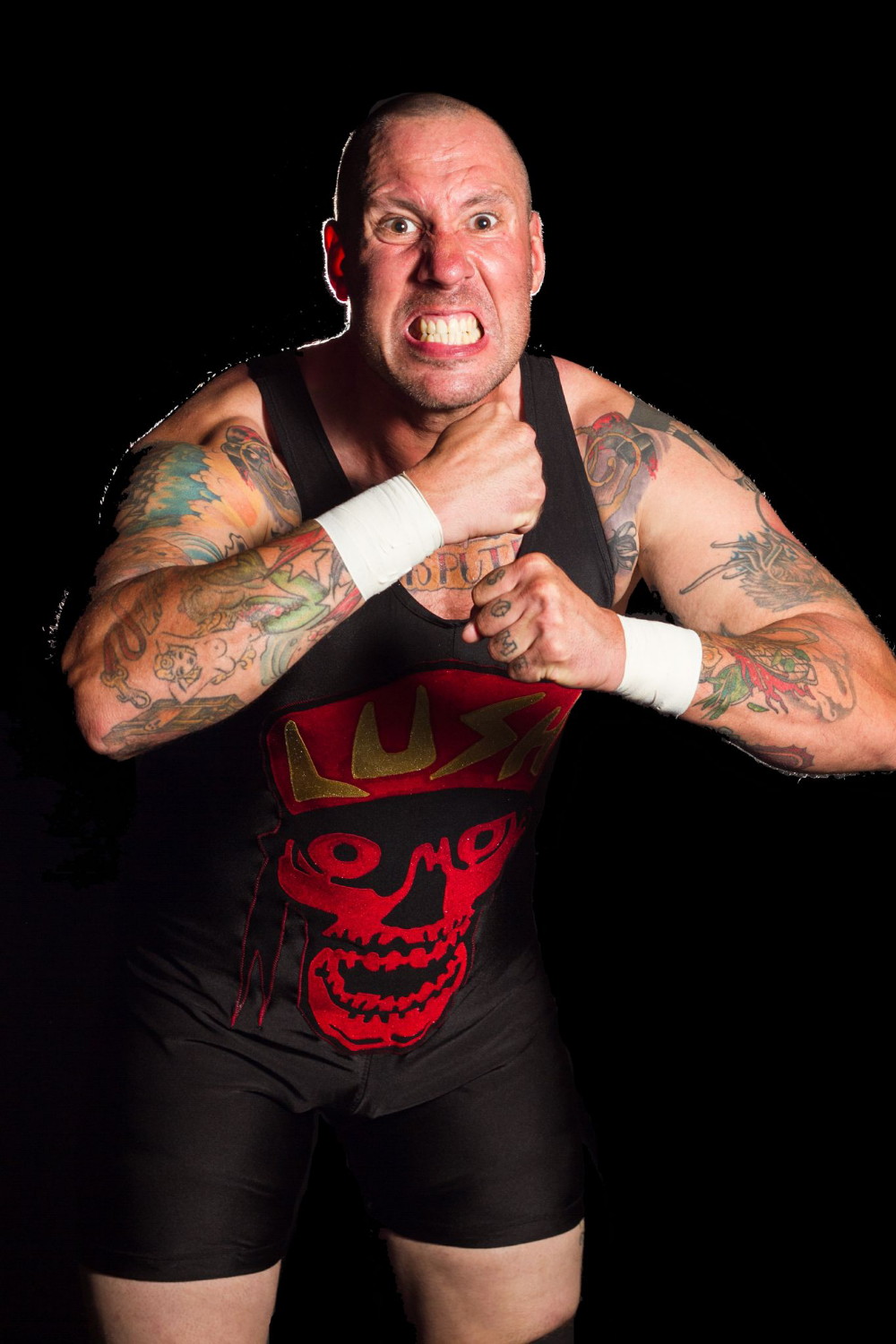 Crossover Between Punks and Wrestling Fans

While aspects of the punk scene have trickled over into wrestling in recent years, there has also been a growing number of people attracted to both art forms. There is something about wrestling and something about punk, where if you like one of them, you are arguably more likely than the average person to be into the other as well. It’s likely this is due to the counterculture/DIY aspect present in both scenes but the amount of punk fans that become wrestlers is another factor.

CM Punk’s rise to stardom cannot be understated here. The amount of wrestling fans he introduced to the punk scene is not something easily calculable, but is no doubt significant. It’s likely he’s also been responsible for introducing many fans of punk rock to pro wrestling as well. CM Punk brought an entirely genuine punk rock attitude to wrestling too, which no doubt helped. It was clear to see that this was not a guy pretending to be something he wasn’t — being Straight Edge was not a gimmick. People from the punk scene would have seen right through anything else.

Today, there is no shortage of wrestlers who, while it might not be their gimmick, are noticeably punk influenced. Names like Brodie Lee, Ruby Riott, Matt Cross, and Reno Scum just to name a few but there are many others.

Lush says he noticed a stark difference in the punk scene’s attitude to pro-wrestling between 2008, when Daggermouth initially broke up, and in 2018 when the band reunited. At some point over that 10 years, wrestling had become more popular within the punk scene.

“In 2008, I remember being on tour and you wouldn’t find a lot of people into wrestling,” Lush said. “Nowadays you go to a concert somewhere and you’ll for sure see at least a few people wearing wrestling shirts. I think the over the past 10 years seeing the indy wrestling scene explode reminds me a lot of the mid ’90s punk explosion. With WWE and NXT acting like the major label trying to sign every indy worker they can.”

There are even full promotions dedicated to the crossover between punk and wrestling now. The British promotion, Pro Wrestling EVE, is made for the punk feminist wrestling fans out there. There’s also the Punk Pro-Wrestling (PPW) promotion out of Florida.

Lush’s experience indicates a link between punk and wrestling has grown over the last 10-15 years, one born out of attitudes that transcend either art form. It’s a punk rock attitude that makes punk music sound the way it does, and it’s similar in wrestling. There’s likely much more still the two scenes can each learn from one another. Only time will tell how deep the connection between the two scenes can become. 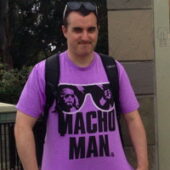 The first wrestling event Ian Carey attended was headlined by Owen Hart facing Makhan Singh in Stampede Wrestling. Those Karachi Vice guys sure were devious. As a kid, Ian moved to Toronto and began attending shows at Maple Leaf Gardens and the bigger events at SkyDome. His twin passions of wrestling and writing finally come together.