WWE history made with Evolution

Win or lose, every woman was a winner tonight. Tonight wasn’t about a main event but something that goes far beyond the squared circle.

WWE Evolution makes history and breaks the glass ceiling by hosting many prominent athletes from the past, the present and maybe even the future.

This is not only a milestone for women in wrestling but for all women in sports. This is proof that the impossible is possible to achieve and women have no limits. Evolution also showcased how women and their image in sport have grown over the years. This is a terrific advancement in my opinion, a change the WWE definitely needed. The image that this company should be portraying is that of strength and power no matter what your background is. Sadly, the WWE slipped into their old way just a bit with the women’s battle royal tonight.

One thing I don’t understand all too well is why the WWE decided to bring back women that really shouldn’t be there. I do not believe that the Attitude Era is a proper depiction of what women’s wrestling really is. When I look back at some of those matches, the women were basically parading around in bikinis like Kelly Kelly. Personally, I think they could have brought out more talented wrestlers, like those we see in NXT. Some that come to mind are the sassy Bianca Belair (Who’s un-de-fea-ted if you didn’t already know!) and Candice LeRae. I watch them every week and I am impressed with how the NXT women’s roster is progressing. They are the wrestlers of tomorrow and should definitely be showcased more. This was a miss by the WWE if you ask me.

One of the most notable matches of the night was the grueling bout between Charlotte Flair and Becky Lynch. Seeing those women go almost a half hour performing what looked like a TLC match is just incredible. A match like that takes a lot of creativity, power and thick skin. They pushed through till the end and both were truly inspiring. 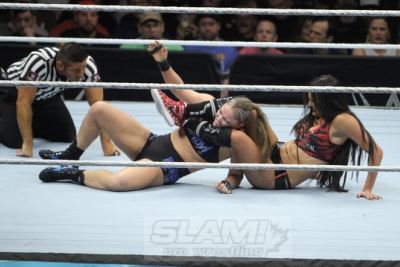 I felt that it was a little lacking towards the end of the event. Nikki Bella and Ronda Rousey had some entertaining moments but overall it was lackluster. It was not a long match and it didn’t have the spunk and the intense feeling that a main event usually has. It would have been more of a show if the two last matches had switched places. I think it would have made the crowd that much more excited and would have been a great way to end a pay-per-view that demonstrates women’s wrestling. Overall, not a bad event but I think there’s room for improvement and I can’t wait to see what they do for the next one. Yes, I am anticipating another all women’s show!

I did like that all of the women came back out for the crowd. It shows true loyalty and respect to their fans, the ones who come to the episodes every week to support them. I hope that in the years to come we will see more events like this one. Shows that put on entertaining performances and show the world what women are made of: Anything but sugar and spice and everything nice. 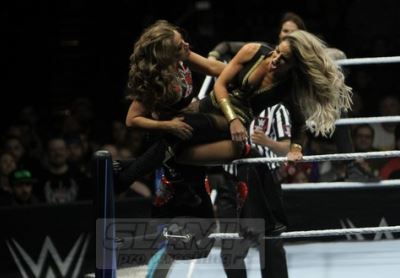 Alexa Bliss coming out a starting drama was to be expected. Lita and Trish Stratus were clearly the favourites with the crowd chanting “Lita!” to open the match. Alicia tags in Mickie James, who faces Stratus and giving us all the goosebumps. And of course, Bliss tired to get her squad to walk out of the ring but there’s no way their legendary opponents were going to let that happen. It’s not surprising that the two veterans of the Attitude Era were able to compete, it’s otherwise admiring. Arguably, we could be watching the WWE’s past, present and future in this very bout. After a Lita Sault onto Fox and James, Stratus pins James for the win. An average opening match, but I am hoping they get better going forward. A bar has to be set, right?

Winners: Lita and Trish Stratus by pinfall at 13:08 mins. 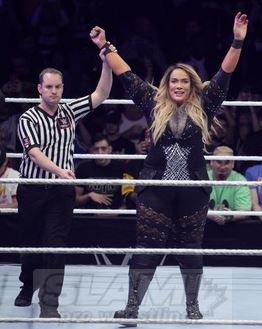 Nia Jax is the winner of the Women’s Battle Royal. Photo by George Tahinos

I know it’s a pay-per-view and there has to be a time limit to these matches but it’s not a real battle royal match if they bring all the women out at the same time. The Iconics are eliminated first but I guess that’s what you get for talking smack in a ring full of vicious women. Mandy Rose and Sonya Deville team up, as usual, and eliminate a few and then Rose turns on her long-time friend and takes out Deville, who was just hanging from the ropes. Asuka asking for help from Naomi to take on the irresistible force, Nia Jax, which ended in a eight-woman superplex and leaving all women flat on the mat. I was pleased to see that there were very few of the past wrestlers still in the ring by the end. There’s too much talent on the current roster not to showcase it. Jax’s strategy was keeping your friends close and your enemies closer, which clearly worked. When the former champion came face to face with Ember Moon, she used her strength to her advantage and threw Moon over the top rope for the win. Not surprising but should be interesting to see what angle will follow. 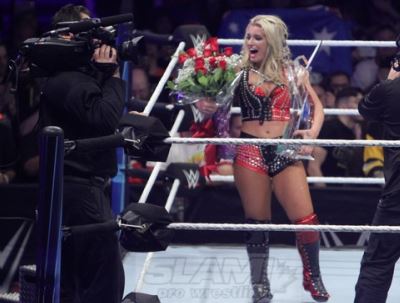 Toni Storm is the winner of 2018 Mae Young Classic. Photo by George Tahinos

Both of these women had to opportunity to watch and observe how to prepare for this match. As soon as the bell rang both Io Shirai and Toni Storm wasted no time in trying to wear each other down. Shirai was able to get Storm into a headlock and got herself up to the top rope and threw herself off the top rope for a perfect Moonsault onto the outskirts of the ring. Each wrestler here truly represents the ideal image of the women’s evolution. Hard work, talent, perseverance and win-at-all cost attitude are a few attributes of what this sport thrives on. This is, however, what we saw throughout the 2018 Mae Young Classic. The pace of this match was consistent, each grappler getting in power kicks and holds. In the end, Storm brought the hurricane to Long Island and takes the win with a Storm Zero, winning by pinfall. Well, fought and well deserved for the young Australian. 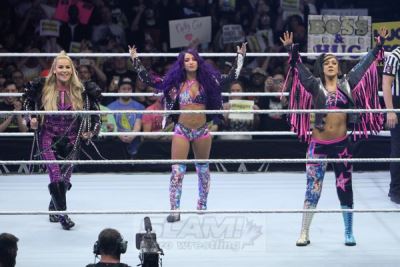 I don’t think we could have expected too much from the Riott Squad. Every week on Monday Night Raw they basically do the same thing: attack their opponents even when not tagged into the match. It was more entertaining when Sasha Banks jumped into the ring, she’s got so much fire and energy and a joy to watch. But of course, the Riott Squad managed to turn it into a three-on-one and drove Banks into the barricade. After a few attempts at stealing a win, the Riott Squad got upset and start to wear themselves down. The trio of main rosters vets find their energy and take the win. Another average match, probably just to fill in some time.

Winners: The team of Natalya, Bayley and Sasha Banks win by pinfall at 13:24. 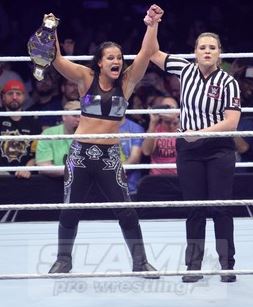 There’s so much hostility between these two because of the rivalry they built up in NXT. Shayna Baszler used many submissions to try and wear down Kairi Sane. This was a smart move on Baszler’s part, keeping her down as much as she could and causing a good amount of damage to Sane’s arm. Kairi Sane’s has a great never-give-up attitude and pushed through everything that was thrown at her. Sane even got into a scuff with Jessamyn Duke and Marina Shafir, who were both sitting in the front row and interfered in the match. Duke kicked Sane in the head which then led to Baszler putting Sane in a kirifuda clutch, which made the champ pass out. 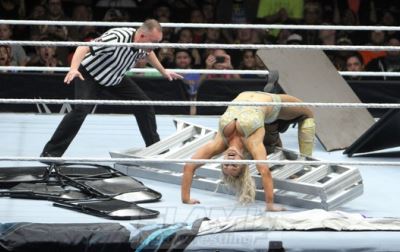 With the help of a ladder, Charlotte puts Becky in a Figure Eight. Photo by George Tahinos

Charlotte Flair called Becky Lynch to come over and fight and she did, with anger. It’s confusing how Lynch can carry around that huge chip on her shoulder when she’s the champion. She should that and took it out on Flair, hitting her with anything and everything she could find. Now that you’ve got the belt you’ve been waiting for your entire career, wear it with pride, not like the world owes you something. The Irish lass was in control most of the bout but Flair managed to get herself up and throw Lynch for a suplex on the mess of chair in the middle of the ring. It was a little disappointing that Flair missed the jump onto the table the first time, could have cemented her the win. Lynch tried tapping out with that Figure Eight in the ladder. Lynch attempting to leave with the belt was completely disrespectful but Flair caught her and began her assault. Even a fan thought so, screaming…Why did you run away then, Becky? Flair is nothing less than a warrior queen and after this match there is no reason why she shouldn’t be the new Smackdown Women’s Champion. Unfortunately for Flair, she couldn’t not make it to her feet in time after she was thrown into a table. Lynch was left the last woman standing. 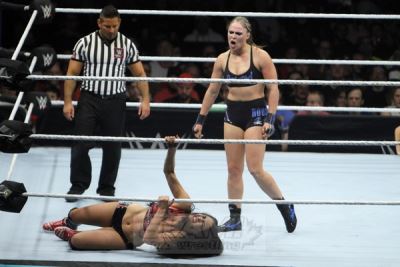 Nikki Bella is all about the trash talk but it’s going to be tough against an opponent like Ronda Rousey. It was smart of Nikki to keep a quick pace, leaving little room for error.

Of course, Brie Bella tries to cause interference, something we have all seen before. Rousey is a high performing athlete and if she wanted, she could take both Bella twins. And just like that, the champ got both Bella on her back and whipped them to the mat like it was nothing.

As Rousey found her energy, Michael Cole said, “This is vintage Rousey.” Is it really vintage if she’s been there less than a year? I don’t think so. Nikki Bella tried a few times to put Rousey away but after each failed attempt she threw a temper tantrum. I found it to be an incredibly short match, lasting just under fifteen minutes. For a final event it definitely could have been longer. Why hype up a match when it’s only slightly above average?