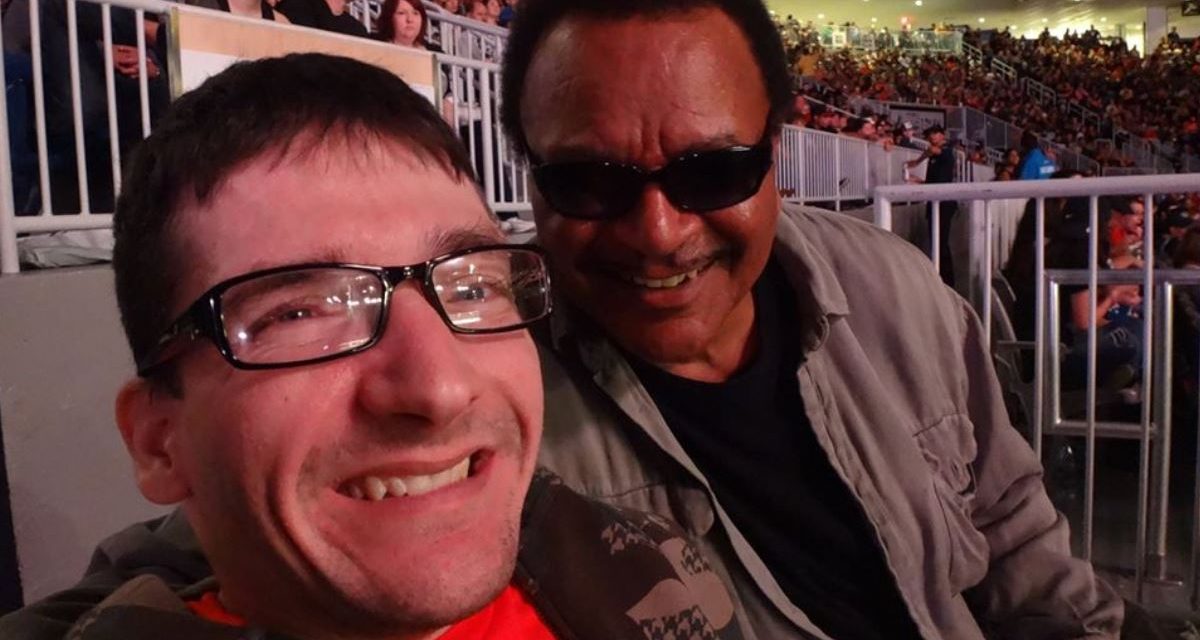 As horrible as it was Sunday, October 28, 2018, to be there as my friend Tor Lariviere died in the hospital, I am going to treasure our friendship. It came about by accident and ended up with my buddy becoming one of the best-known pro wrestling fans in all of Ontario, who was also called upon as the bell ringer at countless shows.

So let me tell you a bit more about Tor Hart, as most of you knew him. 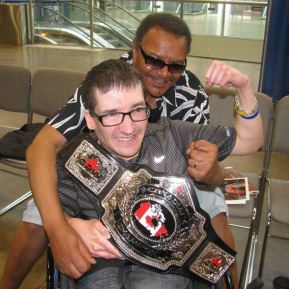 For one, that wasn’t his real name. It was actually Tory Lariviere, but no one ever called him Torry.

Suffering from Spina bifida, he was confined to a wheelchair for his entire life. I can’t imagine what his parents, Shari and Kit, and his brother, Ty, went through in the early years, since I only met Tor in 2011.

But man, what a seven years.

My wife, Jeannie and I were on a bus tour of the Thousand Islands, near Kingston, Ontario. We met Shari and Kit over breakfast at the hotel where we were all staying. It was a nice chat, and I was out the door to get on the bus when Jeannie called me back. Shari asked me to sign an autograph for their son, Tor. It came out of the blue, since we hadn’t talked about pro wrestling at breakfast.

When she said her son was disabled, it caught my attention. When Shari told me that Tor had never been to a pro wrestling show, and didn’t know how to go about finding local shows, I offered her up my phone number. Honestly, I didn’t think they’d call.

A few days later, Shari called, and we became Facebook friends too. When a local indy came up, I let them know and they were game. They drove in from Ajax, east of Toronto, to my Scarborough home.

This was my first chance to get to know Tor. With his raspy voice, you were forced to move in close to him to hear him. He was diminutive, in his wheelchair, but had a sparkle in his eye and a joie de vivre that I wish more people had. That joy of living only increased. At the indy show — wish I could remember who ran it — I introduced him around. They all made a fuss over him.

It only grew from there, and really, really grew. 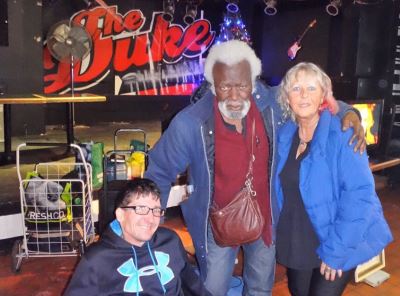 Tor and his mother Shari after karaoke at the Duke with Sweet Daddy Siki.

Chances are you met Tor if you went to wrestling shows or conventions in Toronto and southern Ontario. I took him to an oldtimer luncheon in Hamilton, and to karaoke at the Duke with the host, my own wrestling and life mentor Sweet Daddy Siki. He and his mom would be easy to find at the Ricoh Coliseum or the Air Canada Centre in the designated wheelchair spots, and friends young and old would make the pilgrimage to say hi. When I could, I’d get him backstage at shows. All the while, Shari would be taking photos of Tor with, well, everyone. Triple H circulated a photo of him and Tor from the recent Toronto Fan Expo.

Shari, my favourite “cowgirl” who loves to ride horses, would get Tor to Florida yearly, where he was a competitive bocce ball player in the Special Olympics. That’s underselling it, actually. He was a champion bocce ball player, whereas I can barely bowl.

In Florida, they would go to shows too, and friendships forged on the Ontario indy scene paid off when grads, like NXT/WWE referee Darryl Sharma (Hornet when he wrestled) began working there. (Another pal in wrestling was Tariq Ghani, as they’d gone to school together at J. Clarke Richardson Collegiate in Ajax.)

But Tor was way more than just another wrestling fan to me. Early in our relationship, he asked Jeannie whether he could call her Aunt Jeannie, and me Uncle Ricky; of course, she said yes.

I had a big part in Tor getting his own place too. Shari and I were talking one day, and I suggested it was time he move out. He wasn’t a teenager any longer. Naturally, she had a really hard time thinking that he could be independent. I said, “Why don’t we give him a chance? If he can’t, the worst thing that could happen is that you go get him and bring him back home. Let him try it.” Five years later, he was still living at his own place. 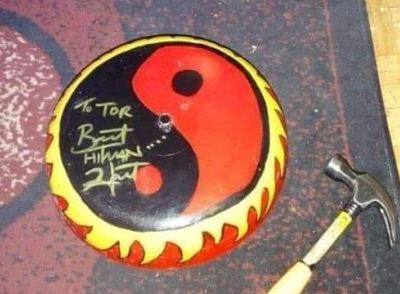 But you might have thought you were in a wrestling museum. He had pictures everywhere, belts and memorabilia. And his precious ring bell, autographed by Bret “Hitman” Hart.

Tor took on the surname “Hart” on social media and at shows because of his love of the Hart family, especially Mike Hart, one of Smith Hart’s sons who lived locally for years. Everyone loved Tor, wrestlers, fans, promoters, but there was a special place in Mike’s heart for Tor. God bless them both.

Life has been full of challenges for Tor; just a couple of years ago, he got a viral infection while in Florida and nearly died, being flown back to Ontario by a medical plane.

Yet, in all the years I hung around him, I never heard him complain about anything. Wait, he’d complain if I bugged him too much, and he’d tell me to fuck off. But he’d never complain about himself.

I will not take the blame on being a bad influence on him either. It was his idea a few years back to go into the Brass Rail strip joint on Yonge Street in downtown Toronto, not mine. I wheeled him up to the front row where the view was better. The price of beers, however, was an issue. After we both bought a round — yes, you heard that right, I bought Tor a round! — we were running low on cash. He called his mom, who was out shopping with my wife. After killing themselves laughing, Shari met me at the front door with some cash for us to continue.

Over the past year, a special angel came into Tor’s life in the form of Kate, his girlfriend. My heart aches over lost young love too.

Just as wrestling was my life, it became Tor’s too.

A week or so ago, Shari found Tor in his place finding it really hard to catch his breath. Things spiraled from there, and his body shut down. With next to no brain activity left, the impossible decision to remove him from life support was made by the family. That end came on Sunday, and as gut-wrenching as it was to be there, I was glad to be there with Jeannie to say goodbye to my buddy, and to support his family.

We talked a bit in the hospital, Scarborough’s Rouge Valley Centenary, about what wrestling came to mean to Tor.

Shari told me that I helped get Tor out of a shell. He wouldn’t talk to many people, he never went anywhere until pro wrestling came into his life. She told me, “Wrestling changed his whole life. That’s all he talked about.”

Tor’s brother, Ty, told me the same thing: “He met so many wonderful people.”

In the coming days, more tough decisions will come to pass, including where Tor, who was only 34, will have his eternal resting place, and details about a Celebration of Life — no somber funeral for my buddy. There will be plenty of laughs, good times, and I have been asked to ring his bell in a 10-bell salute at the party. Fortunately, there will be a few drinks around, because once I count to seven, I usually need another beer.

Ricky Johnson began wrestling in 1978, following in the footsteps of his older brother Rocky “Soulman” Johnson.