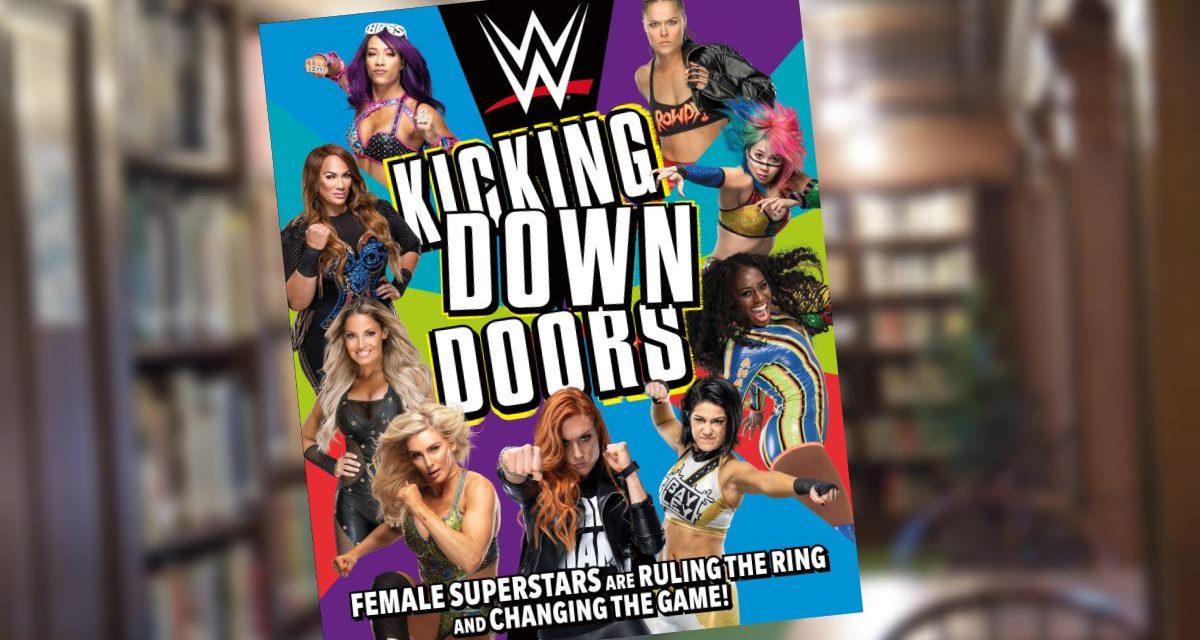 From the pioneers who paved the way for future generations; to the female champions that were persistent in their fight to breakdown barriers in the ‘80s and ‘90s; the ladies of the Attitude Era, Ruthless Aggression, and Divas; as well as the women that forced a wrestling revolution in World Wrestling Entertainment (WWE); the book, Kicking Down Doors: Female Superstars are Ruling the Ring and Changing the Game is a concise walk through memory lane in 128 pages.

The book, written by L.J. Tracosas and out now from DK Books, briefly covers the early years, spotlighting the incredible efforts of female superstars – well ahead of their time – like Josie Wahlford, Mildred Burke, and also names current fans can relate to like Mae Young and the Fabulous Moolah. From there, it features the achievements of Wendi Richter (and how singer Cyndi Lauper played a role) during the WWE’s Golden Era, as the female talents took the center stage when MTV (solely) broadcasted the women’s match profiled at the Brawl to End it All, taking place at Madison Square Gardens.

The colourful, photo-heavy book moves on to replay some of the biggest and brightest moments within women’s wrestling, historically and in chronological order. From the Rock ‘N’ Wrestling Connection to Miss Elizabeth’s debut, Jacqueline entering the landscape, how Chyna changed the way females were viewed, Trish Stratus and Lita’s rivalry, to the Bella Twins, the NXT factor, second-generation female superstars, the Four Horsewomen, Ronda Rousey’s jump to the company, Becky Lynch’s evolution, and the women’s historical WrestleMania 35 main event. The book captures all the ground-breaking events that unraveled to bring female superstars to the forefront of the WWE roster. There is even a brief mentioning of both the original women’s tag team titles (1983 to 1989), and the new tag championships brought into circulation in 2019.

The book features almost every WWE female superstar to ever enter that squared circle – whether as a wrestler, manager, announcer, commentator, or referee – and provides an extremely broad perspective around the impacts and accomplishments women have had in sports entertainment and the WWE. Note that it is just WWF/WWE. From debuts to first-ever matches, milestones, and moments, plenty of facts are thrown at you, without any analysis. Although it is important to note that female wrestlers circa the 1970s, like Vicki Williams and Joyce Grable, were not spotlighted; however, Grable was briefly mentioned as someone Richter not only trained with, but also tagged up with in the ring.

While no interviews are offered, the book contains interesting facts and quotes from a wide range of female (and male) superstars over the years, as well as incredible photos showcased throughout. Kicking Down Doors is a must have for any avid WWE fan of women’s wrestling and would certainly make a great gift for the younger members of the WWE Universe that reside in your household.

Buy Kicking Down Doors at Amazon.ca

Buy Kicking Down Doors at Amazon.com