The loss of Don ‘Hard Boiled’ Haggerty, who died Tuesday at age 78 in Malibu, California, will be felt most deeply at the Caulilower Alley Club reunion this April in Las Vegas.

Haggerty was a regular at the Club, a member for over 30 years, and was given the CAC’s top honour, the Iron Mike Mazurki Award, in 1993. In fact, he was such a supporter of the Club, that his family has asked that donations in his memory be made to the Club’s benevolent fund. 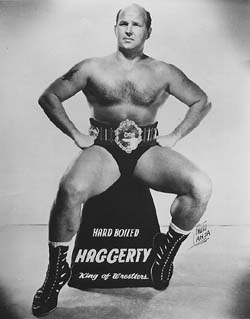 “The greatest part of coming to the Cauliflower Alley Club is memories,” the then 76-year-old Haggerty told SLAM! Wrestling in 2001 at the reunion. “We all have memories, and this is something that you cannot buy because everybody who comes to the Cauliflower Alley is a rich man. They’re all rich in the fact that memories you cannot buy. I’m having the greatest time seeing my old friends. This is the greatest.”

On the CAC’s web site, the organization’s vice-president Karl Lauer recalled the night Haggerty was given the Iron Mike Mazurki Award. “[Haggerty] said, ‘We will have to call me “Soft Boiled” after tonight,’ as he shed a tear, grinning from ear-to-ear. It was a sight that warmed the hearts of all of us.”

Born Don Stansauk, the 6-foot-1, 285-pound Haggerty attended Denver University, going to the wrestling matches in town. He was drafted by pro football’s Detroit Lions, and after a season there, ended up with the Green Bay Packers as a defensive tackle in 1950, wearing the Pack’s number 66, which would be retired for the legendary Ray Nitschke in 1983.

He made his pro wrestling debut in Green Bay in the football off-season, having learned some of the sport’s secrets in Denver under the tutelage of Danny Loos. According to historian James C. Melby, “Haggerty went on to Chicago and worked for promoter Karl Pojello. Pojello, who also managed the French Angel, said that Haggerty moved like a bird and gave him the name Don Sparrow. Prior to that time, HBH had been wrestling under his given name, Don Stansauk.”

Realizing that there was more money to be made in wrestling, Sparrow/Stansauk put down his helmet for good.

By the mid ’50s, he was a major wrestling star, headlining many territories. Minneapolis promoter Wally Karbo dubbed him Hard Boiled Haggerty. To his new monicker, HBH added the modest claim, “The King of the Wrestlers.” (Other wrestlers had used the Hard Boiled Haggerty in their careers, notably Benny Rosen and Lou Reyhneer.) Out of the AWA, was a multi-time AWA World tag champ, with Kinji Shibuya, Len Montana, Gene Kiniski and Bob Giegel.

“The Hag. He was really good for wrestling,” AWA promoter Verne Gagne said on the CAC’s website. “He conducted himself in his own way, and he could really crank up the people. Hag was an excellent guy and really lived up to the name Hard Boiled — (laughs) he couldn’t help it.”

He was a big star in Canada, challenging the entrenched Whipper Billy Watson in Toronto, the worshiped Yvon Robert in Montreal and top stars in Stampede.

“He was out here [in Calgary] in ’56 and ’57, had the art of arrogance down pat and just drove the fans wild with it all over the loop,” recalled Stampede promoter and photographer Bob Leonard. During his run in Calgary from May to July 1956, he worked mostly singles bouts, including several times against Whipper Watson for the NWA title in July 1956. Among HBH’s opponents on that run were Adrien Baillargeon, George and Sandy Scott, John Paul Henning, Johnny Foti (a very good draw in Regina, Foti’s hometown), and Fritz von Erich and Karl von Schober. He was back briefly in April and May 1957, and worked against Ursus, Roy Heffernan, and Al and John Smith for the most part. 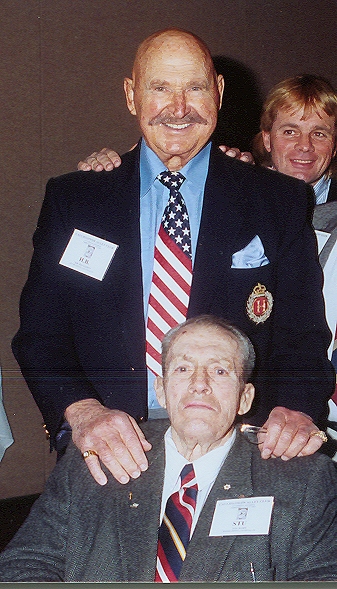 “[Haggerty] was a little different kind of heel for those days, looking more like a bank executive than a wrestler, but dripping with boldness and confidence to the point of arrogance,” said Leonard. “His style was just plain rough’n’tough, and his manner always belligerent. He’d had a good run on national TV out of Toronto, which had a great viewing audience here, and Stu was doing very solid business all over the territory, so the way was paved nicely for him here. I’ve long looked at HB as one of the quintessential heels of that type in that era, along with Johnny Valentine and Buddy Rogers.”

HBH was also very well known throughout California, Hawaii and up the west coast.

Hard Boiled worked as a wrestler for 35 years, but it was his career as an actor that got him some of his greatest recognition.

We’ve all seen him on the big screen — Foxy Brown, The Muppet Movie, Dirty Harry, The Big Brawl, Micki + Maude, Buck Rogers in the 25th Century, Deathsport — usually as a thug, or baddie of some capacity, a technique honed by his years sneering in wrestling (and his shaved head and mustache). He was equally proficient on the small screen, working such TV shows as Mr. Belvedere, The Incredible Hulk, Fantasy Island, The Love Boat, Happy Days, The Bob Newhart Show, Get Smart, Baretta and Starsky and Hutch.

Red Bastein, the president of the Cauliflower Alley Club, to the web site that Haggerty was one of the few wrestlers who could really say that they succeeded in Hollywood. “It’s not always easy to make a dent in entertainment or wrestling because of all the competition out there. HB not only made a dent, he kicked the door down! He was his own man and he did things the way he wanted to. I’m surprised he didn’t get sued for some of his behavior, but that was just the charm of HB. I really liked him tremendously and he will be sorely missed by all of us.”

On June 20, 2003, Haggerty was seriously injured in a car accident in Los Angeles. He suffered a broken neck, among other injuries. After leaving intensive care, he spent months in rehabilitation. He died this week at his home in Malibu, surrounded by his family.

The funeral will be held at Forest Lawn Cemetery,H ollywood Hills (at the Church of the Hills). 6300 Forest Lawn Drive, Los Angeles, CA on February 3, 2004 at 2:30 pm. A reception will follow at the Sportsman’s Lodge (in the Red Room banquet hall), 12825 Ventura Boulevard, Studio City, CA, which is the old home of the annual Cauliflower Alley Club reunions.

The family has asked that all donations be given to the Cauliflower Alley Club Benevolent Fund.