In Brantford, Ontario, Pat Murphy is your friendly, shy neighbourhood baker. By day he works at Maidstone Bakery, but occasionally he puts on a pair of tights and laces up his black boots in the hopes of one day becoming a WWE superstar.

When Murphy was four years old he saw a match between Ray “The Crippler” Stevens and Jimmy “Superfly” Snuka and became entranced with the sport of professional wrestling. He saw Stevens give Snuka a pile driver on the steel stairs and knew from that point on there was something about wrestling that he would never be able to get away from. 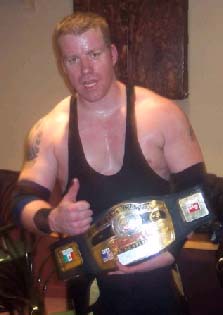 At nine he started his own promotion in his friend’s backyard, charging twenty-five cents to neighbourhood kids. “I was one of those kids that when my friends asked me to go out on Saturday I would say yes, but after watching wrestling,” Murphy said. “They would know too, that I had to watch wrestling, I couldn’t miss it.”

He took a course in Law and Security at Mowhawk College in Brantford. He was beginning to wonder if wrestling would happen but he would never give up trying. One Saturday night he saw Pete Parker, also from Brantford, on WCW’s Saturday night show. He’d seen him around town and would ask the former WCW Power Plant trainer if he would train him and help him get his foot in the door. “I kept bugging him but he sort of kept brushing me off. I still kept bugging him until he gave me a chance.”

Parker couldn’t ignore Murphy for long. Parker started his own training camp, Slam Factory. He called Murphy in to try it out and see if he could take it. Murphy couldn’t pass up the opportunity so he dropped the Law and Security course and took his first steps inside a ring.

“I knew I had to drop everything and go,” he said. “As soon as I stepped in a ring I knew that’s where I wanted to be. I didn’t see the window opening and then it all came through.”

Now, the 28 year old is wrestling as Scott Chase in his own promotion, Great Lakes Championship Wrestling (GLCW). He grew up admiring wrestlers like Arn Anderson and Tully Blanchard so it’s no surprise that his wrestling style emulates theirs. He’s a straight shooter, no gimmick, no nonsense grappler. He’s also going to be a changing force for the future.

“I just think that a lot of “wrestling” has been lost in wrestling,” he said. “I’m not a big fan of high flying but there’s definitely a place for them. It’s just not my style.”

Murphy had his first match in 1999 on an Indian Reservation in the now defunct CWI. It was before a crowd of about 200 people and wrestlers such as Doink the Clown and Brian Lee were on the card.

Eventually Murphy would be named Pat Pretty and enter a tag team called “The Pretty Boys” with partner Matt Pretty. “I hated it and it didn’t last long,” he said.

Later in ’99 he would team up with Eric Dawson and form the Texas Hellraisers. Fellow Canadian, Angel Williams, would end up being his valet. Not only did he get heat for his actions but he also received heat when he slowly let Canadians know where he’s really from.

“I liked being a heel more then a face,” he said. “I know there is a history, a roots for wrestling in Brantford.”

In Impact Wrestling Federation in Guelph, Ontario, Murphy would be paired with Tyrant and Angel. After this he would go on to many more independent organizations around Canada and the U.S.

It was a match with Bloody Bill Skullion that would stand out as one of his toughest matches he ever fought. The two went at each other in a blood bath with cheese graters, lead pipes, fireballs and any object they could get their hands on in front of 400 to 500 fans looking on. “We actually scared the crowd,” he said. “It’s not really my style but I thought that it was great.”

Currently he’s tagging with former WWE superstar, Tony Atlas and JQ Publik to go against GLCW champion Quinson Valentino, “The Real Deal” Magnus and “As Seen On TV ” Notorious T.I.D in his hometown of Brantford. His focus is on running the organization that airs on Rogers Cable in Brantford, Paris and Kitchener. He’s aspiring to get a wider audience however has not yet seen enough sponsors to branch out.

“I run things pretty old school,” he said. “We don’t have anything like what the WWE is doing with Chris Jericho and Trish Stratus but we have stuff like the heel and the face and their history fighting. Because we’re so small most of our audiance is watching for the first time so we can’t have long storylines.”

The wrestling at GLCW resembles a very old WWE when it was known as the WWF. “I prefer it when it was kayfabe,” he said.

Murphy has wrestled through countless injuries to his legs, arms and currently his shoulder, in the hopes that he’ll get his shot in mainstream wrestling.

“Hopefully I’ll be on TV every Monday Night,” he said. “Raw tends to be a better brand because they’re more about wrestling than Smackdown!, so I’d think I prefer going there but the goal right now is just to be in a WWE ring. If it’s against Chris Benoit, all the better.”