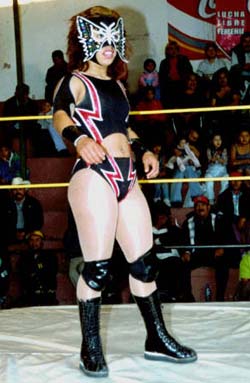 SANTILLO, MEXICO – If you can have only one symbol to represent the world of lucha libre, without a doubt, it is the wrestling mask.

For as long as some professional wrestlers in Mexico have hidden their identities, a unique mystique has followed and grown into a certified, cultural phenomenon. Suffice to say, in this wondrous world of brave Technicos (Faces) battling the vile Rudos (Heels), it is the men and women who enter the squared circle, putting their bodies on the line that bring it all to life.

It is in this distinct wrestling realm where the mask becomes more than just a gimmick. In fact, it comes to life in a way, creating a character that is adored (or hated) by the masses of Mexican fans.

For a young woman who made the decision to become a Luchadora, the mask she wears has come to symbolize a passion for professional wrestling, a passion that from the onset of her career, was kept a secret from her loved ones.

“I didn’t want my family to know that I was wrestling,” said Princesa Sugey, in an interview with SLAM! Wrestling, during the Santillo Cup 2003 event. In keeping with tradition, Sugey (pronounced ‘Soohey’) did not reveal her true identity, although it was confirmed that Sugey is her real second name.

For as long as she can remember, Sugey loved lucha libre, often attending live shows whenever she had the chance. The affection for the wrestling spectacle manifested itself into a desire to become a luchadora.

When Sugey, a native of Monterrey, idly suggested the idea to her family, they were quick to voice their concern.

“They said if you want to become a wrestler that’s fine, but you must take care of yourself because we don’t want anything to happen to you,” Sugey recalled.

But the distraction of her loved ones anxiety for her well being was something she did not want to contend with. Boldly, the athletically-gifted Sugey made the decision to train in secret.

She received her indoctrination to the wrestling world at the Escuelita Guadalupe school in Monterrey. There, Sugey received training from instructors Bello Kalifa and Carnicero Aguilar, enduring seven hour-days in the ring, learning the fast paced-submission lucha libre style.

On September 22, 1996, after training for only three months, Sugey entered the ring for her first match at the tender age of 16. Still fearful of her family discovering that she was a wrestler, she donned a mask.

“Those first years were difficult,” admitted Sugey. Like her counterparts in the rest of North America, Sugey had to traverse a variety of promotions, slowly but surely learning the lucha libre craft. “I had to become experience in the ring and the only way to do that was to wrestle as often as I could.”

But persevered she did and, in time, Princesa Sugey had garnered the attention of promoters who saw that she had what it takes to entertain wrestling fans.

One promotion in particular that noted her exploits was the AAA promotion, one of the two premiere wrestling companies in Mexico. “The promotion liked what I could do in the ring,” she said. “They said that I was a very good wrestler and they wanted to put me on television. I couldn’t believe it. They liked me, but I was so young.”

On August 17, 1999, Sugey debuted for the promotion. She would share the ring with many other famed luchadoras, including the likes of the Moreno sisters (Alda, Cynthia, Esther & Rossy), Miss Janeth, Martha Villalobos, Tiffany, Estrellita, Xochitl Hamada, Lady Apache, and others. Working with the promotion also afforded the opportunity to tour Japan.

Only adding to her success with AAA was her participation in specialty matches where competitors will put their mask or hair on the line. In the case of Sugey, she was victorious in winning a mask match against a fellow graduate of her wrestling school, Pantera Salvaje.

Always looking for new challenges, Sugey decided to join the fledgling all women’s promotion, Lucha Libra Femenil (LLF), based in her hometown of Monterrey. Already having established herself nationally, Sugey assumed the role of being the top grappler for the promotion, acting as a role model for up and coming luchadoras.

“She is extremely disciplined,” remarked Winnipeg’s Sarah Stock, who resides in Monterrey and wrestles with the LLF. Having wrestled against Sugey on numerous occasions, Stock did not hesitate to praise Sugey for her dedication and contributions. “With any training sessions that I’ve had with her, she tests me constantly. Hands down, she is the best woman wrestler I’ve ever worked. I learn something new from Sugey every time I have a match with her.”

The promotion would also become ground zero for an international feud involving Sugey that would span a continent.

LLF promoter Luciano Garcia de Luna was anxious to deliver an all women’s promotion that would display a diverse collection of wrestling styles. To achieve this, Garcia decided to import women wrestlers from the United States and Canada. “It’s been a very different experience wrestling with the girls from the northern cities,” remarked Sugey. “They have a different style.”

But nothing could prepare Sugey for the hardcore style of one particular wrestler from Montreal, Canada by the name of LuFisto. What erupted between the two wrestlers was an epic battle where LuFisto brought her brand of hardcore wrestling mayhem to the lucha libre landscape. Sugey was more than up for the challenge and the rivalry ensued.

What made the saga even more momentous was the reported fact that Mexican wrestling fans had never before seen women participating in a hardcore match. Throughout the past year, LuFisto and Sugey would duel against each other more than once in hardcore matches, including a vicious, dog collar bout.

“For me, it is an honor to wrestle against LuFisto in this hardcore wrestling style. In Mexico, there is nothing like that here,” she said, adding that of all her past feuds, this one easily ranks as the most memorable. “These extreme matches have been a good test of my courage. I was not afraid and I proved that.”

As for LuFisto, the respect against her arch rival is mutual. “The first impression was finally, a woman who can take the shots and is not afraid to try something different,” the Quebec-native said. “Her body language speaks for itself. She’s a wrestler, she hits hard, and she’s always ready to bring it on when we’re together in the ring. If I had to choose only one woman to wrestle with for the rest of my career, it would be her.”

Of all her achievements, perhaps the one that holds the most sentimental value is when she was finally able to divulge to her family about her true occupation. “My family knows and they’re proud of me,” Sugey confirmed. “They’re not scared about me getting hurt.”

Sugey remains focused in her wrestling pursuits, seeking out those unique opportunities to show fans what she can deliver in the ring.

One of such event took place in Atlanta, Georgia in September of last year, at an all lucha libre show. There, Sugey had the privilege of going one on one with fellow Mexican and international women’s wrestling superstar, Ayako Hamada. “Ayako is a great wrestler and it was an honor to compete against her. The people there really enjoyed our match. I hope I can go back again.” said Sugey, adding that she also hopes to come to Canada one day and wrestle LuFisto on her home turf.

“I want to come to Canada and take back the belt,” Sugey said, referring to the LLF Extreme Championship that LuFisto currently holds. “I want to travel more to the United States and Canada to show as many people as possible that Princesa Sugey is a great wrestler.”