Smackdown Your Vote! being felt on Capitol Hill

WASHINGTON — Two million. No, it’s not the number of pay-per-view buys for the WWE. It’s a much more significant number than that.

The WWE’s Smackdown Your Vote! campaign, designed to increase political involvement among young people, wants to add two million voters to the rolls in time for the 2004 elections.

Kurt Angle, chairman of the WWE voter education effort, said it’s time for young voters to understand that they can wield political clout. 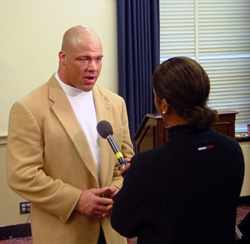 Kurt Angle talks about the Smackdown Your Vote! campaign with the Washington media. — Steven Johnson

The event was sponsored by the Congressional Youth Civic Caucus, a group of lawmakers that is searching for ways to increase the electoral participation of 18-to-30-year olds. Only about 36.1 percent of youths 18-24 voted in the closely-contested 2000 presidential election, the lowest rate among any age group.

“Everybody talks about the youth vote and then registering people to vote. I think that’s so important for our process,” said House Administration Committee chairman Robert W. Ney (R-Ohio).

“That’s why I’m very pleased to support private initiatives such as Smackdown Your Vote!” said Ney, co-author of a comprehensive proposal to increase youth civic participation in the political process.

Working with other youth-voter initiatives, Angle said Smackdown Your Vote! hopes to bring two million young voters into the process this year. Angle said the campaign is proud of having signed up more than 500,000 voters since the 2000 elections, but is looking for even bigger numbers.

“We believe if a person starts voting as soon as they can at age 18, they are going to become involved in all parts of the democratic process,” WWE star Bradshaw, a co-chairman of Smackdown Your Vote!, told congressional members and staffers.

Bradshaw said young people have to become more politically astute because events as disparate as the war in Iraq and the ballooning cost of Social Security are bound to affect their lives and pocketbooks.

Even on privatization of Social Security, Bradshaw noted the most interest in the issue comes from voters like his father, who is 72. But the cost and future of government-supported retirement and disability programs will fall on young people. “It affects our youth,” he said.

Also on hand were Shelton Benjamin and Charlie Haas, known to wrestling fans as “The World’s Greatest Tag Team.”

Haas called on candidates in 2004 to address issues like the economy and job opportunities so that young people feel their interests are not being ignored.

“These candidates need to relate to these 18-to-30-year olds and to assure them that there is a future, and, if they do vote, it will benefit them.”

The event represented just part of the WWE?s election year efforts. Ney credited the WWE with conducting youth voter forums across the country with members of Congress.

Next week, the Smackdown Your Vote! campaign will join forces with several major electoral players to unveil a white paper on public policy concerns of 18-to-30-year olds.

The report is designed to alert national candidates to the issues they must address to win an estimated 20 million votes from young voters in 2004. Backers of the project include the WWE; the Hip Hop Summit Action Network; the League of Women Voters; the Youth Vote Coalition; Rock the Vote; and MTV?s Choose or Lose.

Bradshaw and WWE CEO Linda McMahon are scheduled to be at a Washington news conference for release of the report.