Montana was wrestler before he died so well in The Godfather

A memorable death scene has been a staple of stage and screen through the years, from Hamlet to Darth Vader. And it’s not much of a leap to say one of the greatest death scenes ever was hitman Luca Brasi’s strangulation in The Godfather. But did you know Brasi was played by ex-wrestler Lenny Montana?

The story of Montana’s switch to acting and the death scene are equally fascinating — far more than his professional wrestling career. 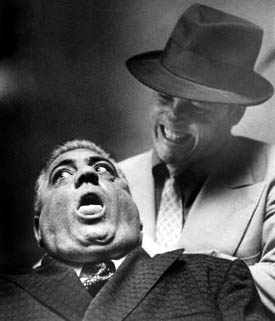 What a way to go … Luca Brasi takes his last breath in The Godfather.

Born Lenny Passofaro in Brooklyn, New York, in 1926, he wrestled for 25 years as a pro. Billed at 6-foot-6 (probably closer to 6-foot-3), and real wide — working at 270 pounds in his prime, and upwards of 340 pounds at other times — Montana was a midcard specialist, a thug to oppose the babyfaces.

In an interview with the GeorgiaWrestlingHistory.com website, Buddy Colt said that Montana’s disposition matched his look. “Lenny Montana was an asshole,” Colt asserted. “Just his attitude, arrogant, about like somehow he felt he was over and above a lot of guys. One time he started to get stiff with me in the ring and I got twice as stiff back and, ‘Hey, loosen up kid, it’s a work’. And after that he was okay.”

Pro wrestling-wise, his peak probably came around 1961 when he worked under a mask as The Zebra Kid, pinning his opponents quickly and then feuding with local hero Eddie Graham. He also revived the Chief Chewacki name (a star from the 1930s) and used a couple of other names briefly, including Len Crosby. 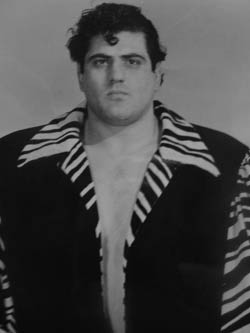 Championship title-wise, Montana held the Central States title in 1953, the Southern Heavyweight Championship in 1963 out of Florida and Georgia, and tag team titles with Hard Boiled Haggerty (AWA in 1960), Texas (as Len Crosby, with Gene Kelly — Gene Kiniski — in 1956), and various Georgia tag team titles with Tarzan Tyler (1963) and Gypsy Joe (1962).

Long-time fan Terry Dart of London, Ontario, saw Montana in the fall and winter of 1959 and 1960.

“The comical thing I remember about Montana was that I never saw a wrestler that had more hiding places for a rolled up paper cup to gouge his opponents eyes with, heck Bull had more hiding places for that rolled up cup than Bin Laden has hiding places,” joked Dart. “I remember that Bull would gouge his opponents’ eyes with the object then when the referee looked for it Montana would hide it under his armpit; then when the referee checked his armpit he would hide it in his trunks, then his mouth, back to his armpit and so on until the referee caught him and disqualified him.”

When Montana was first approached about his role in The Godfather, which was released in 1972, he had been retired from wrestling for a decade. Rumored to have had mob connections of his own, the publicity at the time of the movie said that Montana had been working as a public relations man for a company that made and installed storm fences in Long Island, where he lived.

The story he told again and again in film bumph is that he was at his mother’s house in White Plains, NY, and she told him there was a movie being filmed nearby. Montana went to check it out at a local bar. Standing behind barriers with others, he was soon noticed.

“I saw this guy staring at me every so often,” Montana told writer Dan Lewis in a piece for the San Antonio Express. “I didn’t know who he was, but he kept looking back at me from the other side of the barrier.”

The “guy” was The Godfather‘s producer, Al Ruddy, who called Montana over and asked him if he had ever done any acting. Apparently professional wrestling counted, and Ruddy brought Montana to meet director Francis Ford Coppola. Impressed by Montana’s look, Coppola immediately said that he was perfect for the role of Luca Brasi, hitman for the Corleone crime family.

The next morning, Montana headed to Manhattan to get a script, and the following day was in Staten Island for the opening wedding scene of the picture.

To get closer to the truth, it is important to understand some of the complications that Coppola went through getting the film made. Faced with much backlash from the actual Mafia, he elected to never use the term in the movie in exchange for a level of cooperation. Montana was on set one day as a bodyguard to one of the crime bosses. 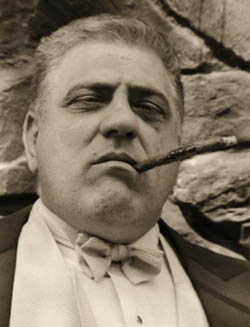 In his fascinating story, “The Godfather Wars” from the March 2009 issue of Vanity Fair, writer Mark Seal detailed the behind-the-scenes shuffling from the classic.

Seal said Coppola fell in love with Montana, casting him immediately as Brasi. “He used to tell us all these things, like, he was an arsonist,” associate producer Gray Frederickson told Seal about Montana. “He’d tie tampons on the tail of a mouse, dip it in kerosene, light it, and let the mouse run through a building. Or he’d put a candle in front of a cuckoo clock, and when the cuckoo would pop out, the candle would fall over and start a fire.”

In Mario Puzo’s novel of the same name and in the film, Brasi is Don Corleone’s loyal follower, who meets a grisly death trying to infiltrate a rival “family.”

Montana’s death scene, one of the most blood-curdling moments in the award-winning epic, apparently took 13 weeks to shoot.

In a Universal Press interview in 1973, Montana explained why it took so long to film. “It had to be real effective. The lighting wasn’t right. I fainted about five or six times. My ears and nose started to bleed. I got hemorrhages because I was holding my breath and blowing out. This was no trick photography.”

His eyes popping out, it turns out, looked so convincing because it was real. “The man actually strangled me. He put the pressure on with a rope. He pulled real tight and I helped by holding my breath. Sometimes I would black out and lay off about four or five hours. But being that Francis Coppola wasn’t getting strangled he didn’t care how long we took.”

Of course, his experience as a pro wrestler meant that Montana had to up the ante in the B.S. Department a little. Asked what he would do if the strangler went too far, Montana let it fly. “Well, from all my years in wrestling when guys put the sleeper hold on me I knew exactly when it was time to stop. I would bang on the bar when I had enough and there was a doctor standing by with oxygen.”

Before his on-screen death, Brasi’s hand is nailed to a bar with a knife. “A brace was fitted to my hand and the knife welded to the brace,” revealed Montana. “The make-up man covered everything with skin embalming. The guy would hold on to the knife and come down to the bar with it, that’s all.”

The new turn as an actor didn’t make Montana any less modest. He thought his performance was Oscar-worthy. “I’ve been told by many people, in fact by thousands and thousands, that I should be up for an Academy Award no matter how big the part was. I was effective and real. No props were used,” he said. “I think a man should be given an award for a thing like that because a man put his life on the line. The least the Academy could do is give me a little recognition.”

His last move was Blood Song, a horror flick that co-starred Richard Jaeckel and former ’60s hearthrob Frankie Avalon, which he also co-wrote. He died of a heart attack on May 12, 1992 while in Vierri, Italy. He was 66 years old.