Karl Lauer, dead at 83, was the Cauliflower Alley Club 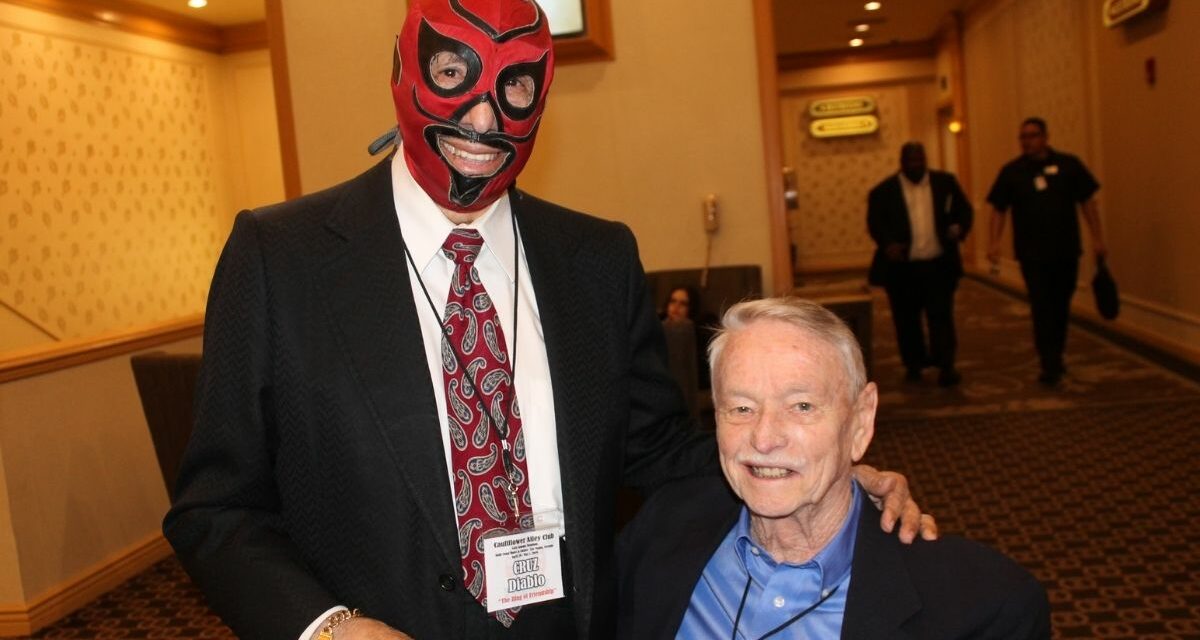 In 1979, Mike Mazurki, founder of the Cauliflower Alley Club, asked Karl Lauer, a wrestling promoter in Los Angeles, to join the organization as its business manager.

He served as business manager until 1983, and then was made, at various times, vice-president, and chief operating officer. He was Chairman of the Board of the Cauliflower Alley Club for 32 years, stepping down in 2015.

The best way to explain Lauer’s role is to say that he was the anti-figurehead. While CAC presidents like Lou Thesz, Nick Bockwinkel and Red Bastien were up front, Lauer was behind the scenes, putting the right people in the roles that he thought would benefit the CAC.

“I’ve known Karl for many years and first met him when I attended the CAC back in the 2000s when they honored Buddy Colt,” said current CAC President Brian Blair. “I became much closer with Karl when I became the president of the CAC, succeeding Nick Bockwinkel before the 50th reunion. Karl was a real mentor to me and was extremely dedicated to the Cauliflower Alley Club, it was his life! He will be sadly missed by many.”

Karl. K. Lauer was born in Chicago, Illinois on August 12, 1938. In 1940, his family moved to Los Angeles, where he lived until 1994. Karl Lauer Sr., originally from Germany, was the founder of Karl’s Equipment Co., which built Flot-Aire refrigeration cases.

The younger Lauer joined the United States Air Force in 1958, and served four years. Among assignments were Cambodia and Greenland/North Pole.

Upon leaving the Air Force, Karl Jr. joined his father, expanding the company, which was based out of Ontario, California. It is particularly well-known in the floral industry. Today, Wayne Lauer, son of Karl Jr., runs the company.

On June 7, 1960, Lauer married his wife Barbara (known as “Babs”), whom he met in the Air Force, when they both were stationed in Charleston, South Carolina. They were married for 55 years, until her death in 2016. They had two sons, Wayne and Mark. 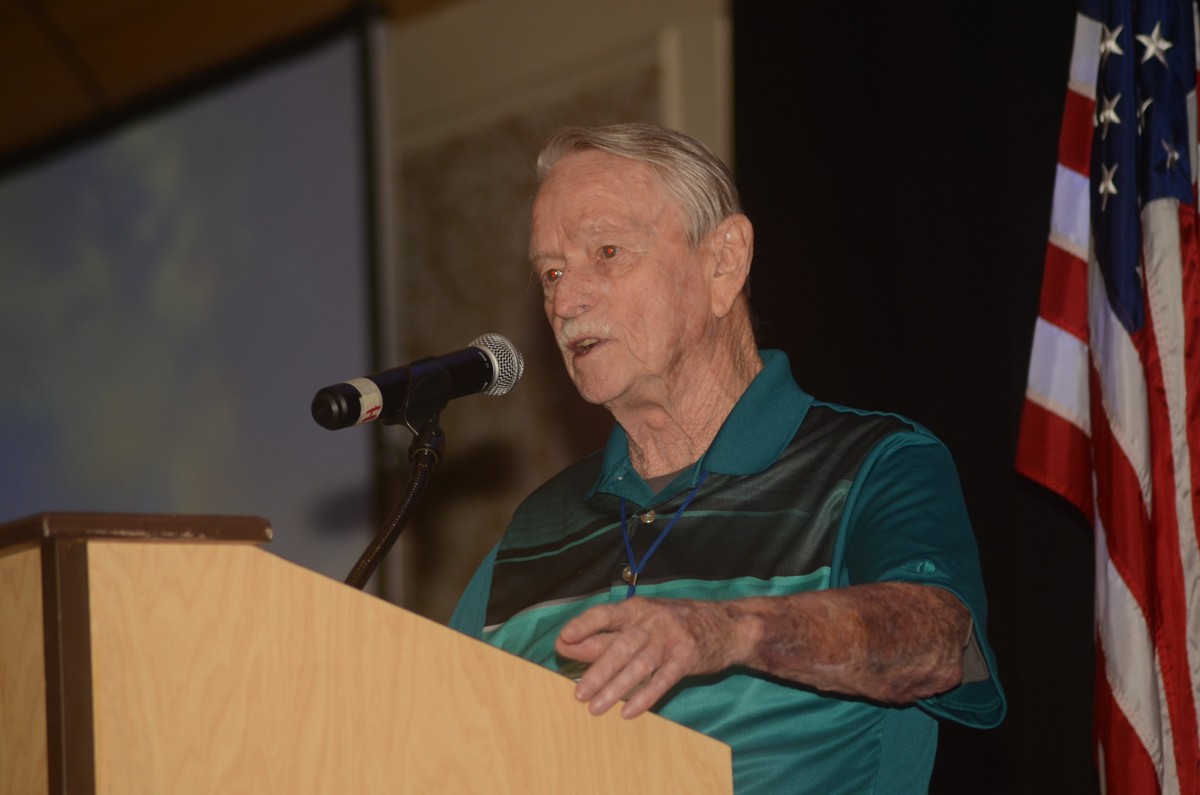 Knowing that connections outside of business mattered, Karl K. Lauer served on the United States Congressional Advisory Board from 1980 to 1992, under US Presidents Ronald Reagan and George Bush. It was a non-paid appointment.

Wrestling and promoting was a part of Lauer’s blood. He often mentioned attending the wrestling matches in 1947, and trying to get wrestler autographs.

Some of the big, strong wrestlers worked at Karl’s Equipment Manufacturing, and through that connection, Lauer got to know “Honest¨ John Cretoria, “Brother¨ Frank Jares, “Irish¨ Pat Fraily, Alex Kasaboski and Vic and Ted Christy.

He wrote about his fandom in the CAC newsletter often. Here’s one of about his early days:

At 9 years old, Leo Garibaldi (who is still my close friend today, 59 years later) took me to the storied Olympic Auditorium in Los Angeles and convinced Johnny Doyle that I would be good at hawking peanuts. I was hooked from that point on, but it wasn’t until many years later when Baron Michele Leone let me in on the secret that he really didn’t hate my heroes, Sheik Lawrence and Leo Garibaldi. For 32 years I was content to be a wrestling fan. In that time, I started my own business (Flot-Aire, Inc) and established offices in 27 cities as well as Japan, Mexico and Taiwan (plug for my son, Wayne, who now runs the business – if you ever want to go into the flower business, look him up at www.flotaire.com).

In 1979, at his local church, Lauer met Gory Guerrero, and they became great friends. Guerrero, who was the patriarch to the great Guerrero clan — Chavo Sr., Mando, Eddie, Hector, and later generations, asked Lauer to help him promote pro wrestling. “It was quite a good fit as I had the money and connections in the business world and Gory had the knowledge of the pro wrestling business,” wrote Lauer.

Six Amigos, Inc. was the official name of the promotion, and they ran shows every week in San Pedro (in the South Bay of Los Angeles), Santa Ana, Oxnard and Oceanside. “I learned the wrestling business top to bottom from Gory — booking, keeping records and, most importantly, dealing with the divergent personalities involved in the ring wars,” noted Lauer.

He also learned to wrestle, studying until Garibaldi and Toru Tanaka, and would very rarely wrestle under a mask as the Masked Bossman or Gringo Patrone.

Guerrero was the conduit for Lauer to go to his first CAC, which was a very closed organization at the time, not open to people outside the wrestling, boxing, roller derby or acting worlds.

With Guerrero’s health failing, he stepped away from the promotion, and Lauer went on his own and started California Pro Wrestling. He produced TV shows for KDOC Channel 56. The promotion worked with Mora and Fajardo in Mexico, and it ran shows at  the famed Olympic Auditorium near downtown Los Angeles, as well as semi-monthly shows in Las Vegas at the Showboat and spot shows at high school gymnasiums and college auditoriums.

At one point, Lauer also promoted stock car racing mixed with wrestling — Wrestle Race — with Mike LeBell, who ran the NWA promotion in L.A. There was a race, and then the ring would be rolled out for a match, repeat.

When Lauer lost the license to promote the Olympic, he kept going at a variety of locations, and leaned very heavily into the lucha libre style.

More importantly, Lauer had a wrestling promoter’s license for Los Angeles — which was exceedingly hard to get.

“I was on and off involved in pro wrestling going back to the Olympic Auditorium,” recalled Brandon Pender, who worked with numerous promotions. “It was back when you had to have a license, it was the Athletic Commission licensing wrestling at that particular time. There was only two in California, one was up in San Francisco, the guy who ran the Cow Palace promotion, Roy Shire … and the other was … Karl Lauer.”

Therefore, when a promotion like WCW or WWF wanted to come to Los Angeles, it would make a deal with Lauer.

In 1992, Lauer stopped promoting, and a few years later, he moved to Rolla, Missouri, where a Flot-Aire factory was run by his son, Wayne. He had a cattle ranch, where the cows were named after wrestlers.

Wrestling never left Lauer’s blood. Not far from Rolla was the legendary Harley Race, and together, along with David Marquez, they started what would become the World League Wrestling promotion. In 2000, Lauer began working for the Missouri Office of Athletics in a part-time position  as well.

In 2013, when he was presented with a Missouri Wrestling Revival Lifetime Achievement Award, Lauer considered his wrestling days: “I never consider myself as a wrestler, nor was I ever very good in the ring, but I always felt I was very good on the mic, and I could create, control and excite a crowd very well,” he said, continuing. “Wrestling was never my main source of income. Though I has made a lot of money at it, MFG and finance have always been my forte, from a kid who use to watch the greats in the ’40s and ’50s to selling peanuts at the Olympic Auditorium and other arenas around the Los Angeles areas to becoming a successful promoter has been the least to say a fun and a good ride.”

Lauer was a major part of the CAC deciding to expand and include fans, taking membership from 350 or so, to over 8,000.

The Cauliflower Alley Club, appropriately enough, announced Lauer’s death on April 24, 2022; he had been in failing health. He had been feted at many CAC events, including 2012 for a light-hearted roast, where he brought along his heart surgeon as a thank you for saving his life, and in 2006, Babs was celebrated with an unannounced award. “Anything I’ve done, it’s because she let me,” Karl joked at the time.

ADDENDUM: The funeral for Karl Lauer will be May 2nd, visitation from 12-1 pm, followed by the service, at Null and Son Funeral Home, 1010 Kings Highway, Rolla, Missouri.

EDITOR’S NOTE: The original article listed Karl Lauer as 84 at the time of his death, he was 83.