Mike Mazurki is the heavyweight champion of wrestlers turned actors. With his busted-up, deeply etched face, cauliflower ears and crooked nose, he turned years of getting beaten up for a living into an asset. 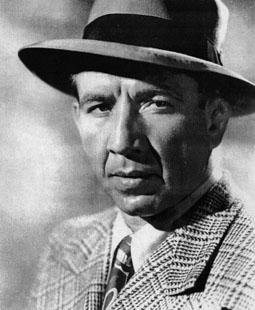 His success in Hollywood paved the way for many contemporaries to land roles in movies, taking time off from the rigors of the road. Without Mazurki, there would be no Rock carrying a picture.

“[Mazurki] was the first wrestler that really made a career out of it,” acknowledged Howard “Pepper” Martin, who would also turn to acting during his wrestling career.

But his legacy is much more than just acting, or for that matter, wrestling. Mazurki, who died in 1990, left the wrestling world with the Cauliflower Alley Club, a not-for-profit fraternal organization of ex-wrestlers, actors, boxers and sundry other hangers-on. The center of CAC action in the early years of the 41-year-old organization was Mazurki’s Baron’s Castle Restaurant in Los Angeles’ MacArthur Park. Once it outgrew his restaurant, it stayed closeby in Studio City, Calif., for many years.

It’s his cauliflower ear on the CAC’s logo, and he was the figurehead for the club for many years. The top honor in wrestling, the Iron Mike Mazurki Award, is handed out each year at the CAC banquet.

According to Maria Bernardi, a former woman wrestler turned secretary for the CAC in the nascent days of the club, Mazurki was “a big teddy bear, that’s what he was. In all the years we ran that club, we only had one clash, and that was because somebody else caused it”

Born in the part of Austria-Hungary which is now known as Ukraine on December 25, 1907, Mikhail Mazuruski came to the United States as a child, and his parents settled in Cohoes, New York. He was not just a dumb jock, graduating near the top of his class at Manhattan College, from which he received a Bachelor of Arts in 1930. Mazurki studied law at Fordham University as well. He was also a talented football player, and played at college and semi-pro in New Jersey.

By the early 1930s, he’d turned to pro wrestling to make a buck.

“That was during the Depression and I could make 10 times a lawyer’s salary wrestling,” he told the Globe & Mail newspaper in 1970. “Remember I did the hard stuff, not the kind of wrestling you see today. I’d spend a couple of months a year in hospitals.” 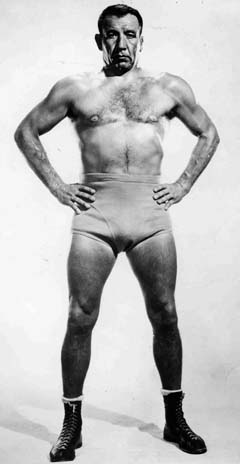 Indeed, the injury refrain would be one that he would repeat consistently during his career. “I’ve broken nearly every bone in my body,” claimed Mazurki in Whatever Happened to Gorgeous George? “If that was all faked, I took a lot of punishment for nothing.”

As a wrestler, the 6-foot-5, 240-pound Mazurki was a solid mid-carder who only occasionally rose to the very tops of the cards. He worked with all-time greats like Ray Steele, Gus Sonnenberg, Frank Sexton, Gene Kiniski, Strangler Lewis, Jim Browning, Mr. Moto, Lou Thesz, Jim Londos, Joe Savoldi, Man Mountain Dean and others during his career.

The Shanghai Gesture in 1941 is the film that he credits with the start of his acting career, though he was in 1935’s Black Fury as well. Discovered wrestling in Los Angeles by director Josef von Sternberg, Mazurki was given a crack at a role in The Shanghai Gesture.

In a 1952 article with a Toronto newspaper to promote his appearance on stage (singing!) in Guys and Dolls, Mazurki recalled his skepticism.

“I am wrestling in Los Angeles and while I am in the dressing room later I am getting a note asking if I would be interested in a movie career. I am thinking the boys are playing a joke on me, and I am putting the note in my pocket because I am not going to be laughed at,” he explained. “One my way out a guy comes up and asks if I received the note. He says he is Von Sternberg, who discovered Marlene Dietrich. I am asked to report to the studio next morning for an interview. I am still thinking it is a joke, but I decide to play along with the gag.”

He got the gig, shaved his head to become a Chinese “coolie” on the docks, and traded lines (“You likee Chinese New Year?” with co-star Walter Huston.

If a star was not really born, or at least a memorable mug was launched.

Katz’s Film Encyclopedia seconded the typecasting: “His massive build and crude features led to his being typecast as a sharp-knuckled, dull-witted thug.”

He had some very memorable roles on the big screen, including Splitface in Dick Tracy, and boxer Jake Kilrain in Gentleman Jim; he was a slave-trader in Cecil B. DeMille’s Unconquered and a deaf mute in Spanish Main. Mazurki got the chance to rub shoulders with real Hollywood royalty too: Marilyn Monroe and Tony Curtis in Some Like It Hot, John Wayne in Donovan’s Reef, and Abbott and Costello in Abbott and Costello in Hollywood. There were many television appearances too, including It’s About Time, Charlie’s Angels, Kung Fu, Gunsmoke, Mannix and The Chicago Teddy Bears.

Mazurki was even given a lead role in the 1975 kiddie nature-adventure feature Challenge to Be Free. (“Fur trapper is pursued by the law in Arctic surroundings; simple and simple-minded, best for younger viewers,” reviewed Leonard Maltin.)

But as far as roles closest to the truth, it was Mazurki’s take on Kay Kendall in Jules Dassin’s 1950 film noir Night and the City that drew the best reaction. The flick is still among the best ever done on professional wrestling. 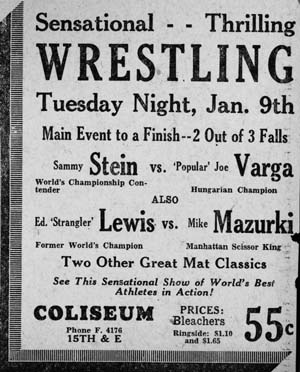 Throughout his acting career, he never really gave up pro wrestling. Mazurki admitted to loving the reaction of the crowd, and the ability to play with their emotions. When he couldn’t compete anymore, he worked as a referee.

Mike Mazurki died in Glendale, California on December 11, 1990 at the Glendale Adventist Medical Center. He was 82 years old, and survived by his third wife Sylvia Weinblatt (whom he married in 1968) and daughters Mannette and Michelle from his second marriage to Jeanette Briggs.