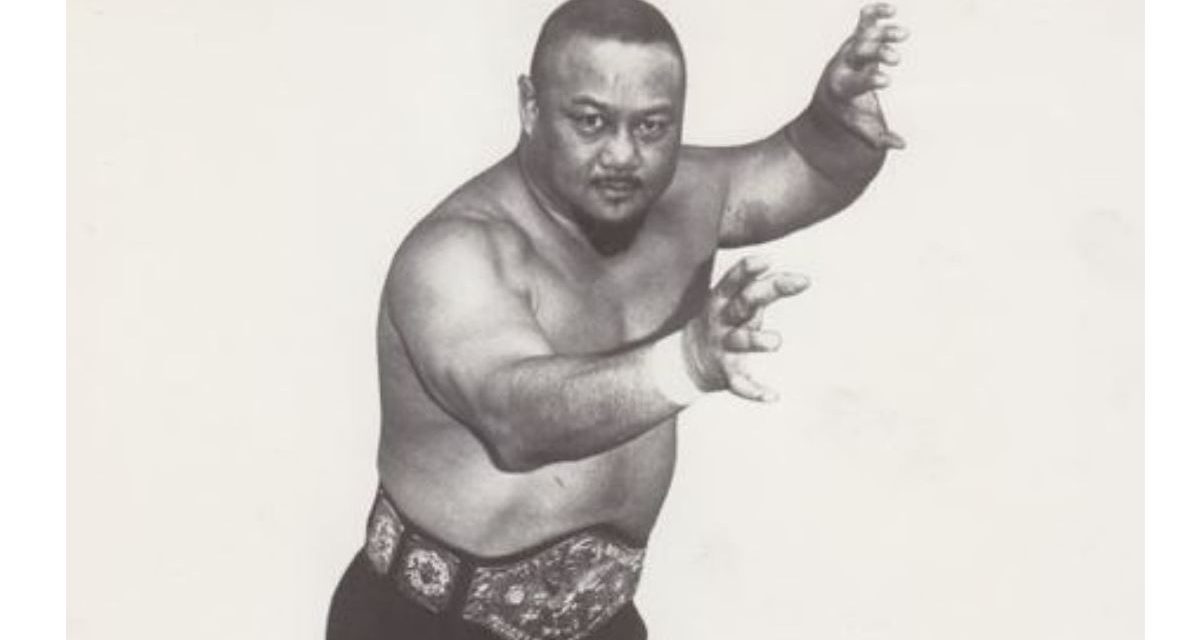 Complaints about a lack of ethics from the pro wrestling industry are legion. But according to the widow of wrestler-turned-actor Professor Toru Tanaka, the grappling game is lily white compared to the movie business.

“When he got into the film industry, it was just unreal. It was so phony. People used and abused him because he was a nice person. He was a generous person, and people took advantage of that,” complained Doris Peterson Kalani, who was married to Tanaka (Charlie Kalani) for 47 years, until his death by a heart attack on August 22, 2000, in Lake Forest, CA.

For many of his film roles, Tanaka didn’t have to do much more than be an incredibly imposing figure, dwarfing whatever protagonist he was matched with. It wasn’t hard, given his 6-foot-2, 300-pound frame, making him more tank than man.

Usually typecast as a Japanese thug, the Hawaiian-born Tanaka stood up against the likes of Arnold Schwarzenegger (Running Man and Last Action Hero), Chuck Norris (Missing in Action 2: The Beginning), Jeff Speakman (Perfect Weapon), and, perhaps most memorably, Pee-Wee Herman (Paul Reubens) as a butler in Pee-Wee’s Big Adventure.

He also appeared on many TV shows, including Airwolf, The A-Team, The Fall Guy and Mickey Spillane’s Mike Hammer. On a 1976 episode of Fight Back with David Horowitz, he even appeared as himself.

For both his film and wrestling career, the nice guy Kalani had to become a bad, bad man. Fans of his wrestling work in the 1970s no doubt still can picture Tanaka tossing salt into the eyes of his foes.

“Tanaka was limited as heck as a worker, but he was a great guy,” recalled Bill Watts. “He wasn’t what I’d call a great worker. Certainly an impressive guy.”

Former San Francisco wrestling announcer Walt Harris remembered Tanaka coming by the station after Harris was through the wrestling gig. “I didn’t happen to be in and he left a note on my desk. ‘Buddha bless you,'” said Harris. “He was a nice guy.”

“He was just a gentle, good, soft-hearted island boy,” Doris Kalani told the Honolulu Star-Bulletin after Tanaka’s death. “And he had to work very hard all his life. It was hard not to be bitter when he got into wrestling and show business because he had to change his personality. He always told our kids, ‘I’m your father at home and other people will not know the real me.'”

Born in Honolulu on January 6, 1930, to Charles J. Kalani and Christina Leong Kalani (who was part Chinese), Tanaka began studying judo at age nine. At Iolani High School, he was a natural at many sports, and Doris Kalani credited his time on the football team with keeping him away from trouble. “He was a street kid getting into trouble and would have ended up in reform school if Father [Kenneth] Bray hadn’t helped him out by bringing him to Iolani. He felt Iolani saved him,” she told the Honolulu Star-Bulletin.

He would leave Hawaii for Utah’s Weber Junior College (now Weber State University), and Tanaka met his wife Doris at the University of Utah in 1952. Drafted into the U.S. Army in 1955, Tanaka would rise to the rank of sergeant, and excelled on the pistol team.

For four years, Doris and Charlie were at the base in Nurenburg, Germany. “A German friend of his started taking judo from Charlie. … Charlie was giving little demonstrations at the gym on the base. That friend told him about some wrestling matches that were around in the area,” said Doris. “It was like being in a circus being married to him. We were married for 50 years. It was always sports and activities like that going on all the time. I remember going to a wrestling match in Nurenberg. They had wrestlers from other countries at this match, like Italy, Poland. I don’t remember any American wrestlers at that time.”

After his discharge from the service in 1966, the couple moved to Monterrey, California, where Charlie ran a judo academy. San Francisco promoter Roy Shire asked him to wrestle in 1967, but he had to get meaner. “Charlie was almost full-blooded Hawaiian,” said Doris. “In wrestling, Hawaii seemed not as exciting as Japan, so they talked him into becoming a Japanese wrestler.” 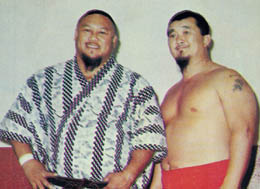 Tanaka’s most famous tag team partner was Mr. Fuji (Harry Fujiwari), whom he knew from high school in Hawaii. In his book, Listen, You Pencil Neck Geeks, Freddie Blassie explored the relationship between the two “Japanese” heels. “From Tanaka’s point of view, he was passing time with Fuji because it made sense to team up with another Japanese villain. The two certainly had no great admiration for one another. Tanaka was a by-the-book guy, who looked at wrestling a means to make a living. He wanted to work his match, shake hands with everyone afterwards, and save some money. He was a professional,” wrote Blassie. “If you wanted to talk about an angle beforehand, you always went to Tanaka. He was the ring general, who’d lead everyone else in the match. Fuji was certainly a good performer, but you couldn’t control him. So, in addition to worrying about their opponents, Tanaka had the responsibility of making sure that Fuji didn’t get out of hand. I guess he did a pretty good job because, years later, when Tanaka was relegated to working these tiny independent shows to earn a few extra bucks, Fuji himself had become a manager.”

By the early 1980s, Tanaka’s body couldn’t handle the beatings in the ring any longer, and he moved into the film world on a more permanent basis. His first flick was 1981’s An Eye for an Eye.

He and Doris separated for a few years, and when she re-entered his life, he was a shell of the man she knew. “We were separated for a few years. He went down, his body. He died … of Alzheimer’s and Parkinson’s Disease. For such an exciting life that he had … the end was so sad. He would just sit and stare. He was very weak and had to be helped walking. So it was a very sad ending for him.”