Cinco de Mayo is a Mexican celebration, but in recent years it has become a bigger celebration in the U.S. than from its home in Mexico.

One day after Cinco de Mayo, but still during the celebration, IWR is holding “¡Revolucha 3!,” at the Royal Oak Music Theatre, in Royal Oak, Mich. The event, scheduled for May 6, will contain a mix of some of the biggest names in Lucha Libre with local talent from the IWR. 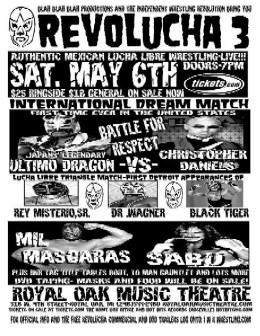 Mil Mascaras, Black Tiger, Dr. Wagner Jr., Sabu, and Rey Misterio Sr. are all scheduled to appear, but the most talked about match-up is Christopher Daniels vs. Ultimo Dragon. The two have amazingly never crossed paths. It will be their first match-up, and it marks Dragon’s return to the U.S.

Bubba Mackenzie, the local promoter of the show, and wrestler, was asked about promoting a Lucha Libre event in Detroit, a town with one of the larger Hispanic populations in the north of the Mason-Dixon Line. “We are appealing to the fans that know the names and the style. You say ‘Dr. Wagner Jr.’ and then associate him with Lucha Libre, people will recognize at least one. Both ECW and WCW had success with the style, and it’s a form that no one on the Northern independent scene is taking advantage of.”

It’s the third Lucha Libre show the promoter has put on in the last year. Mackenzie hopes to build in the future based off securing a distribution deal for DVDs of the shows. “We pride ourselves in the production value. This third show will bring in our best production, and with a third installment, I think we have a solid series to offer a distributor.”

The show will also feature local talent from the IWR including Jimmy Jacobs, Zach Gowen and Truth Martini. IWR hopes to gain a new audience for their non-Lucha shows by presenting their own talent to an expected large crowd.

“We pair our guys with the bigger stars on purpose to prove to the world that we’re producing and promoting world class wrestlers, and our young guys are the future of the sport.” IWR has seen many stars before they were able to break out in a larger scale including Jacobs, Gowen, Chris Sabin and Alex Shelley.

Securing Ultimo Dragon on the show came with a little misfortune. Ultimo Guerrero, originally scheduled, broke three ribs during a match in Mexico. The booking agent in Mexico helped IWR secure a new name, and when Ultimo Dragon was given as a possible alternate, he was signed.

“It’s a lot of work to get names from Mexico to the U.S.,” said Mackenzie. “You have the language barrier, plus plane flights to secure. It’s hard but it will be worth it on May 6.”

“I expect that fans are going to leave the show with a true feeling of having been entertained, and I hope that we see all of the different cultures of the Midwest represent and show some love, because we got something for everybody.”