Mike Lebell, the promoter of the NWA Los Angeles territory during the 1960s and 1970s died this afternoon. He was 79 years old.

According to his former co-worker, Jeff Walton, Lebell died in Los Angeles, at 3:50 p.m., of apparent respiratory failure. 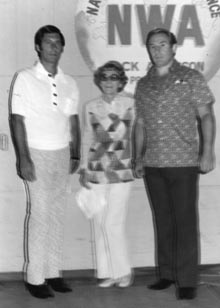 Just about every big name in professional wrestling passed through the Los Angeles office during Lebell’s tenure, and its ties to the Japanese promotions were always strong.

The showcase arena for Lebell was The Grand Olympic Auditorium, which dates back to the 1932 Olympics in L.A. Sports Illustrated once dubbed the Olympic “an ancient, graying, high-ceiling fortress of boxing on South Grand Ave.” Lebell’s territory extended beyond the city as well, and encompassed much of southern California, including towns like Long Beach, San Bernadino, Ventura, and Pasedena.

“The only reason this territory survived was the density, the population, especially the Hispanics,” explained former Los Angeles referee Art Williams, who admitted he was not a fan of Lebell personally. “We had some great workers here.”

In Blassie’s autobiography, Lebell explained how the territory succeeded:

Our territory extended as far as we could go south of L.A., and five miles this side of San Francisco. Along the way, we put on shows at little clubs. That was our backbone. If we drew $5,000 at the little club, my God, you could pay all the wrestlers like $75. At the end of the week, they’d wrestle at the Olympic, making $500, $800, maybe some $1,000. They were happier than hell.

The little clubs cost us nothing. In those days, it was like a joke. We paid $50 rent, and in most of the places, we built rings and left the rings there. That was about it.

One of the biggest wrestlers we had, Mil Mascaras, was a Mexican star, and he never wanted a guarantee. He’d wrestle for whatever. If we’d go to a little club, and we only had a $5,000 house, he’d take a hundred and a half and thank me for it.

Lebell is believed to be the first North American promoter to use closed-circuit television locations to broadcast the matches to the fans who couldn’t get into the arena.

“We know for a fact that there are 10,000 people outside now who can’t get in. These people live and die wrestling. If we told them there was going to be wrestling at 4 o’clock in the morning, they’d be here,” Lebell said in an August 1971 interview with the Los Angeles Times after his first closed-circuit broadcast.

In the same interview in the Times, Lebell talked about the passion of his regulars.

“About three years ago.” he said. “A lady slumped over in her chair next to her husband and they took her to the dressing room. She was dead. So now they had to tell her poor husband: ‘Pardon me. sir. Could you come with me? Your wife has passed away.’

Lebell’s mother, Aileen Eaton, held the rights to promote in the Olympic Auditorium. “I just love this building,” she said in a 1972 interview. “Do you know this is the only large building in the whole country that is built especially for boxing and wrestling? It’s cozy. The employees are like one big family. It’s a friendly place.”

Eaton had two sons with Maurice LeBell, who had been paralyzed after a near drowning, and died in 1941: Mike, who the box office manager and the treasurer for Aileen Eaton Incorporated, and “Judo” Gene LeBell. “Judo” Gene helped with the promotion, often as a troubleshooting referee, while he carved out his own career in wrestling, judo and the movie industry.

Eaton, meanwhile, became a major boxing promoter both alongside and after her second husband, Cal Eaton, died. She would promote more than 10,000 bouts over the years, including the likes of Floyd Patterson, Joe Frazier and George Foreman. Eaton, who died in 1987, was the first woman inducted into the International Boxing Hall of Fame, in 2002.

In a 1967 Sports Illustrated profile, Eaton’s business was featured, and her son’s was mentioned as well. “Whether there is any truth or not in the line, Aileen Eaton is, as one manager put it, ‘very unstupid.’ Her weekly boxing shows gross close to $1 million each year, and her wrestling shows, directed by her son Mike, do better yet.”

Struggling to survive until remarrying, Eaton sent her sons to the California Military Academy “on a trade deal. I handled the academy’s advertising in exchange for room and board for the boys.”

“Graduating from college, my choice was being an optometrist or promoting wrestling,” Mike Lebell told Wrestling Revue magazine in 2003. “Of course, I chose wrestling, and am glad I did! Oh, there were many times I second-guessed myself along the way and wondered why I settled on such an unpredictable business, but overall, I wouldn’t have done it any other way.”

According to Walton, who served as a publicist, starting in 1969, Lebell was all business. “Mike never impressed me as really being that interested in wrestling. He was interested in filling seats,” Walton wrote in his autobiography, Richmond 9-5171, A Wrestling Story

KCOP-TV, Channel 13, played a big part in the success of the Los Angeles territory, with its wide reach and charismatic host Dick Lane into the early 1970s.

Over the years, a number of other promoters tried to break into the Los Angeles territory. Johnny Doyle, who once promoted at the Hollywood Legion Stadium, was one of them, as was Verne Gagne. Ivan Koloff and Superstar Billy Graham teamed to briefly challenge Lebell as well.

Lebell’s best-known promotions were the 1971 show at the Los Angeles Coliseum, a stacked card headlined by the feud between Blassie and Tolos, and his involvement with the 1976 Muhammad Ali versus Antonio Inoki fight in Japan.

The Blassie-Tolos feud, started with the infamous “Monsel’s powder” thrown by Tolos into Blassie’s eyes, was kept running for months, with Blassie “hospitalized” and unable to wrestle. The promotion smartly kept them apart. Blassie would show up unexpectedly at shows, screaming for Tolos’ head, his eyes still bandaged. “They never touched each other. They’d come close. You’d see cops coming and grabbing Blassie and straining to hold him back,” said longtime L.A. office figure Jeff Walton. When Blassie and Tolos finally met, it resulted in a crowd of 25,847, paying $5-$7 for a live gate of $142,158.50. “The paper said it was 25,000 but it looked like 35,000 to 40,000,” said Tolos. “It was a hell of a big, big, big card.”

However, in the 2003 interview with Wrestling Revue, Lebell said the crowning glory of his promotional days was a bout between Mil Mascaras and Black Gordman. “This match took us five months to prepare and sell. Gordman defeated Mascaras to begin the program. We then announced Hair vs. Mask and sold out the Olympic Auditorium in two days, and sold out five closed-circuit theatres.”

Lebell closed his promotion in 1982, ceding the rights to the territory to Vince McMahon.

For the last two decades, Lebell sold videotapes of hard-to-find movies and events. “I’ve had a great run, it’s a very relaxing business compared to wrestling,” he told Wrestling Revue.

He had distanced himself far, far from the wrestling business. As well, Lebell and his brother, Gene, had been at odds for years and years, over a number of issues, with money being a major factor.

Few oldtimers see promoters through rose-coloured glasses. As the controller of the pursestrings, just about everyone believes that they were shortchanged financially or never used correctly. Mike Lebell was no exception.

The former ref Williams tried to explain. “Mascaras was a nice enough guy. His ego was strengthened by his association with Mike Lebell, who did not know how to handle wrestlers. Lebell had no business being in the business. He got into the business because his mother handed it to him,” said Williams.

In his autobiography, Blassie was even more direct. “Even during the best of times, I was always waiting for him to put a hatchet in my back. I feel pretty confident saying that every wrestler in the territory felt the same way. Because of all the publicity we got in L.A., you’d wind up with the press clippings while he wound up with the money.”