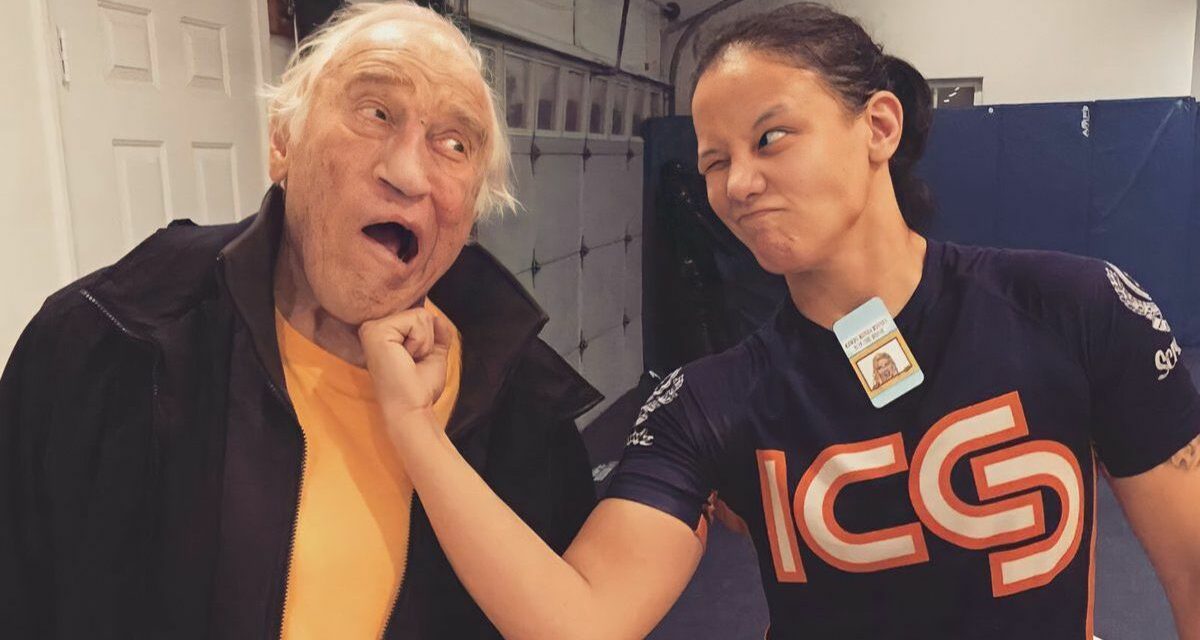 The tributes for “Judo” Gene LeBell, who died on August 9, 2022, at age 89, poured in after news of his passing starting circulating. It was a fascinating collection of people mourning too, from the world of pro wrestling, mixed martial arts, acting, and beyond.

Here’s an attempt to share some of those posts and tweets from the cross-section of his life.

Shayna Baszler, mixed martial arts/pro wrestling (in top photo with Gene LeBell):
“I won every R-E-A-L fight I ever had & was penniless. I LOST every R-E-E-L fight I ever had and made millions” — Judo Gene trying to convince me to quit fighting and go into Hollywood stunt work. I’m still calling it a double wrist lock, just so you know.

It’s with immense sadness to hear about the passing of a great man and dear friend, Gene LeBell. I’ll always remember the special times we shared together. pic.twitter.com/IqcuVDIu7O

Rock Rims, author of a number of books about Southern California wrestling:
“The World’s Toughest Nerd” is how I described “Judo” Gene LeBell while being interviewed for the documentary “18th and Grand”.
It was a way of describing the opposing on-screen and off-screen personas of Gene, but whichever persona you were exposed to or appreciated most, there’s no denying that he was a memorable part of growing up for millions of people.
While some of us involved with the 18th and Grand documentary knew for quite some time that Gene had been having health issues and his passing comes as no surprise to us, we are no different than anyone else in that it is hard to say goodbye.
It’s been a long couple of days and I’m going to grab some sleep, but tomorrow I will post a more fitting tribute and profile on Gene and his involvement with the Southern California wrestling scene.
For now, I will say that Gene lived a long and fruitful life, and did so on his own terms. That is all than anyone can ask for, and more than most achieve. RIP

Paul Lazenby, actor stuntman:
My hero.
My teacher.
My inspiration.
My unfailing reminder that I am ugly and nobody likes me.
My friend.
RIP to the world’s toughest man, Judo Gene Lebell.
I’m going to miss the hell out of you.

Jay Tan, MMA promoter:
I’d known ‘Judo’ Gene LeBell was a legend long before I moved out to the West Coast, let alone before getting to meet him. So when he started working our U of MMA shows as a ringside judge, and he actually knew my name, that was one of those moments which 17-year old me wouldn’t believe. Level unlocked.
Gene was a champion, legend, and pioneer in every sense of the word. Not just a guy known and beloved in the SoCal fight and entertainment industry, but a name in global martial arts. First televised mixed fight on TV (vs. Milo Savage, 1963). Pro-wrestling and grappling world champion. Certainly one of the most celebrated stuntmen in film and TV, and an everlasting presence in combat sports history. There’s names to remember, and then there’s names you just can’t forget. Put Judo Gene in the latter category.
But he could also disarm with charm. The man was well in his 80’s by the time I got to meet him, and by that point, he was enjoying the surf of his life along the way. He’d roll into our shows with a big bag of candy to share, maybe a few iron-on patches or cauliflower ear pins to give out, and his dear wife Midge by his side. He always feigned like he was about to tell a joke, or was looking for a way to pull a prank (even if he wasn’t). His reputation preceded him, and if you knew his name, you knew that this octogenarian could still break your bone or put you to involuntary sleep at will. But he also liked to play the clown, and it was this gentle-yet-mischievous persona that lightened the atmosphere.
I’d say they broke the mold with Judo Gene, but chances are he did it himself. They just don’t make ’em like him anymore. RIP.

Jack Gill, stunt coordinator:
Gene LeBell has passed away. Gene had the biggest heart for all people and our business and gave back at every chance he could. He has been imprinted in everyone that was fortunate enough to meet him and know him. God Speed Gene. I know you’re doing wheelies on a dirt bike in heaven right now.

Joseph Lee Michael, fighter:
Hello Ladies and Gentlemen just found out tonight that we have lost another Icon, Mentor, Papa ! Uncle Judo Gene Lebell very Sad News my condolences to his Family and all the Warriors that this Beautuful Mentor Talented Loving Soul has touched and instilled something positive in your Life ??. May he continue to watch over all of us Amen.  like he has Always I know you have touched so many Individuals life ! It was a true honor to have met you , thanks for the Patches and those Monday Night Training sessions with Gokor and Always being so kind at The Fights while you Judged.

RIP Gene LeBell. I wrote about Gene in my book SHOOTERS, a man so tough he wore a pink judogi just hoping someone would give him some crap.

Also, his instructional taught the truly deadly holds like the nose rip.

What a character he was. pic.twitter.com/sJT3mFn3Mt

George Fitzgerald, mixed martial arts:
I awoke this morning to the very sad news that Gene LeBell had passed away. Judo Gene LeBell, or simply Uncle Gene to those who knew him, was a giant of the Martial Arts world for many years and he was widely acclaimed as the Toughest Man Alive!! A teacher to the greats, including Bruce Lee, he appeared as a stuntman or actor in 100s of movies and TV shows.
Ever since my late teacher and friend Larry Hartsell introduced me to him in 2005 at the Black Belt Festival of Martial Arts in Los Angeles, Uncle Gene was the very first to send me a Christmas card and one of his famous patches every year, right up until the last few years when his health was faltering.
Uncle Gene, may you Rest In Peace

Cris Cyborg Justino, mixed martial arts:
Judo Gene Lebell impacted so many lives through his kind, caring, and loving soul. It is through those memories his legacy will become legendary and forever remembered. RIP and prayers to all who loved him #rip #ripgenelebell #ripjudogene #judogene

Teal Piper, wrestler, daughter of Roddy Piper:
Uncle Gene, there wasn’t a man dad respected more. U trained him & others that became the best of the best. We will always remember your contributions to the world of Judo, wrestling & stunts. Hope you’re having a laugh w/ dad right now. It was an honor to know u. #RIPGeneLebell

Triple H, wrestling:
Gene LeBell remained a towering figure in the history and expansion of mixed martial arts and sports entertainment. A teacher to many of the sport’s greats, his influence is felt throughout @WWE to this day. Our thoughts are with his family and loved ones at this time.

AEW joins the wrestling world in mourning the passing of “Judo” Gene Lebell. Our thoughts are with his family, his friends and his fans. pic.twitter.com/epDTGpY16q