Rassler From Renfrew a historical gem

Of all the autobiographies, diaries, and glimpses into life in the wonderful world of pro wrestling, it may be that Gary Howard’s book, The Rassler From Renfrew, is the most original, comprehensive, and downright impressive of them all. 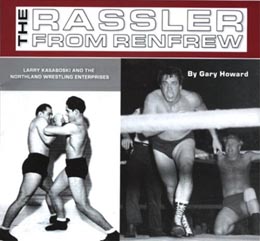 Focused on Larry Kasaboski and wrestling in the Ottawa Valley — where Renfrew is located — and Northern Ontario, beginning in the depression years of the 1930s, Gary Howard’s masterpiece is an important resource for any aspiring wrestling historian or fan who wants to develop a deeper appreciation for wrestling’s rich history in Canada.

While many will point to Heath McCoy’s Pain and Passion: The History of Stampede Wrestling book as the most impressive of its kind, one could argue that this one tops even that historical gem. Perhaps the most impressive aspect of this project is the fact that it breaks new ground. Howard dug deep and left no stone unturned while compiling this book. In it, you will find unbelievably rare photos, posters, and other memorabilia previously unavailable or otherwise near impossible to find for the casual fan. But now it’s all here in 151 spellbinding pages.

“It took a lot of digging but I tracked down the pics and memorabilia through former journalists, arena managers, family members, and lots of research at the library and through newspapers. The North Bay Sports Hall of Fame (Peter Handley) was particularly helpful,” Gary Howard told SLAM! Wrestling.

Many casual fans would probably pass up the opportunity to read this title, because on its surface wrestling in Northern Ontario might not spark much interest in most. That would be a mistake. The Rassler From Renfrew is chock full of interesting stories involving more well known names, such as Ronnie and Terry Garvin, Andre the Giant, Dory and Terry Funk, “One Man Gang” Don Evans, Stu Hart, Adrian Adonis, Abdullah the Butcher, The Rougeaus, Killer Kowalski, Pat Patterson, and even Ric Flair. The list goes on and on.

“For many older wrestling fans it will be a trip down memory lane. But I also wrote it for the younger fan so that they will get a sense of history and truly appreciate the roots of pro wrestling. Without the little promotions like Northlands pioneering the game, there would be no WWE today,” explained Howard.Amazingly, Northland Wrestling Enterprises seemed to have slipped through the cracks of history, and you would be hard pressed to find any information at all about any of the history that unfolded in the Ottawa Valley and Northern Ontario. This was undoubtedly one of Howard’s motivations to take on this project.

“Larry Kasaboski’s promotion operated for 35 years, yet no one had recorded an historical account of the territory. I resolved that it would not be merely a footnote in history… there were many stories to be told and many careers to be highlighted. I was aware of the promotion all my life and wanted Northlands to be afforded the same respect and prominence that the other great North American territories had received,” Howard said.

Certainly though, a book so intricate and comprehensive would not be possible to compile without some help. Howard consulted everyone that he could to check his facts and gain new perspectives.

“Larry’s daughter Kim; Larry’s nephews and nieces. Frankie Hart’s sons Harry and Dave and granddaughter Kathy. Benny Trudel’s daughter Jackie. Former wrestlers Bill Curry, Ronnie Garvin, Cowboy Bob Kelly, Duncan McTavish. The list is endless but without the family members and wrestlers, the story would not be as credible. [SLAM! Wrestling]’s own Greg Oliver has been my ‘wrestling encyclopedia,'” he boasted.

In doing the amount of research required to assemble the amount of information included in this book, you might be surprised to hear what Howard found to be more compelling than anything; it is an aspect of the business that most wrestling critics fail to grasp — the positive emotions tied to the business.”The sincerity and modesty of the old time wrestlers. Many told me it evoked mixed emotions — tears, laughter, sadness. All endorsed the story as an accurate and honest account of those days. Surprisingly no one had a bad word to say about Larry. If anything, it was said he was kind to a fault.”

Indeed, history is a valuable tool that enables us to look into the past and track our progress up until the present day. In doing so, we can certainly conclude that wrestling has come a very long way since the days of Kasaboski’s Northland Wrestling Enterprises. But with progress comes sacrifice. Howard suggests that as compared with the old days, there is a lack of bonding between wrestlers today, as well as an unfortunate lack of attention given to families.

“The business today is business with little thought given to the families until tragedy occurs. There are still close bonds today but in the earlier era whole families bonded. Wrestlers’ offspring married each other; Dory Funk Sr.’s boys Terry and Dory Jr. spent several years as young boys in North Bay. The children of the wrestlers formed strong friendships, some of which still thrive today. The lack of this closeness does not appear to have impacted on the fan base or the financial fortunes of today’s wrestlers but perhaps they are not as rich in human relationships.”

The Rassler From Renfrew has received nothing but rave reviews from anyone who has read it. SLAM! Wrestling’s own, Greg Oliver, who had his brain picked on more than one occasion during the compilation of the book, read the final copy from cover to cover and was amazed at the sheer amount of information included.”I can tell you that it is THE most complete book about any promotion out there; it gives a far better picture of the day-to-day running of a promotion during its entire history than any other book,” Oliver raved.

It is reviews such as those, remarked Howard, that made the project worthwhile.

“The book has been warmly received by all those who were close to the wrestling scene in that era. That in itself has been the most rewarding part of the whole exercise.”

Following the success of this project, Howard is now working on a non-wrestling project. He also writes a column for the Pembroke Daily Observer. While currently he has no plans to embark on another journey into the depths of wrestling history, he hinted that “another wrestling book is not out of the question. It is an entirely fascinating subject.” Wrestling fans can only hope that after such an incredible contribution to the wrestling community, more will follow.

MARK XAMIN overcame an injured hand to persevere and deliver this article. Huzzahs can be emailed to him at [email protected].