Onward and upward for Kim and TNA Knockouts

The women of TNA have worked hard over the past two years to keep the spotlight on the wrestling, overcoming the bumps on the road along the way. The former women’s champion, Gail Kim, says that the Knockouts have no intention of resting on their laurels.

“Now all I hear is how everyone loves the Knockout division, how they love watching the women wrestle, and we’re getting the highest rated segments on the show. Everything is going as I imagined and dreamed of,” Kim told SLAM! Wrestling, with great satisfaction. 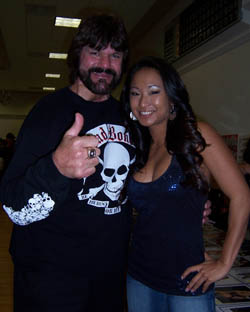 Sunday night, one of the feature matches at the Destination X pay-per-view pits the Knockouts champion, Awesome Kong, against Kim and O.D.B. in a triple threat match.

Working with the much-bigger Kong (Kia Stevens) is a challenge, she admitted, but believes that Kong also brings out the best in her.

“Wow. I really do love working with her to be honest,” Kim confirmed. “All these girls are just so talented, you know she came from working in Japan and I love being physical. I love the physicality of wrestling and with her, we’ve just had these amazing matches and I’m very proud of them and couldn’t have done it, really, without her.”

But she has to share a dressing room, so it’s not fair to just talk about how awesome Kong might be.

“I think all the girls are all talented in their own way,” she added. “I think we’re all individually unique and there’s so many characters and everyone’s got a different style of wrestling and I just think I’m working with a great group of girls in general.”

Then there is One Dirty Bitch (Jessica Dalton). “ODB’s so over with the fans, it’s ridiculous,” Kim said. “I think it’s because she is this nutty wacky girl. I feel like a lot of the wrestling fans can really relate to her too. They love her nuttiness and I think they can relate to her being like the alcohol drinking (girl). She grabs her butt, she grabs her boobs, she’s just crazy and I think the fans really love that.”

Kim also added that the distinct personalities of characters like O.D.B. and Awesome Kong help keep things interesting. “If you look at all three of us, we’re all so different,” she said. “I think people love the fact that we’re different and they can relate to either one of us in one way, or in another way, so I just think we really have so much to offer.” 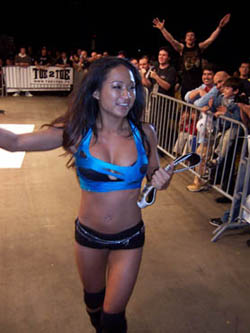 Gail Kim on her way to the ring. Photo by Mike Lano, [email protected]

Walking down the aisle as a bonafide babyface feels like fresh territory for her to explore. “This is my first real run as a babyface, and maybe people were just waiting for it because I’ve always been a heel and my wrestling style is very babyface, a lot of high flying stuff. I think nowadays wrestling fans like to see that,” she observed.

It’s been a long road since her initial push in WWE as women’s champion right off the bat. In fact, given the decimation of the WWE’s women’s division with the retirement / release of many stars (Kim, Trish Stratus, Molly Holly, Lita, Ivory) and the decision to hire models and train them to become wrestlers, it’s not really a surprise that it affected Kim’s passion for the business — so much so that she took a year off before returning to Nashville.

A skeptical Kim joined TNA in 2005 primarily on the basis that the women would get their shot once their TV show and its logistics were solidified. Kim and the women were determined to make sure TNA kept their end of the bargain. “I don’t know if there was any particular situation, I think there was a lot of just being persistent,” said Kim from her Tampa, Florida residence. “To the point where they’re like ‘Okay, Gail, we’re sick and tired of hearing you bug us about this,’ and just me saying “I wanna wrestle, I wanna wrestle, I wanna wrestle.” And you know the other girls that were there wanted to wrestle too like Traci Brooks and then they brought in Jackie (Jackie Moore); Jackie’s been wrestling forever. I’m just so glad they gave us the opportunity at least to prove ourselves. I think we just changed a lot of people’s minds and that’s the biggest accomplishment for us.”

The feud with Moore would give professional wrestling a rare women’s steel cage match at the TNA Lockdown pay-per-view in 2007. 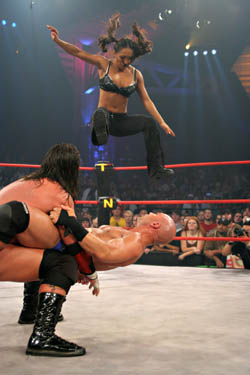 Gail Kim in action with TNA — not afraid to mix it up with the men. Courtesy Gail Kim

Kim shot down rumours of TNA creating a second show for the Knockouts. “I heard the rumours that you guys heard, and I know that fans were interested and were talking about it,” she acknowledged. “But I don’t think it’s going to happen. I think they are just rumours; I don’t see that happening anytime in the near future.”

She also put to rest the rumours regarding Angelina Love, who suffered a concussion in a match against Kong recently on a taping. “She seemed fine the very next day. I texted her, and she said she’s good. Sometimes that kind of happens in wrestling. You hear a lot about concussions. And you know I had a minor concussion one time too (against Kong). It’s not a pleasant thing, but wrestling isn’t ballet. It’s a very physical, high-risk job.”

Kim appeared at the WrestleFest fan show in California last weekend meeting the fans, and putting on a great match against Candice LaRae. It’s obvious that the passion has long been rekindled, beginning with a degree of intrepidity to join TNA and prove to the office in the ring the need to build a different kind of beautiful.