Wrestler’s Court: The Russians are coming … or not 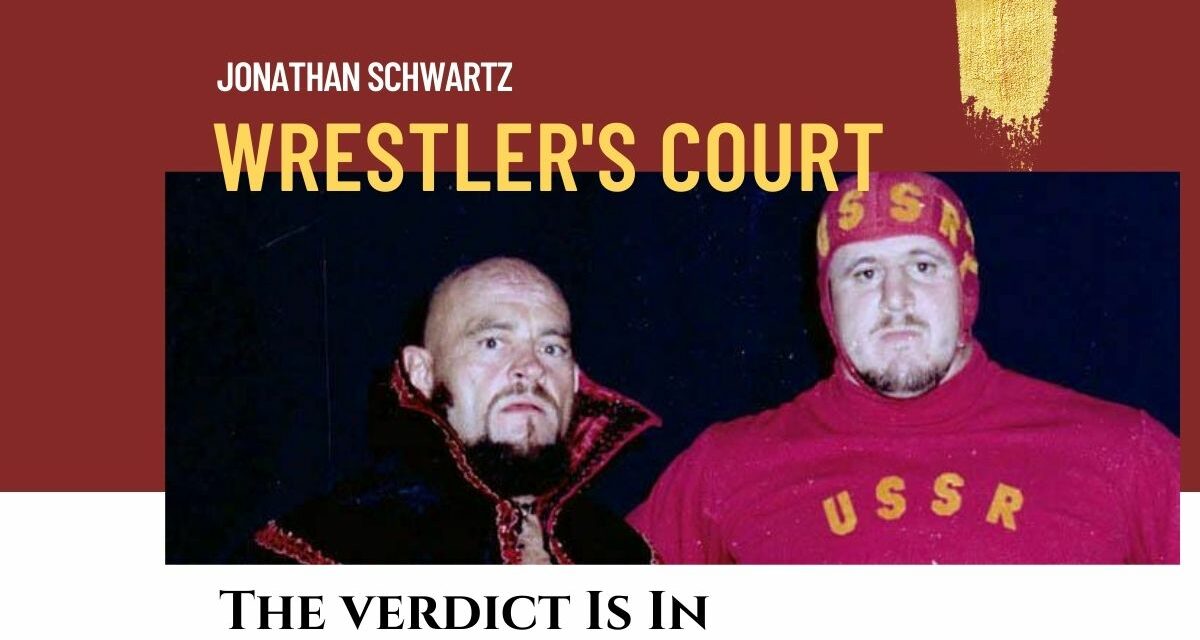 Professional wrestling has a weird relationship with reality. Inside the ring or on the microphone, wrestlers behave in ways that would get most of us confined or arrested; from screaming promos to the series of staged, underwear-clad assaults that make up a match.

Over the top characters are part of the madness, one key trope being the “Evil Foreigner.” This type of character has been part of wrestling since before television. Wrestlers, legitimately or not, would claim to hail from the farthest reaches of the globe in order to appear exotic. Often, they’d be from down the road in New Jersey like ‘Manchurian’ Gorilla Monsoon, or if they had a funny accent, Quebec. If a suitable location couldn’t be found there was always ‘Parts Unknown.’ which has probably produced more talent than any other wrestling hotbed.

But very often these fabricated places of origin would be very well known, ripped from the headlines to generate heat. Since the advent of television wrestling has seen a succession of these gimmicks; ‘German’ Nazi villains and devious ‘Japanese’ heels persist on the indies to this day and were a fixture well into the 1980s boom. During periods of Middle Eastern hostility Arab and Iranian wrestlers like the Original Sheik (a Michigan native who billed himself as hailing from Syria, despite actual Lebanese ancestry), Sheik Adnan Al-Kaissie, General Skandor Akbar and the Iron Sheik played key roles in getting all-American babyfaces like Sgt. Slaughter or the Von Erichs over. (Notably, Von Erich patriarch Fritz worked a Nazi gimmick early in his career and never bothered changing his ring name even as his children ascended to various levels of stardom.) 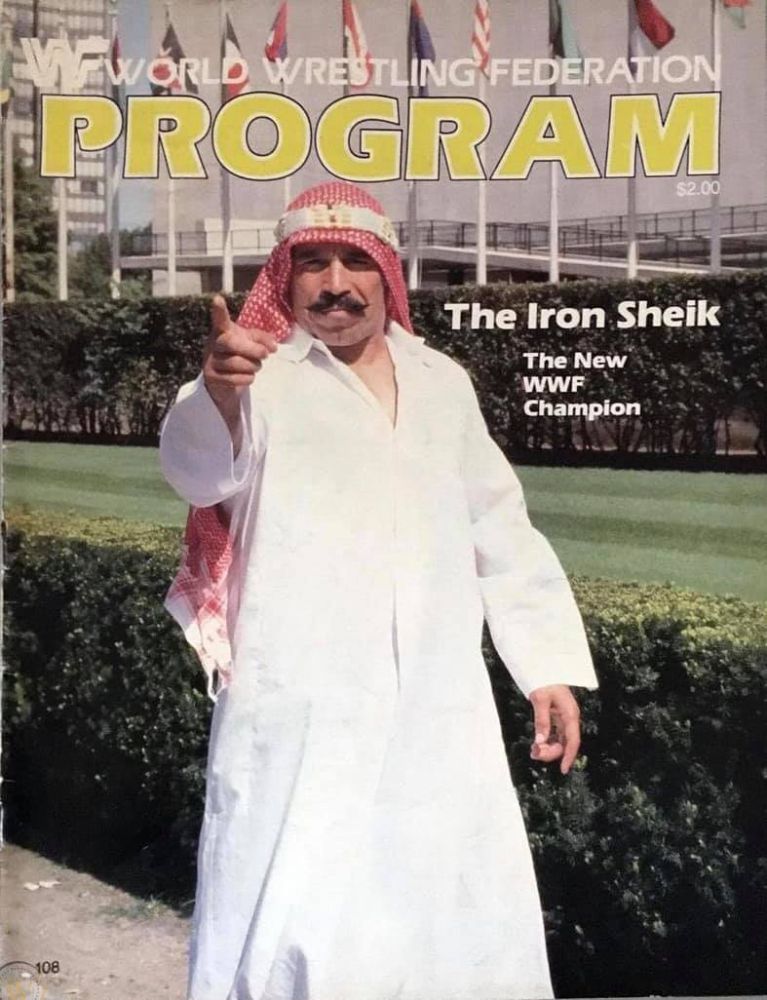 Coinciding with wrestling’s love affair with television, the US-USSR Cold War has been a staple of professional wrestling at its highest levels.

Professor Boris Malenko switched allegiances from Germany to Russia in order to capitalize on fans’ ire (since he was Jewish, playing a Stalinist heel was probably marginally less objectionable than a Nazi one) and had a successful career as a bloodthirsty Soviet madman, though that tie-in wasn’t played up during his entire career.

Ivan Koloff (in actuality a French-speaker from the Ottawa valley) repackaged from his original ‘Irish’ Red McNulty gimmick) accomplished the impossible. In 1971 he ended WWWF Champion Bruno Sammartino’s seven-plus year reign and stunned a packed Madison Square Garden crowd into silence. He would go on to lead a faction of faux Russians across the NWA, winning titles as he went.

Croatian-born Josip Peruzovic traded his tag-team gold winning Mongolian persona for the Russian identity of Nikolai Volkoff and worked as a brutal heel until the fall of the USSR led him to his own personal perestroika and a brief babyface run in the name of US-Russian friendship. Uncle Ivan’s nephew Nikita was similarly retconned into a Lithuanian when the Soviet Union fell.

The Russian heel has become a pro wrestling archetype, but dodgy geography and changing public sentiments had rendered it mostly obsolete. Pro wrestling plays to a broad audience. It is often slow to adapt to complex geopolitical realities and works best when it tells simple stories about good and evil. With exceptions, the evil Russian heel faded into the margins of the independent scene where Koloff, Volkoff and their contemporaries could still get heat for wearing red trunks and singing a defunct national anthem. 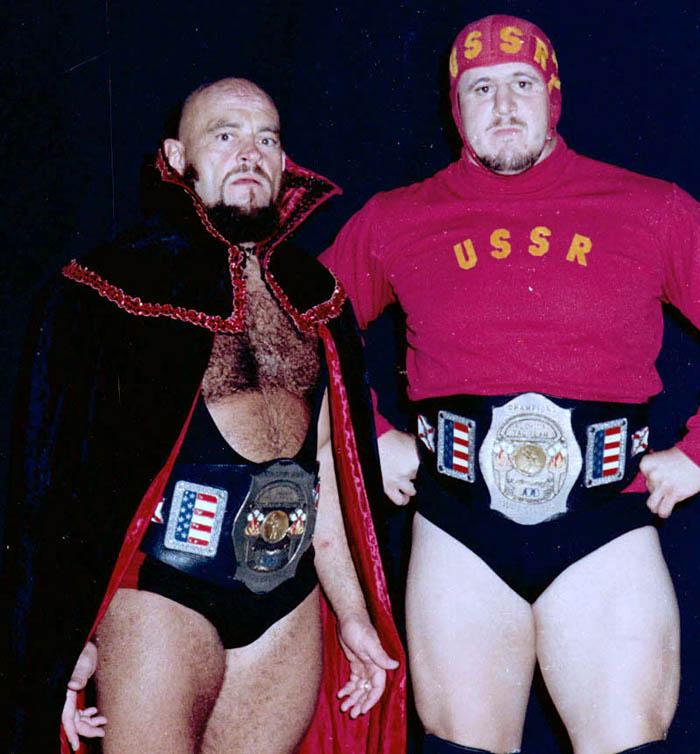 ‘Evil Foreigner’ gimmicks play on the crowd’s xenophobia and in some cases outright racism. It’s tough to hear Gorilla Monsoon talk about Japanese manager Mr. Fuji (who was born in Hawaii) ‘Pearl Harbor’ an opponent. While professional wrestling has at best a complicated relationship with race, these gimmicks have proven increasingly tricky for promoters to navigate effectively. More recent attempts to revive it included Ludvig Borga, a Finnish brawler with an environmental bent (who actually held some pretty odious personal beliefs), Yokozuna (a member of the Samoan Anoa’i dynasty repackaged as a sumo wrestler) and Crush (who was depicted as a ‘Japanese sympathizer’ despite the absence of a current conflict between the US and Japan). Yokozuna became a multi-time champion because of his ability and the spectacle of his size, but for the most part these gimmicks were just ineffective in a changing world.

Worse, some latter day attempts to bring back the foreign menace were outright offensive. At the height of the first Gulf War, Sgt Slaughter went from American hero to World Wrestling Federation champion and Iraqi sympathizer during a critically and commercially panned early 1990s angle (which brought back Adnan Al Kaissie as his General and led the Iron Sheik to switch sides from Iran to Iraq as Col. Mustafa). Japanese wrestler Kenzo Suzuki was initially introduced by the then WWF as “The Bronze Warrior” Hirohito (I kid you not. They tried promoting an actual Japanese wrestler under the name of the Emperor who served as Japan’s Head of State when it aligned with Nazi Germany during World War Two). In the wake of September 11, the character Muhammad Hassan was introduced-initially a semi-sympathetic heel disaffected by the treatment of Arab-Americans, then made more sinister until he was removed from television once he was made into a terrorist himself. Crowds hated these characters, not as heels on a wrestling show, but because of their blatant cluelessness. Apollo Crews kept his name but leaned into his Nigerian background when he turned heel, complete with accent, flag-inspired tights and an ineffectual giant bodyguard. Most recently, Austrian grappler WALTER was abortively repackaged as “Gunther Stark” without WWE recognizing that this name was shared with a Nazi official, as is “Ludwig Kaiser.” Imperium stablemate Marcel Barthel’s new name on Smackdown, which has yet to be changed. Walter is now just Gunther, and we’ll see about Ludwig.

WWE seems to have a bad track record with Ludwigs.

Which brings us back to Russia. WWE has tried bringing the Evil Russian gimmick back as well, most recently with Bulgarian brute Rusev. Now going by Miro in AEW, Rusev was initially marketed from his actual home country (alongside his American/‘Russian’ manager Lana). During a brief period of tension between the US and Russia Rusev ‘moved’ to Moscow and wore a medal presented to him by Russian Federation president Vladimir Putin. In reality, he lost the medal at a bar and reverted to his Bulgarian roots soon after, but not before he drove a tank in a loss to the patriotic John Cena at WrestleMania. 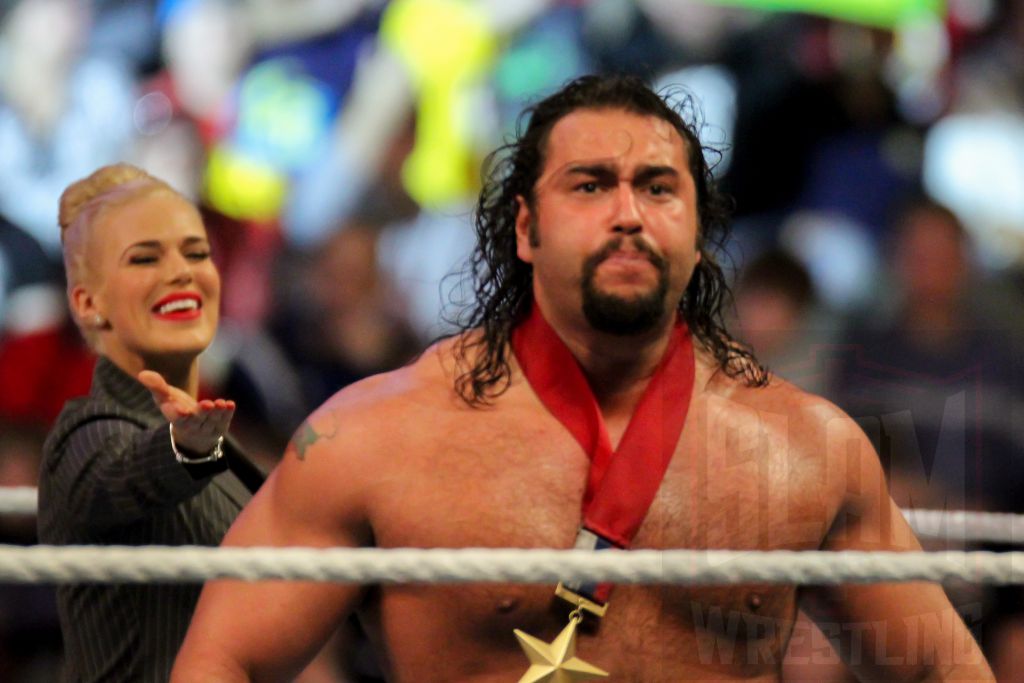 Lana and Rusev — with his medal — in Dallas, in January 2015. Photo by Bill Otten, B&B Productions.

Rusev’s gimmick was silly, but comparatively low-stakes… but current political events, where news cycles are dominated by coverage of Russia’s incursion into Ukraine, with international condemnation following make one wonder when and if WWE will try to bring this formula back again.

Some have suggested WWE‘s hesitancy to do so thus far owes less to conscience than to apparent political ambivalence in the US to the situation in the Ukraine, given alleged ties between the Russian government and some prominent politicians including former President Trump (a friend of the McMahons, who hired Vince’s wife Linda McMahon as the head of the US Small Business Administration during his tenure, and who spearheaded fundraising for Trump’s campaign in the most recent Presidential election). Either way, WWE has not yet introduced such a character, and one wonders if it did how it would be received.

While WWE has thus far shied away from the invasion of Ukraine for character and storyline purposes, some of the more prominent wrestlers who claim Russian heritage have worked hard to distance themselves from what the world increasingly sees as a massacre. 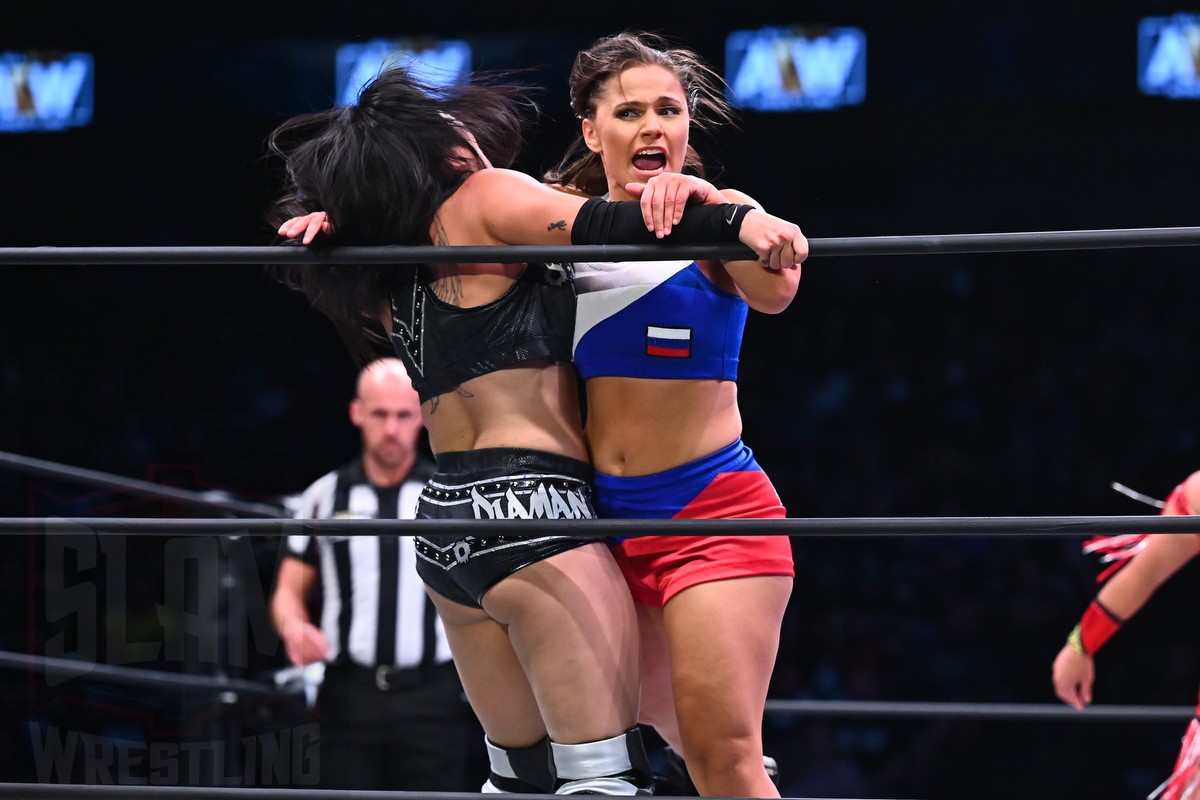 Leyla Hirsch, in her Russian-inspired outfit, runs into Ryo Mizunami at an AEW Dark taping in October 2021 in Orlando, FL. Photo by Joe Hrycych, www.hrycychphotography.com

Perhaps the most visible Russian-born wrestler right now is AEW’s “Legit” Leyla Hirsch. Having recently turned heel, M. Hirsch seemed primed to make her way up through the AEW women’s division. Perhaps in line with AEW’s general sensitivity to world events and audience sensibilities, it seems like her push has been placed on the back burner — and she recently suffered an injury. Ms. Hirsch acknowledges the challenges she faces and the seriousness of the situation in Ukraine in a tweet posted March 10, in which she writes:

I want to make something very clear. I stand with Ukraine one hundred percent and my heart breaks for its citizens who are suffering at the hands of Vladimir Putin. I was born in Russia. I came to the US at eight years of age and became and American citizen. I cannot change my heritage any more than any citizen can change theirs. The mere fact that I was born in Russia does not mean that I support this brutal dictator. Everyone who would even suggest such a thing is simply wrong, plain and simple.

The NWA’s Natalia Markova and Impact’s Masha Slamovich have both de-emphasized their Russian ancestry of late, and have been less prominently featured within their respective promotions as well.

If performers and promoters are hesitant to take advantage of world affairs, they are not alone. Russia faces increasing isolation on all manner of political, economic and cultural fronts. On February 22, FIFA and UEFA announced the suspension of Russia and Belarus from international play, including football’s World Cup. On April 20, Wimbledon banned Russian and Belarusian players over the invasion of Ukraine.

Russia, real Russia, finds itself increasingly a pariah state. Professional wrestling requires suspension of disbelief. Today’s political realities may just get in the way…
And that’s where I was going to end this piece… until I remembered an exchange between Nikolai Vokloff and Fred Blassie, told from Blassie’s perspective in his autobiography and from Nikolai’s in an interview.

Blassie managed Nikolai Volkoff during his WWF heel runs-first in 1974 against Bruno Sammartino, and later during his tag team championship and feud with Hulk Hogan in the 1980s. When first asked to play a Soviet, Volkoff expressed concern. A Croatian immigrant, Volkoff defected to Canada in order to escape communist rule. However, as recounted to this site’s Steve Johnson, Blassie taught Volkoff the value of playing this part: “He said, ‘If you hate communism, that’s how you destroy it, [by telling] people how good it is over there, so they know you’re lying,’”

The threat emanating from Russia today may be less about communism than its ghosts. The reality faced by those on the ground in Ukraine cannot be done justice in a column about pro wrestling, but it’s worth noting that media is often a battleground in modern conflicts. Russia has censored its media outlets and what the public is receiving falls well short of actual news. Here in North America we have access to a free press, but time and interest vary: there’s always a celebrity trial or award-show beatdown competing for our attention. While professional wrestling has a decidedly mixed track record in how it captures world events, every once in a while it has an opportunity to raise awareness even as it provides an escape. Perhaps many recent Evil Foreigner gimmicks have failed in part because they weren’t based in real antagonism. Finland, Nigeria, Austria and Bulgaria are generally not seen as threats… but when a world power actually rises to destabilize world politics, we should all take notice. And maybe pro wrestling has a role to play after all.

Captain America fought a lot of Nazis, too.